Trending
You are at:Home»TENNIS»TENNIS: WIMBLEDON 2018 UPDATES
By Karen Salkin on July 9, 2018 · TENNIS

Today is the crazy day that all thirty-two singles players who are left in this most venerated tournament play. So, ahead of it, here are my thoughts on the first week. 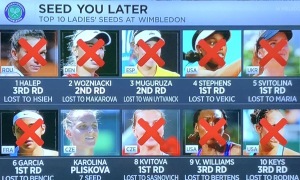 All the Top Ten Ladies seeds who are gonzo in the first week!!! Photo by Karen Salkin, as is the big one at the top of this page.

So far, so good, for The Stranger I Love Most, Roger Federer. (And let’s face it—that’s all I care about where tennis is concerned.) But so much else has been downright crazy. Nine of the Top Ten ladies seeds (including the very top one) have already gone out, and many other seeds have, as well, in both the Mens and Ladies competitions. I don’t think it’s ever happened before that only one Top Ten seed made it to the Round of 16. Wow. I honestly cannot believe what I’m seeing!

Back in the States, on my block to be exact, we had a terrible power outage during this worst-ever heatwave, so I don’t have time to get fancy with this up-to-now review of Wimbledon; I’m just giving you my brief raw notes as I took them as the tourney went along. I’ll get more in-depth about all the goings-on in my Wimbledon Wrap-up next week. 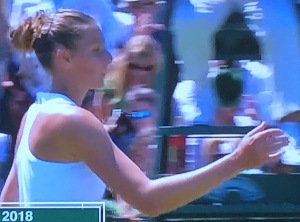 This photo doesn’t make it very clear, but I think you can make-out that her fingers are white while her hand is tan. Photo by Karen Salkin.

This is a first for me, in all these years of tennis watching: Karolina Plishkova’s hands are tan, while her fingers are not!!! It makes sense, since their fingers are curled around the racket, and the hands are exposed; I’ve just never noticed it before.

Roger is rocking the shiniest hair ever!!! Loving it.

Serena Williams wore tights in her first match!!! And long sleeves! In 90 degrees! What the heck was up with that??? 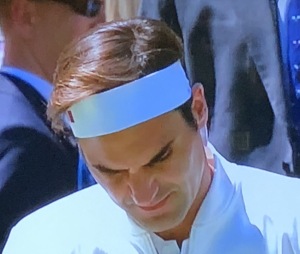 Why does Bethanie Mattek-Sands (who’s playing doubles here and also commenting a bit) keep leaving the “ed” off the end of her words? Tonight she said someone was “seed” instead of “seeded,” and later that someone was “cool, calm, and collect” instead of the correct “cool, calm, and collected.” Maybe she hates a guy named Ed so she doesn’t want to say his name. I can’t think of any other reason for that bit of illiteracy.

Vika Azarenka is such a grown-up now. Her looks, especially her now-skinny body, have changed so much since she became a mother. It’s neither good nor bad; it’s just an observation. 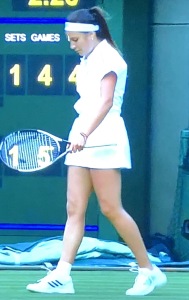 I wish the refs would stop calling Serena Williams “Mrs. Williams.” She’s Miss Williams!!! She’s Mrs. Ohanian, if they really feel the need to call her “Mrs.” something.

Elena-Gabriela Ruse’s dowdy Adidas outfit looked like she bought it at the 99cent store. It made the poor girl look like SpongeBob SquarePants!

I’ve always wondered why many of the girls, even the skinny ones, have little bellies sticking out. But I just realized that it may be all the water they’re drinking.

Nothing against Garbine Muguruza at all, but what is up with her underpants? They look like a diaper. It’s yet another weird outfit from Adidas. (See Monday’s last comment, above.)

I’m begging someone to tell Nick Kyrgios that he needs to fix his hunched-over posture before it’s too late! He’s only twenty-three, but he stands like an eighty-five-year-old. At least it makes me straighten-up whenever I see him.

I love Marcos Baghdatis. What a nice guy. He’s always caring to his opponents, win or lose. All the players should be like him.

What is up with Maria Sharapova’s armpit “boob”??? She’s not fat at all, but I’ve never seen that particular body phenomenon on any tennis player before!!! I guess she’s so focused on her game that she didn’t feel it happening, or else she just didn’t care about it enough to fix the situation. 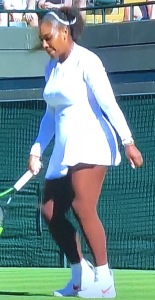 Commentators Chris Fowler and Chris Evert tried to make it like Roger Federer respects Serena Williams because Serena said that she’ll play as long as Roger does. She said, “We’re in it together.” That doesn’t mean that he respects her. Actually, that whole scenario was news to Roger, and when asked about it in his press conference, he didn’t say anything at all that would indicate he cares about her one way or another. He said her plan to do that is not necessarily a good thing, and that she was probably joking anyway. He said nothing about even knowing her, let alone respecting her. I hate when these idiots put words in athletes’ mouths.

But this is the best that Serena has ever looked, off the court. (She’s a mess on it, though. And why does she keep wearing a filthy bit of cloth on her head???) 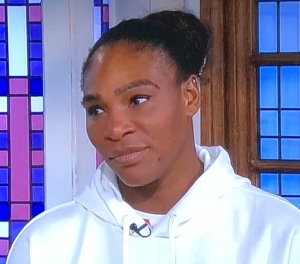 The best Serena has ever looked!!! Photo by Karen Salkin.

I’ve tried to not complain about ESPN’s annoying studio host, Chris McKendry, for these first three days, but I just can’t take her illiterate mispronunciations anymore! She insists on adding an “l” to the end of “saw” and “draw!” Who does that??? How stupid is she??? And it’s not like she hasn’t been corrected about it—I, for one, have done so on Twitter a couple of times a year!

John Isner proved himself to be a bad sport in his match against Bemelmans, even though he won it, so now I’m a bit against him. 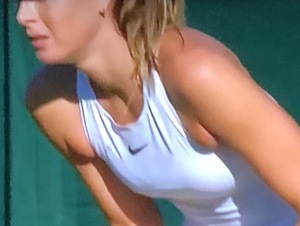 Maria Sharapova’s armpit boobs, that I referenced above. Photo by Karen Salkin.

And so is Caroline Wozniacki. She came in as the #2 seed, but was beaten by Ekaterina Makarova. And then, in her post-match press conference, Caroline said she doesn’t think that Makarova will go very far in this tournament. Nice girl, eh?

This was shocking, (but I’m sure no one else even noticed!): Not one person asked for an autograph from either Johanna Konta or Dominika Cibulkova after their match on Center Court!!! I’ve never seen that before. (And, even though she lost, Konta is one of their fellow Brits!!!) 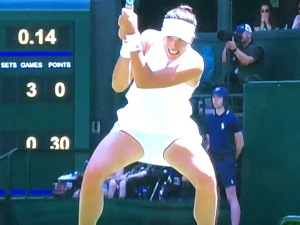 Garbine Mugurza’s crazy Adidas underpants, that I referenced above. Don’t they look like a diaper?! And a full one, at that!!! Photo by Karen Salkin.

Perhaps the worst sport of all in this tourney is Madison Keys. What a bi-atch. When she lost a crazy, but well-fought, match, she flew off the court in a nano-second, when at Wimbledon, you’re supposed to wait for your opponent to walk off together.

Mary Jo Fernandez is the best commentator, by far. She’s usually very fair and, even though jingoistic, not creepy about it, as the others are.

I finally have a favorite among the young ’uns. Actually, two of them. Greek guy, Stefanos Tsitsipas, is adorable, and nice to his opponents, sort-of like Marcos Baghdatis, from neighbor Cyprus, is. (Now I know why everyone loves that area of the world!) And I’m also into Mckenzie McDonald from America for two reasons. One is that he went to my beloved UCLA, and the other is that Roger chose him to practice with. And if he’s good enough for The Stranger I Love Most, he’s good enough for me. 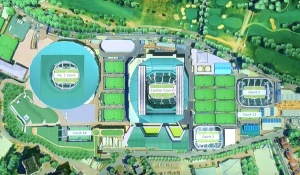 A great shot of the set-up at Wimbledon. Photo by Karen Salkin.

The most exciting match, so far, was the Third Round one between #1 seed (and #1 in the world!,) Simona Halep and low-ranked Hsieh Su-Wei from Chinese Taipei. It was so dramatic, and we never knew just who would come out the victor for the entire three sets. When Su-Wei hit a fault on her first serve at match point, and the audience gasped, she just smiled and acknowledged them, even though her very next serve would be one of the most important ones of her career. And then…she won! She beat the #1, who had, coincidentally, just won the French Open three weeks ago. And the crowd went wild! So, good for her. As Chris Evert pointed-out, she held her nerve till the end. 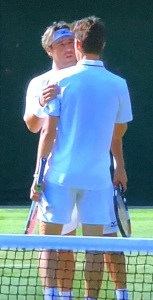 Marcos Baghdatis comforting his opponent who had to default, as referenced above. Photo by Karen Salkin.

And then she did nothing I’ve ever seen before—when she signed the autographs after the win, she made sure to give each fan back his or her own Sharpie! (They usually just give the first one back at the end, to anyone who was around, with no regard as to whom it belonged to.) And she stayed there signing them for the longest time I’ve ever seen.

And in her post-match interview, she was absolutely adorable! I guess she’s who I’ll be rooting for this week, all the way.

I also give Simona major props because, even though this was a pretty bad defeat for her, she still waited on court for her opponent so the two ladies could walk off together. Yes, that is exactly what all the players are supposed to do, but very few of them are good sports like that.

Now I just have to worry because it seems like all the women who would be able to beat Serena have been knocked-out in the first week! Oysh. 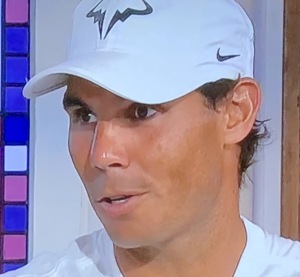 I must say that I’m impressed with how much, and how well, Rafael Nadal speaks English these days. And, unlike some other players, he doesn’t seem to feel the need to make believe he loves the questions these idiots ask him.

But I think he better start using some sunscreen, pronto. His left cheek looks like it’s desperate for laser resurfacing!

I’m so happy for Angelique Kerber to have come so far back after her fall from her glory days of 2016. (But she is wearing those Adidas “diaper” underpants, too.)

It’s so weird to see my name, Karen, on a male. Really weird. I’ve never experienced that before, in all my years. But Karen Khachanov is Russian, so I guess it’s okay there. And how can I not root for him? 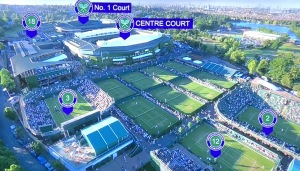 Last mid-point thought on the coverage of this entire tournament: What is wrong with ESPN? They’re making many of the matches available on only their app. Do they really think that we tennis fans want to watch the majority of matches on small devices rather than on our TVs??? Tennis is meant to be watched on as big a screen as possible! They need to show us all the courts on TV.

If you haven’t been following me on Twitter during this fortnight, now would be a good time to start. @MajorCelebrity. We still have a week to go of Wimbledon, directly followed by the Home Run Derby, the MLB All-Star Game, and the ESPYs, beginning the day after the Men’s tennis Final. That gives me lots of opportunities for my favorite bon mots—sports snark!!! I hope you’ll join me there.