Trending
You are at:Home»TENNIS»TENNIS: WIMBLEDON 2017 BEGAN ON MONDAY!
By Karen Salkin on July 5, 2017 · TENNIS

The esteemed British tennis tournament actually began on Monday (because they don’t give a whit about the 4th of July over there,) but I took the entire five-day holiday off, so I neglected to herald the very beginning of the tourney in this e-zine this year. 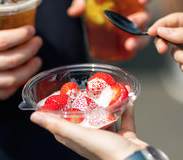 I haven’t gotten to the bottom of it yet, but, for some reason, this Wimbledon is starting much later than usual. It’s usually over around the 4th of July! And just how do I know that off the top of my head? Because I always enjoy strawberries and cream during Breakfast at Wimbledon, (which is the moniker for the last two days of the competition,) and I have such an easy time purchasing those berries because they’re in demand for 4th of July parties!!! But this year, the whole shebang is just beginning on the day before the 4th, so it’s another fortnight until the end. (Do you like the way I slipped that official British terminology in there?) 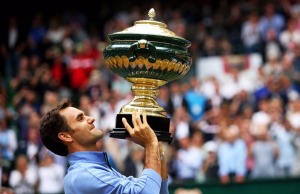 This one is sure to be interesting—the two “oldsters” of the sport, Roger Federer and Rafael Nadal, won the previous two Majors this year, both of which were shocks, so now it’s anybody’s guess just what will happen at Wimbledon. Everyone’s on notice!

I’m always on edge, praying that Roger will come out the Champion. But at least I can relax on the Women’s side—no Serena Williams to root against! She’s preggers, so, of course, she’s sitting this one out. (But I have no doubt that she’ll be back on the tour just as strong within a few months of giving birth. And fans will go nuts!)

So, that’s all I’m telling you for now. But I will be tweeting about the proceedings daily. So, if you don’t already follow me, you may want to do so now. (And, I’d love to have you along!) @MajorCelebrity