I’m sure that I’ll be watching every second of this two week tennis tournament, as I always do, but I’m not looking forward to it this year. I shut my TV the second that my beloved Roger Federer, The Stranger I Love Most, lost the tragic Wimbledon Final last month, and have not looked at, or read, anything to do with tennis since then. Roger may have actually gotten over it by now, but I’m sure that I never will. 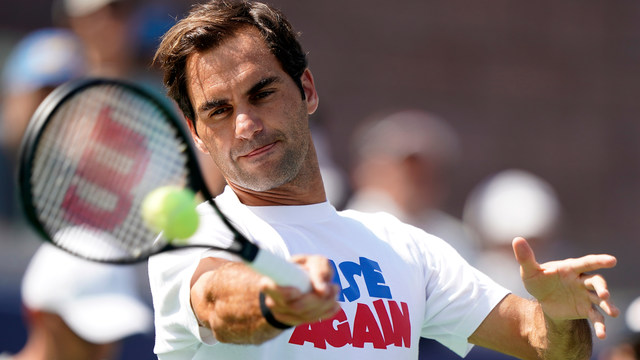 My beloved Roger Federer, of course!

So, since I was in too much pain to pen a Wimbledon Wrap-up back then, (even though I had already written all the notes as the tourney went on,) I think I’ll just summarize those as a prelude to this US Open that’s about to unfold, so you know what to look for if you join me in watching all or some of it.

I’ll make it easy for you to follow by breaking it down in sections:

I realized that the majority of my Wimbledon notes were about how stupid ESPN host, Chris McKendry, is, rather than the tennis action itself! In addition to her always inexplicably adding an “l” to the end of “draw” and “saw,” she said, “curEated” instead of “curated!”  What a moron.

And later on, she said “worldwind” instead of “whirlwind!!!”  I continue to marvel at that she has a job in the public eye! 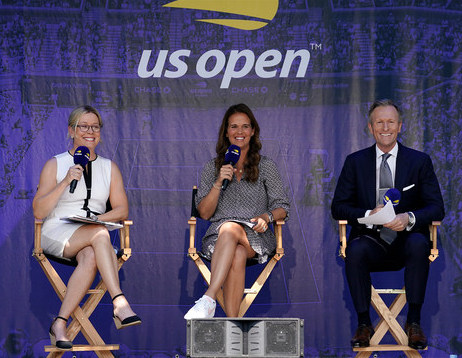 I could do an entire column on how dumb all of these commentators are. Most of them have their on-air jobs, rightly so, because they were famous/popular tennis players back in the day, but how did McKendry get hired for this gig?! She even mispronounces several of the players names. For example, she says “curios” for “Kyrgios,” and “merry” for “Murray!” Ugh.

And Patrick McEnroe says, “We can weary about…” instead of “worry.”  What is wrong with these people???  Did they not go to school?  If they did, were they absent on a ton of days???

And they all need to stop saying “bowed-out” when someone gets defeated.  Bowed-out means they chose to leave! Someone, please give these numbskulls a dictionary!!!

One word about the ESPN producers over there: Why would they blast really loud rock music over their own commentators doing the highlights???  Those doofuses are hard enough to understand as it is!  They rush through the clips, and many of them have difficult-to-understand accents, yet the station chooses to make it hard for their viewers to hear it all! Go figure.

Of course, the only player, on either side, about whom I care is the incredible Roger Federer, who turned thirty-eight a couple of weeks ago, and is still going amazingly strong. I hope he wins the entire tournament! Duh. 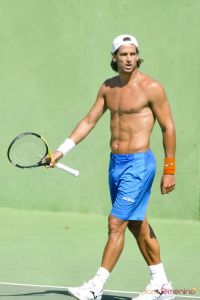 The abs on Feliciano Lopez. Don’t we all wish the men could play without shirts???

The abs on many of these guys are a joy to behold.  I wish they’d wipe their faces more often with the bottoms of their shirts, exposing those six-to-twelve packs!!!

I sure hope that Marco Berrettini from Italy is in this tourney. He’s the first gorgeous player since Mark Philippoussis all those years ago.

I love that Joao Sousa had just gotten the pants beaten off him by Rafael Nadal, but was still good enough to wait to walk off the court together, (as proscribed by the Wimbledon rules,) even though Rafa was totally rude to hold Joao up for five minutes, (I timed it,) while he did his usual crazy changing his shirt in front of everyone!  (On the Ladies side, lovely sadly-defeated Petra Kvitova waited for Johanna Konta, as well.) 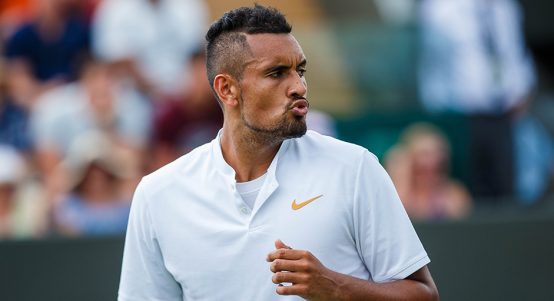 Nick Kyrgios. (That’s him at the top of this page, too, along with The Stranger I Love Most, Roger Federer.)

I’m serious about this: I suggest that former NBA player Ron Artest reach-out to Nick Kyrgios because I think that Nick has a similar psyche to Ron’s before he received help. I doubt that Nick can handle his mental health issues on his own, and perhaps Ron can help him reach his full potential. Or at least more of it. (And Nick is a major NBA fan, so he should be happy for that connection.)

Although I sometimes disagree with Nick’s nutty behavior, I’m actually pretty much a fan. He’s so interesting and entertaining. And honest!!!

I think that the commentators really need to leave him alone already! They’re always saying that Nick needs to work harder. And I say: no, he does not! It’s up to him. I think he plays just because he enjoys it a bit, and is good enough at it. And he makes good money. He doesn’t need to be a Grand Slam champion. He’s happy as he is–he has no great passion for the sport, and that’s okay. It’s nobody else’s business. He’s not hurting anybody, not even himself.

I’m still thrilled for Simona Halop to have won the Wimbledon title!!! Especially over creepy, full-of-herself, Serena Williams. And it was also good for Simona to have beaten young American, Coco Gauff, along the way. Coco is interesting, but I was so sick of hearing about her ad nauseum from the commentators. 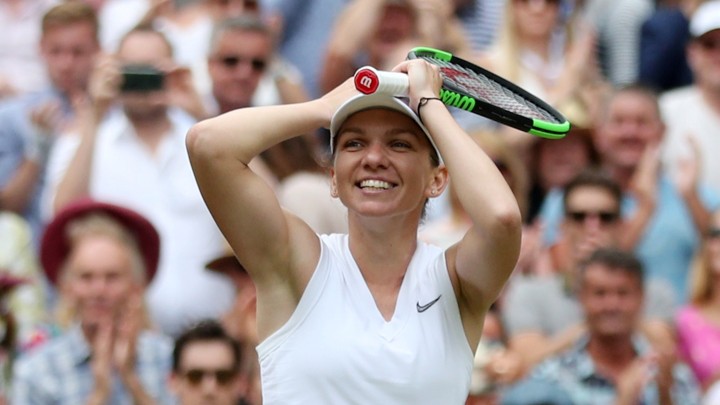 Coco was excellent in that tourney, and it is a fun story, but I got so sick of their constant, (and I really do mean constant,) fawning over her.  Remember all the smoke they blew-up Melanie Oudin’s ass just ten years ago?  That fame ruined her parents marriage, and pretty much destroyed Melanie’s life; she retired at just twenty-five, when most tennis players are just coming into their own. So wasn’t that a lesson to anyone but the unfortunate Oudins??? (Hint to the ESPN peeps.)

In an important match at Wimby, it was so disgusting how much the pair of announcers, Jason Goodall and Pam Shriver, were pulling for Muchova over Pliskova.  Both Karolinas are Czech and nice, so I don’t get what that rooting was about. And commentators are supposed to appear neutral, anyway. (Unless an American is playing, of course.)

I was sad to witness US Open defending Champ, Naomi Osaka, being a bi-atch in England!!!  She didn’t even tell her opponent, Yulia Putinsevea, congratulations on the win! So rude. Mr. X said, “At least she acknowledged the crowd nicely.  Not!!!!” Shame on her. (But she did learn from the best—meaning the worst—Serena Williams, who could not have been a worse sport when Naomi defeated her here last year.)

MY FAVORITE NON-PLAYING PARTS OF WIMBLEDON (outside of Roger making it to yet another Final…at almost thirty-eight years of age!)

My favorite moment of the entire fortnight was when analyst Tom Rinaldi pointed-out that his British compatriot, Jason Goodall, explained that the tea service that we’re all familiar with, (tea sandwiches, scones, desserts,) is called “Afternoon Tea,” not “High Tea!!!”  I’ve been correcting everyone about that for decades now!  So now can all of you please finally stop saying it wrong?!

Chris Evert is so correct about the rule that limits the number of tournaments that teen-agers can play.  Coco Gauff’s coach (and Serena’s, too,) idiotic Patrick Moratiglou, advocates for it to be changed, but obviously that position is only because he coaches fifteen-year-old Coco. 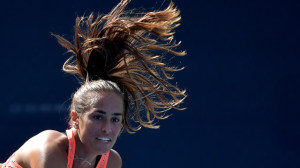 This is really just a tennis player captured in motion, but it looks like the selfish hair-dos that I usually wind-up sitting behind at the theatre!

Speaking of Chris Evert, on winning Wimbledon and walking around the court with the trophy, she said, “It’s the best feeling.”  The she paused, and added, “Of, course, having children is the next best feeling.” I love that original omission, and then realizing she had to add it!

And I totally adored that Pam Shriver honestly declared that Serena is no longer “the class of the field.”

I love a good human interest story, and we finally had one at Wimby. The Friday of the Semi-Finals was supposed to be Spaniard Roberto Bautista Agut’s bachelor party in Ibiza, but he, very shockingly, made the Semi!  He had said in his press conference two days earlier, when he won the Quarter-Final, that his friends were already in Ibiza, waiting for him.  But, obviously, he was happier to have gone further in the tourney than expected, (by anyone, including himself!)  So, there he was playing in the Semi, and they cut to his Player’s Box and…there were all the guys from his party!!!  They flew out to support him, rather than going on to party without him!  I love that!  What a happy story, all the way around. (Except for that he lost, of course. But still…)

WHAT TO EXPECT AT THIS US OPEN

More of the same! Stupid ESPN staff, the young guys just not stepping-up like they should have already done, surprises on the ladies’ side, and lots of crying, most of which will be done by me! 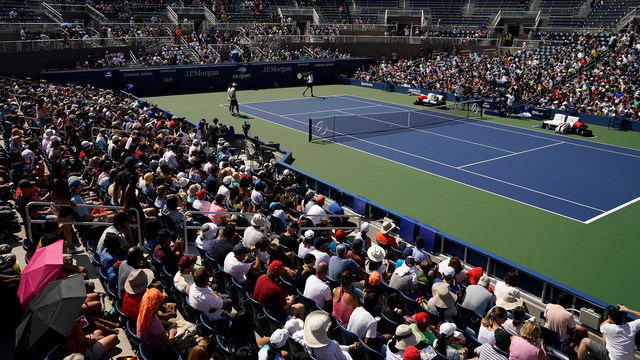 This is the crowd at the 2019 US Open to watch Roger Federer just practice!!! He is truly so loved by so many.