Trending
You are at:Home»TENNIS»TENNIS: US OPEN 2018 WRAP-UP PART I—THE SERENA WILLIAMS CONTROVERSY (WHAT ELSE IS NEW?)
By Karen Salkin on September 10, 2018 · TENNIS

US OPEN 2018 WRAP-UP PART I—THE SERENA WILLIAMS CONTROVERSY (WHAT ELSE IS NEW?)

I have so much to say about this entire tennis tournament, but Serena Williams ruined the whole thing by, as usual, making it about herself. So I have to give the topic of her offensive behavior in the Ladies Final a column all by itself. And then tomorrow I will delve into everything else about this year’s US Open. 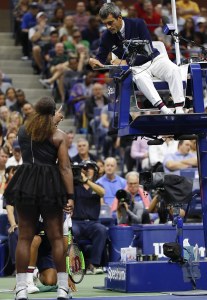 First of all, I want everyone to understand that Carlos Ramos, the chair umpire for the Ladies Championship match on Saturday, did nothing wrong. Absolutely nothing. One of my pals, who knows less than nothing about tennis, read a little about this controversy, and saw a few words on TV about it, and came to the conclusion that Serena was wronged by Carlos. That could not be further from the truth. So please, all my readers, be smart enough to see the action unfold for yourselves before you, too, perpetuate that falsehood. Or just read this to learn the truth.

In case you don’t know anything about the situation, here’s what happened, in a nutshell. Serena Williams was playing young newcomer, Japan’s Naomi Osaka, for the championship of the U.S. Open. Naomi was beating the pants off Serena, and won the first set. Then Serena’s coach was caught giving her hand signals, (which he later admitted that he did,) which is coaching, and is not allowed, so it’s considered a code violation, and the player gets a warning. Serena went nuts when she got that warning, carrying-on that she doesn’t cheat. No one said she cheated; the umpire just rightfully gave her the warning because her coach coached her from the stands. Period.

Then a few games later, when she lost that game, Serena smashed her racket to the ground, breaking it. Every player knows that that is another code violation, and a second code violation point results in the loss of a point, which happened here. Serena kept riding Carlos, and on the next crossover, she was screaming at him that he owes her an apology because she doesn’t cheat. She told him he’s a “thief” for “stealing a point” from her. And she kept not asking for an apology from him but demanding one. She was totally crazy and relentless, and it was one hundred percent verbal abuse, which is also a code violation. So, that third one resulted in a loss of a game. So when she lost that game, she went literally berserk! 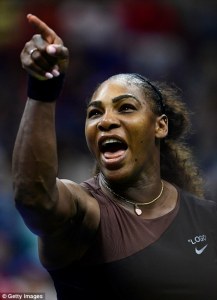 Serena Williams, at her finest.

But that’s the thing about Serena—she thinks she’s above everybody else and that she should always get special consideration. Several of my friends asked me if she turned this into a racial situation, but she couldn’t do that this time because Naomi is also black! So she said that she’s getting this treatment because she’s a woman, (as opposed to the males on tour,) which I totally predicted she would do. (And she invoked being a mom as part of it, too, saying she would never cheat because she’s a mom. She always has an excuse for everything, which I’ll tell you a little more about tomorrow.)

And then, unfortunately, some of the ESPN commentators, (who are all pro-Serena because they feel that she’s the main draw in women’s tennis in America, and therefore they have financial interests in her, so they feel that they have to kiss her butt, which is a much bigger topic for another day,) said that the umpires should make judgment calls, instead of actual calls, so that Carlos Ramos should have just given her more warnings. But the game doesn’t work like that.

As I pointed-out in a tweet right after this happened, (and one of the ESPN commentators, Jason Goodall, was smart enough to “borrow,”) when Serena’s coach said “everyone” gets secret coaching in the matches, so he did nothing wrong, the situation is analogous to speeding. Speeding is also illegal, but everyone does it, too.  But if you’re the one who gets caught, you have to pay the price! You can’t say that so-and-so didn’t get caught, so that you shouldn’t, either! When coaches do illegal coaching, and players break their rackets, and they abuse the umps, and a whole bunch of other offenses, as well, they take the chance of getting penalized. It’s all on them, not on the officials. Dot, dash, end of story!!! 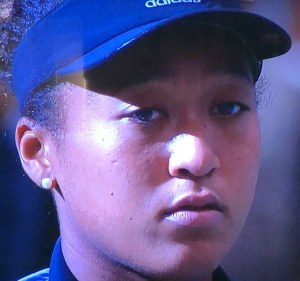 The worst part of the whole horrible story is that Serena’s obnoxious behavior ruined the experience for poor, sweet, twenty-year-old Naomi, who had just won her first Major title!!! She won it fair and square, but the Serena drama overshadowed the Championship for her. Of course. [Note: That pic at the top of this page is US Open first time Champion Naomi Osaka being consoled by her mother, who should have been happily congratulating her instead. Shame. You can see the stress on her mother’s forehead. Photo by Karen Salkin.]

So, it’s Serena who owes Naomi an apology, not Carlos owing Serena one. Serena is disgusting.

To re-cap: The ump was totally correct.  There are rules, and he followed them.  Serena did not.  And the idiots who say he shouldn’t have done that are wrong.  Should the ump not follow the rules???  That’s his job!!!  Those people are basically implying that Serena should have gotten special treatment.  If that’s so, why even have umpires anymore?  Just let it be a free-for-all. (But if Naomi had been the player to do all that, and the guy didn’t call it, these same fools would have had something to say about how unfair that was to Serena.)

I have to add that I used to have the utmost respect for USTA President, Katrina Adams, (whose reply to one of my tweets last year was special for me,) but no more. She runs the US Open, but she stuck-up for oh-so-wrong Serena Williams over her own “Gold Badge” umpire!!! (Only two dozen umps have that highest status, which means that he or she is one of the best.)  Katrina should have pointed-out that rules are not judgement calls–they’re rules! Shame on her for that.

Perhaps even worse, when she was presiding over the trophy presentation after Naomi had won, she actually stated to the crowd that this was “not the outcome we were looking for.”  Hmmm. Perhaps she really did mean that the match had this Serena controversy, but if so, that was one of the poorest choice of words ever. And now she owes Naomi an apology, as well. But you’ll never hear Naomi ask anyone for one. 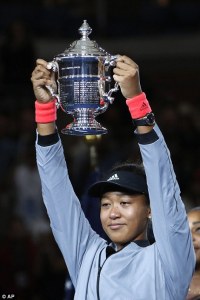 My heart goes out to Naomi for having her first Grand Slam Championship ruined for her in this manner. The poor girl could not stop crying, and shamefully, those were sad tears, not happy ones. She played a really incredible match and we all need to let her know how much she deserved that win.

The one bright spot in all of this is that at least Serena didn’t threaten to shove the ball down the ump’s throat, as she did to a lineswoman who called a foot fault on her in 2009!!! She should have never been allowed back into the US Open after that, but, of course, as usual, she received special treatment. If anyone else had pulled a stunt like that, not only would they have been banned from the entire sport, but they would have probably been arrested! So, I guess Serena is correct—she is treated differently. But definitely to her favor.

Okay, ‘nuff said. Tomorrow we’re moving on to the rest of the US Open. I just hope she doesn’t abuse me for telling the truth here!