Trending
You are at:Home»KAREN'S RANTS»TELEVISION/KAREN’S RANT: THE ONLY TWO PHONE NUMBERS YOU NEED FOR DANCING WITH THE STARS TONIGHT!
By Karen Salkin on November 18, 2013 · KAREN'S RANTS, TELEVISION

THE ONLY TWO PHONE NUMBERS YOU NEED FOR DANCING WITH THE STARS TONIGHT!

As a fan of fairness, and dance, I’m imploring all of you similarly-minded people to please vote for the only two couples who deserve to still be Dancing With The Stars tonight!

Of course, with this season’s crazy formula of judges marks and viewers votes counting on different weeks, we won’t even know if these two are still in the competition until the end of tonight’s show, but a girl can hope. 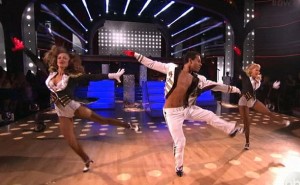 So here’s the deal: they stupidly gave the contestants the same phone numbers for the whole season, so people can call without even seeing the show. Of course, being the above mentioned fan of fairness, I would never usually do that; I have to see the performances on the evening, and judge that way. But now that it’s down to just five couples, with four making it to next week’s finale, we must do it this way because we know that two of the competing “stars” are fabulous, while the other three basically suck at dancing. So, in this case, it is fair to vote without seeing the show.

A stupidity on the part of whomever made-up the rules of the show to begin with, is that viewers can vote during the show, which means you never have to see everybody perform! They do that even on the first show of this season, when you can form at least some educated opinion of the various celebs’ dancing talent, so they should make it that you have do see the show before you can vote. (Fairness issues again.) 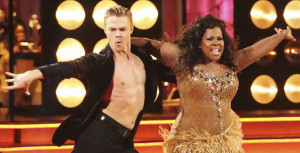 Derek Hough and Amber Riley. Just look at that intensity from both of them!

So the rules for tonight are: you can vote anywhere from 8 PM to midnight, your local time, as long as you know the correct phone numbers. And since Glee’s Amber Riley, and adorable Corbin Bleu from High School Musical are the ones who should come in first and second, I’m giving you their phone numbers to dial in those hours. I think you can vote up to ten times per phone line, and unlike several other shows, they will tell you when you’ve “reached your call-in limit.”

Here are the numbers, (which are totally free,) that I’m begging you to use tonight:

Now, fingers crossed that there are enough fair people in this country to make it work-out. And please keep these numbers handy for next Monday night, too. (Knock on wood 6that they both make it into the final.)

Whatever we all did a couple of weeks ago worked to save Sean Saves The World, so I’m hoping that it will work to save Corbin and Amber, as well.

And thanks for doing this!

[P.S. Don’t forget that the sexy Maks Chmerkovskiy will be back on the show tonight! But this time, as a judge! Finally, someone who knows what the contestants are going through! I can’t wait!]