I really didn’t want to weigh-in on the Bruce Jenner situation again.  It’s none of my business, and should be very personal to anyone going through gender dysphoria. But, people keep asking me for my thoughts, so here I am.

I’ve already weighed-in on the topic, (see the link in the next paragraph,) and my thoughts and feelings have not changed. Nor will they. 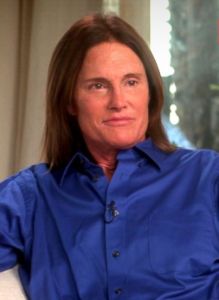 Bruce being a woman–I can see it.

This time, I’m writing about just Diane Sawyer’s ultra-weak interview itself, so, if you’d like my take (which is really pretty interesting, if I do say so myself,) on the whole topic to begin with, please click here: https://itsnotaboutme.tv/news/gossip-bruce-jenners-transition.  I just re-read it myself, and even I’m amazed that I was exactly correct on what was happening with him two decades ago! OMG! I was spot-on. It’s the exact story he told Diane in the interview!

And now, here are my thoughts on the now world famous 20/20 interview that aired last Friday night:

Diane Sawyer did a terrible job of interviewing Bruce Jenner!  There was so much more she could have asked!  They really needed me and my superior grilling techniques to get to the bottom of it all.  Hers was far from the “explosive” interview that it was promoted to be.  She barely got to the bottom of anything! A high school journalism student could have done a better job of it!

I really wanted to know what makes him a woman, rather than a cross-dresser.

How about these for queries: “Since you’re attracted to only women, when you transition, will you then be a lesbian?”; “When [your third wife] Kris saw your boobs when you were first intimate, didn’t she think something was up?”; “Did you have normal, good-feeling sex with all the wives you loved ?”; “It appears that Linda [Bruce’s second wife] knew the story while you were still married, is that correct?  So, is that why you two broke up?” (More on this one in a second.);  “Did you have any pals you shared your secret with, to make it easier for you to bear?   Or a shrink?”;   “What made you not do it those thirty years ago, when you state you first wanted to, and then just fade into the background?”; and the most important one of all–“Do you think it was fair to marry three women, and even have children with them, when you knew you were really a woman and not a man?”

Diane also never used the word “Penis,” (which I hate saying myself, so I sort-of understand; of course, like me, she could have just referred to it as “the p-word,”) and I really don’t think she even ever uttered the more adult “genitalia.” I really don’t understand how you become the other sex if you keep your original genitalia. I thought that was sort-of what defined which sex you were born, right or wrong. Diane really needed to get to the bottom of that.

I learned more of what went on (and the answers to several of my questions,) by reading ex-wife Linda Thompson’s column that was published during the week-end, than I did from Diane Sawyer’s “big interview!”  (If you’re curious, you can read Linda’s writing here: http://www.huffingtonpost.com/linda-thompson/bruce-jenner-linda-thompson_b_7080918.html.)

Unlike many, I do not feel that he did this interview for publicity.  Maybe he did, since he participated in his family’s TV show. I never saw the reality series, but I now have the feeling he just went along with it, as it seems he’s been doing with most things in his life, now that we know what he’s always been going through. Even never having met him, nor anyone in his giant fam, I’m just about positive that he did the interview because the press would hound him forever during his “transition.”  This way, it’s all out in the open; he told his story the way he wanted, so it takes away much of the torture from the media creeps.  So, good for him!  And I’m sure he really does want to help others in his situation.  Why wouldn’t he?

Why he’s going ahead with his planned docu-series is another issue. He told Diane that this was the last interview he was doing as a man, so I don’t know how the series is going to work. I guess he’s not considering it an “interview,” per se. 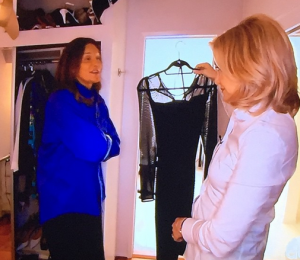 Bruce Jenner showing Diane Sawyer the first dress he’s going to wear as an official woman. I believe I wore the same one to a birthday party of mine–a dozen years ago! Trust me, it looked better on me, by a mile! (And that’s a pretty weak closet, too, especially for a rich guy! I hope that will change when he becomes a woman!)

To finish-up the topic, and hopefully be done with it, (at least for a long while,) I have no problem with Bruce Jenner, or anyone, changing his or her sex.  (Unless, bite my tongue until it bleeds, Mr. X. If he told me he was really a woman, after I had lived with him for so many years, I’d do the job for him myself!) I say live and let live, as long as no one is getting hurt. (Even though Bruce obviously did hurt at least three women. His kids should not be hurt at all, because had he not perpetuated his life-lie in the manner he did, they would not be here!!!) “Transitioning” into the opposite sex is just such a rare occurrence, (although it does appear to getting much more prevalent, and even something to sort-of flaunt,) and this the only instance of a celeb doing it, (especially one who’s known for his manliness,) that it’s hard for most of us to wrap our heads around.

I have to end with a couple of amusing statements to come out of this spectacle. Mr. X is making me tell you the first one: While watching the interview, after Bruce Jenner said he’s attracted to only women, Mr. X asked me, “ So now Bruce is going to be limited to dating only lesbians? So what’s going to happen with that?” I answered, “I don’t know how any of that works. I don’t understand it. I couldn’t even sleep with anyone with back hair so…” As amusing as Mr. X thought that was, I really can’t figure any of this out. Even though gender and sexuality are two different things, whom you have sex with is definitely connected to it! So, as much as I’m not a fan of Kris Jenner, (he said if she’d be accepting, they’d still be married,) how can you fault her for not wanting to sleep with a woman, when she married a manly man. (Although, as I said before, she knew about his breasts from the get-go! It’s all a head-scratcher.)

Oh—wait–wouldn’t it be a riot if he changed his name to Kris??? OMG! I can’t believe I didn’t think of that before!!!

And lastly, Kris Humphries, who had that famous seventy-two-day marriage to Bruce’s stepdaughter, Kim Kardashian, tweeted right after the interview: “Man, I’m glad I got out when I did.” Just hearing the newsman who was reporting on the story read that made us laugh out loud. Very funny, albeit a bit insensitive. (But not everyone has to hop on board; I feel a lot of people are faking their support to be politically correct.)

Oh, and by the way, Bruce–Good luck with your Republican leanings.  I’m sure that party will really embrace your newfound womanhood!