DANCING WITH THE STARS SEASON 28 CAST

Updates to the article below:

The premiere of DWTS pretty much went according to what I wrote oriiginally, below, with a few exceptions. They wound-up nixing Keo altogether and moved that new guy, Pasha, up to pro partnering, with Kate Flannery, (who will now most likely be the first to go.)

Some of the partners that had previously been leaked turned-out to be incorrect. So:

I’m thrilled that my fave to win, James Van Der Beek, got paired with lovely Emma Slater instead of now-matronly Peta Murgatroyd, who now dances with Lamar Odom.

All the other pairings in this article are correct.

And I forgot to mention that everyone I know still detests creepy co-host Erin Andrews.

Breaking News: Christie Brinkley broke her arm yesterday, so she’s being replaced on DWTS by…her twenty-one-year-old daughter, Sailor, who has had just one day to learn tonight’s dance! [Note: If she is, indeed, partnered with Val Chmerkovskiy, his new wife, Jenna, might not be too happy with this development. But at least Val has a much better chance of winning this season with a young, spry chick than he did with her old mother.] Or is the injury news just smoke and mirrors because Christie couldn’t hack it, and her daughter has been practicing all along? Hmmm. Show biz.

Read on for what I wrote before this update.

Well, another season of Dancing With The Stars is finally upon us, beginning tonight. The network dispensed with doing this show twice a year, so we haven’t had our ballroom dance fix since last November!!! 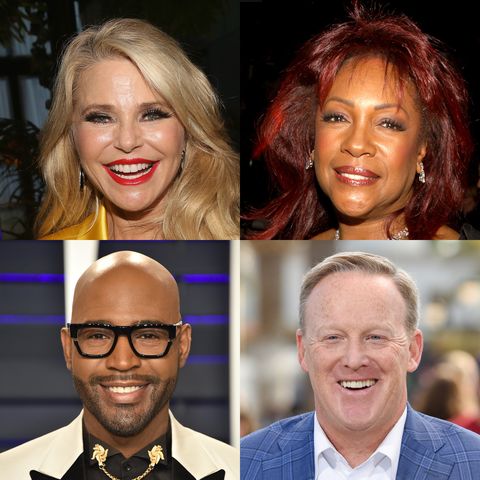 How many of these supposed “star” can you name?

But a lot of the decline in the show’s popularity is due to them never getting “stars” anymore. Actually, they’ve rarely had one on there to begin with! While this season’s roster is not exactly a sparkling one, either, at least I’ve heard of almost all of them this time. And about half of the dozen are actually somewhat famous, if not exactly really celebrities.

Before I break-down this year’s guest cast, I have to first address the major professional dancers controversy. I do feel a tad bad for Artem Chigvintsev and Sharna Burgess, who will not be on this season and are pretty upset about that diss, but the dozen chosen pros this year are part of the usual rotation. It sucks that each year there are no guarantees for these incredible professionals. The dancers are all aware of that creepy policy, but shame on the producers for not figuring-out a better way to keep the dancers on hold; they have to give-up other jobs while waiting to hear if they’re on DWTS each season, and they do not receive any type of payment at all if they wind-up not being hired for the show! That really sucks.

Perhaps the powers-that-be over there are trying to save some bucks. They did away with the auxiliary dance troupe this year, and replaced them with just one female and one male, thereby saving not only four to six salaries, but they probably give the new two a lot less money than they did the former regulars, whose salary most likely increased each season.

One more observation is that this season, out of the twelve pros, only three are single! There are two married couples, (Emma Slater and Sasha Farber, and Val Chmerkovskiy and Jenna Johnson,) and another five are married to regular people. So they paired all those unavailable folks with “celebs” who there is absolutely no chance of a flirtation with. 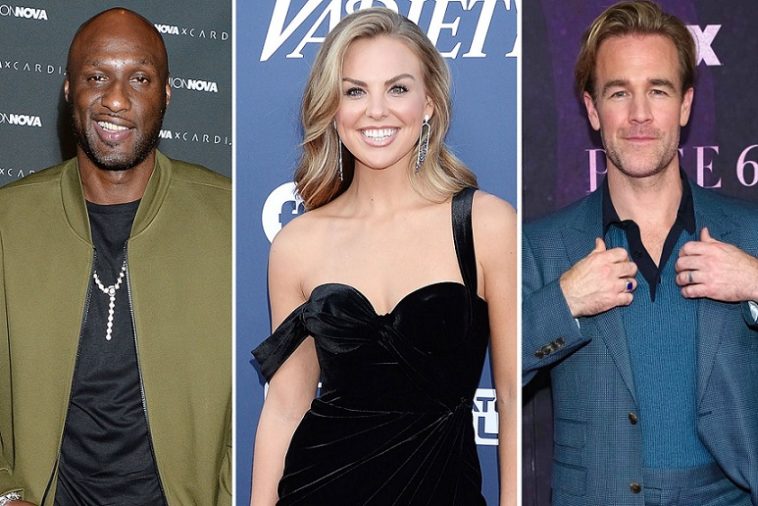 Same with these obscure peeps–how many can you name?

In the single category, Keo Motsepe is way too young for old former Supreme, Mary Wilson. And he’s an honest dude, (I’ve met him,) so there’s little to no chance of the producers making them fabricate a flirtation, either. So, the only two opportunities for the producers to manufacture a “showmance” is with pro Brandon Armstrong and his Fifth Harmony girl partner, and, more likely, recent Bachorlette Hannah Brown and Alan Bersten, who they tried to whip one up with his skinny weirdo partner last season.

And here’s a personal shocker–believe it or not, there’s one celeb on there whom I detest even more than Sean Spicer. Read on to find-out just who that is.

Okay, here are my first thoughts on the supposed “stars” and their pro pairings. [Note: These are the pairings that were announced originally about a month ago, but now the show is being coy about them, saying we’ll have to find-out by tuning-in tonight. So, if I have any wrong, I apologize in advance.]

I’m beginning with the only ones I’ll be happy to see, and go down to my bottom two:

Actor James Van Der Beek and pro partner Peta Murgatroyd—This one is a conundrum for me, because I’m a big fan of surprisingly-amusing James, but Peta, not so much. If he had been paired with the likable and shunned-this-season Sharna Burgess, I would have been rooting for them all the way. I most likely still will, though.

Country singer Lauren Alaina and pro partner Gleb Savchenko—While I don’t really care about her, I’ve always thought she was sweet since she was the runner-up on American Idol eight years ago, so I expect more of that same sunshiny-ness on this show.

Comedian Kel Mitchell and pro partner Witney Carson—I have never even seen this guy in my life, yet I’ve always felt bad for him. He started-out in show biz as the teen-age partner of Keenan Thompson, who has moved right along in his career. Keenan is not only my favorite SNL performer perhaps of all time, but he’s uber-famous all-around now, while Kel has not advanced even a tad since their young days on TV. And I love naive Witney, so I hope to really get behind this duo.

Former Supreme Mary Wilson and pro partner Keo Motsepe—I’m rooting for them a bit just because Mary got so screwed by Diana Ross and Berry Gordy back in the day.

Former NBA basketball player Lamar Odom and pro partner Emma Slater—His lunacy is sort-of entertaining; it’s a special kind of fun watching a nutty train wreck. And Emma is so sweet, so even though I don’t expect them to last too long, I might just be in their corner a tad.

Ones I don’t care about at all:

Former model Christie Brinkley and pro partner Val Chmerkovskiy—Even though she’s danced Fosse-style on Broadway (in Chicago,) I don’t see Christie as being very graceful. And I have a feeling her all-plastic-by-now face will annoy me. But I am a fan of Val, so we’ll see on this one.

Fifth Harmony singer Ally Brooke and pro partner Brandon Armstrong—I’ve never seen nor heard of this girl, but I feel for her because a couple of her former band-mates have achieved solo fame, and she’s still obscure. So this is her attempt at getting a modicum of mainstream publicity, as well.

Recent Bachorlette Hannah Brown and pro partner Alan Bersten—I’ve never seen this girl, of course, (because I’m not classless enough to watch crap like the Bachelor  franchise,) but she looks pretty enough, and Alan seems like a nice guy. So I’m willing to give them a chance.

Queer Eye guy Karamo Brown and pro partner Jenna Johnson—Again, I never watch classless crap like Queer Eye, so I have no idea who this guy is. And Jenna is never very good; she won on the shortened season after the Olympics only because she was paired with uber-popular and fabulous Olympic ice skater, Adam Rippon. So this pair could possibly be a snoozefest.  Then again, Karamo is a gay guy of color, so he has dance-skills possibilities. (Is that not politically correct to say? But it’s a compliment, so it has to get a pass, right?)

Actress Kate Flannery and pro partner Sasha Farber—I have no idea who this woman is, but from her picture, she doesn’t stand a chance. Except maybe with the pity vote. Just saying’.

Ones I can’t stand:

Political aide Sean Spicer and pro partner Lindsay Arnold—I feel bad because Mr. X adores Lindsay, but Sean has got to be the first to go. However, he’s not even my most hated one on there! That honor goes to:

NFL football player Ray Lewis and pro partner Cheryl Burke—This is the one contestant I desist so much more than Sean Spicer. Sean is just a moron, but Ray Lewis is a killer. Literally. He should be in jail, not on a dance floor. Or our TVs. (Here’s the story, if you don’t know it:  www.usatoday.com/story/sports/nfl/2013/01/10/ray-lewis-baltimore-ravens-atlanta-murder-2000/1566198.)

In addition to the the show’s changes this season that I mentioned at the top, here are some more:

I believe that the viewers have always been able to vote during the show, without having to wait till the end, which is never fair. But now they’ll show the results of that “live vote” at the end of each show. Of course, it’s far from representative of the real vote—first of all, only people on the east coast, (and others who lied when they ordered their satellite plans,) get to see the show live! So we will never know what’s really going on with the entire voting population. Staying the same, though, is that many people will be voting for just the duos they like, in general, without even seeing anyone perform, which is beyond unfair. But, I have to keep reminding myself that it’s just a stupid TV show.

The same old judges, only one of whom (Len Goodman, in the middle) knows anything about ballroom dance!

Also, for this go-round, the “judges save” will be introduced. That means that each week, that trio will decide which bottom two duo will be eliminated. That’s probably for the best. I have a feeling it’s being implemented to prevent travesties like dreadful dancer Bobby Bones being kept in the competition to be able to win like he did last year. Many of us feel his victory is the reason that DWTS was relegated to just one season this year instead of its usual double-dip.

Okay, I’m willing to give it all a chance. Check-out my tweets as the season goes along, (@MajorCelebrity,) to see if any of my thoughts have changed.