Trending
You are at:Home»DANCE»TELEVISION/DANCE: DANCING WITH THE STARS JUNIORS
By Karen Salkin on October 16, 2018 · DANCE, TELEVISION

DANCING WITH THE STARS JUNIORS

When I heard they were doing a Juniors version of Dancing With The Stars, as much as I was thrilled that I was going to see tween performer JT Church back on my television, dancing up a storm once again, I was really worried, as a former teacher, that this competition show would be way too stressful for ones so young. Heck, look at what wrecks the grown-up competitors are!!! 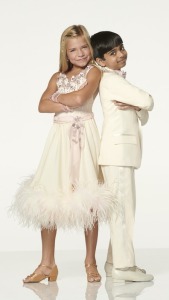 But it looks like I needn’t have been concerned. I’m sure it hurts the ones who are *eliminated, but the show seems to be doing a couple of things to help make the whole process easier on them. *(The first week, the little girl chef looked distraught, as did the little boy who was the lowest scorer this week, but Sarah Palin’s grandson just looked blank, as he had all along, when they told him he was gone at the end of the premiere episode.) [Note: Big “stars,” eh? Even I don’t know their names, and I go back and replay bits I just saw every few minutes!!!]

First of all, the show, (except for the finale, I believe,) is taped (instead of live,) so if there are any disturbing incidents, they can be edited out. And that makes for so much less pressure on these children to begin with.

Secondly, they’re not doing long drawn-out eliminations, or scaring the kids by telling them, “You’re in jeopardy!” The host just quickly states, “Going home this week is…,” or something like that. Like ripping-off a band-aid. So good on them! 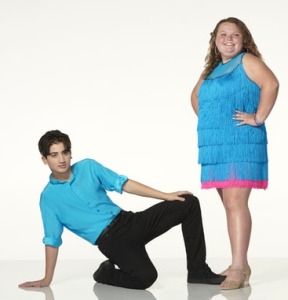 And, by the way, the correct two did get eliminated the first week. This week was a toss-up because there were about four sub-par duos. Let’s just hope it’s poor in-denial-about-her-looks* Honey Boo Boo who gets the next hook! She doesn’t dance; she just stands around shimmying. *[Note: I do feel for Honey Boo Boo because I was in her shoes once. I was pretty hefty myself when I was ten, but when I saw the pictures my father took of me back then, I just thought that he was a bad photographer! I could not accept that I really looked that awful.]

As for the entertainment value of Dancing With The Stars Juniors, most of the kids are adorable! I love the little dancer girl who just can not stop squishing her partner, the little spelling bee boy. So adorbs!!! And most of them are pretty entertaining, one way or another. 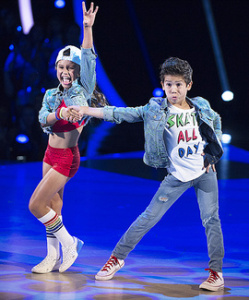 Of course, hands down, my favorite duo is JT and his “celeb” partner, skateboarder Sky Brown. (But why does she sound Australian when she said she’s from Japan???) I’m rooting for those two all the way. (They were waaaay under-marked on Week 2, which was a semi-disgrace! But they went shortly after a much older pair, who received “8”s when they should have received “9”s. So the judges left themselves nowhere to go except “7”s for everyone else. Shame.)

But that’s an issue with Dancing With The Stars Juniors not being live—we, the viewing audience, do not get to vote!!! That leaves it all up to a combo of the judges marks and the studio audience vote. I just hope that every kid is allowed an equal number of guests; otherwise, the voting can be really skewed. And you know that if it was up to me, (which, of course, it should be!,) JT and Sky would win.

My other two fave teams are Miles Brown, (the kid from Black-ish, who is the one real “star” on there,) and his girl, and the little spelling bee guy and his squishing-him partner. 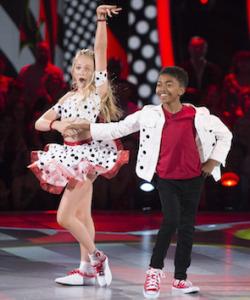 Miles Brown and his cute partner, who is the little sis of Mr. X’s favorite grown-up pro, Lindsay Arnold.

Which brings me to the trio of bones I have to pick with the powers-that-be over there. One is that no one except the aforementioned Miles Brown is even close to being a star!!! (And, in reality, he’s the most pro dancer on there! He’s Baby Boogaloo, who’s been dancing professionally since he was about four-years-old!!!) Three of the twelve are even just children of famous people!!! This show is just contributing to the future obnoxiousness of those already over-entitled offspring! (And it’s equally egregious that some of them said stuff like, “I’m a clothing designer.” Yeah, right—you’re a kid, not a designer!!!)

And how rude is it of the producers to not tell us the last names of the mini pros?!?! No one knows who they are, yet they’re being announced with only their first names, to make them seem lesser than the supposed “stars!” 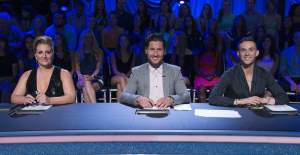 And lastly, when those said pros were introducing themselves on the first episode, and they said things like, “You may know me from Justin Timberlake’s video,” or “…from So You Think You Can Dance,” would it have killed the producers to show a five-second clip of what they’re referencing??? Ridiculous. 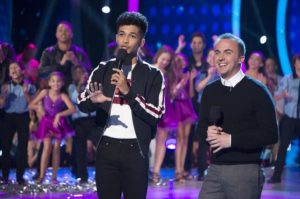 But, to end with a positive, I’m thrilled with the hosts, (Jordan Fisher and Frankie Munoz,) and the judging panel: adorable pro dancer Val Chmerkovskiy, hilarious ice skater (and last seasons’s Champion) Adam Rippon, and choreographer Mandy Moore, who owes her first born to the make-up artists on that show! They’re all acting very appropriately in dealing with children, but still making it a competition, and are a winning combination! (I almost did a spit-take when Adam gave Honey Boo Boo a much better mark than she deserved, and explained it with simply the words, “wind machine.” Mr. X and I love that boy!!!)

To sum up, if they do this again next season, (which I really hope they do,) this show needs a lot of tweaking. (Perhaps they need to hire yours truly as a consultant. Actually, as the consultant!)

And more importantly—Go, JT and Sky!!!