Trending
You are at:Home»TELEVISION»TELEVISION: TV COMPETITION SHOWS WRAP-UP
By Karen Salkin on May 27, 2011 · TELEVISION

I still absolutely hate this Mac computer that Mr. X got while I was away, but since I’m writer, I have to force myself to write on this horrible machine. On top of that, I’m still in the throes of a wicked cold I got from a rude woman who kept coughing and shnurgling on me on the plane home from New York last week-end, so I’m in a heavy-duty cold medicine stupor. And you don’t even want to know what I look like right now!!!

So, my observations on the season finales of three of my favorite TV shows may not be as sharp as usual, and I hope you’ll all forgive me for that this time. 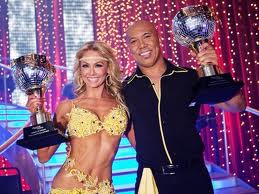 I’m okay with Hines Ward winning, but Chelsea Kane was robbed. She was by far the best dancer. Her third place finish was most likely due to no one having heard of her before, (yet another example that this show should not have the word “stars” in its title,) and fans disliking her pro partner, Mark Ballas. I can’t say I disagree with much of the criticism of him that I’ve read. But that shouldn’t reflect on her.

Most robbed of all were Ralph Macchio and his partner, Karina Smirnoff. They should have finished first or second, but the judges totally under-scored him in the semi-finals to make sure that the creepy Kirstie Alley would make it to the finals. And they also added that stupid “winner takes all” cha-cha in the semis so that they could boost Chelsea over Ralph, as well. (Chelsea is a Disney actress and Disney owns ABC, the network that DWTS is on. ‘Nuf said.) They chose the cha-cha because they knew it was the only dance Ralph hadn’t really done as a solo all season. (He had done a shorter version of it in the team dance a few weeks before.)

I really don’t know what their problem with him was, but it was blatant. And not only was Ralph better than Kirstie, so was Romeo, Chris Jericho, and Petra Nemcova, who all got eliminated before she did! She must have a development deal with ABC. Mark my words on this one!

I would have loved to see Kirstie and Ralph in the finals, though, just to watch how Maks ignores his former fiancee, Karina, on all the press they would have had to do together. That actually might be why the judges did what they did—they wanted to make sure it didn’t come to that, and they chose their allegiance to Maks over Karina, who wasn’t even supposed to be on the show this season until they booked Ralph at the last minute. I’m seriously just figuring this out as I write!!!

Anyway, back to Hines. I’m happy for his partner, Kym Johnson, who valiantly competed after that awful limb-threatening accident she had. He was good, but really far from the “all that” that the judges made him out to be.

And, as much as I have a semi-crush on Maks, he did act like a baby when he didn’t win. He got so screwed last season by missing-out on the finals with Brandy because of idiots voting for the non-talented Palin girl, that I think he just got his hopes up too much with Kirstie this one. I feel bad for him, but I’m absolutely thrilled that I no longer have to listen to his partner Kirstie’s squeaky forced laugh anymore, nor have my eyes assaulted by her filthy hair and talon-like nails. 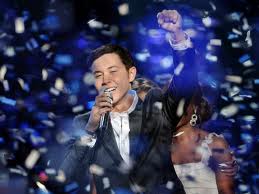 This victor is one I’m thrilled with! Scotty McCreery. Yay! He wasn’t my original choice, (that was Casey or Paul,) but he’s always made me smile, if not laugh (in a good way,) when he performs. He’s just so genuine. And he seems like the perfect kid. I’ve really been slowly brought to fanhood over the season.

I think so has Lauren Alaina, his rival for the title. I think that’s why she appeared to be such a good sport about losing to Scotty. I think she was happy for her possible man to be the more powerful one. And this time, I expect them both to be big country stars, unlike many previous seasons on this show, when we all knew that we’d never hear from the runners-up again. (Nor some of the winners even!)

The finale show itself was a tad disappointing, though. Where was the duet from the two finalists? That’s always my favorite part. I can still see Clay and Ruben walking-out singing Ain’t No Stopping Us Now, and Taylor Hicks and Katherine McPhee dancing around, all dressed-up. Did the show use up all the Scotty-Lauren duets during the season? It would have been something to see them do one last one together knowing that this was it for their American Idol journey. Very disappointing.

No, instead they chose to make deals with both Lady Gaga and Beyonce that they could debut their new ditties in front of television’s biggest audience in exchange for one mentoring session in the past two weeks. (I don’t know that for a fact, but you don’t have to be a genius to figure that one out.) Yes, Lauren was saving her voice, but they didn’t know that would be the situation when they planned the finale. And this was the end—what did she have to save it for? How would just one more song have hurt?

The whole finale was just a mush. Ryan looked like a creepy little old man in his weird tux, (I guess he is planning on taking over for Dick Clark,) most of the action took place in the uncomfortable audience (the Nokia has the worst seating of any theatre I’ve ever been in in any city,) rather than on the stage (to set-up for the totally unnecessary numbers I just mentioned,) and there was just not much fun to the whole shebang, except for Casey Abrams and Jack Black, the surprise of which pairing was ruined for me the one time I watched even a little part of Ellen this year. (And that was only because Casey was on it.)

I’m still waiting for them to begin MEDIUM LOSER, so I can go on that show! Since I hurt my back over a year ago, and didn’t walk for three months, I gained about thirty pounds and would love some serious help to get them off. But I still can’t exercise, so that could be a problem. But, since this E-zine is titled “It’s Not About Me,” I’ll move on to the real show’s finale. 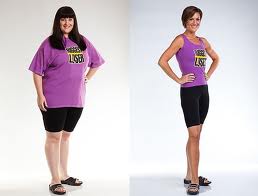 Biggest Loser winner Olivia Ward, before and after.

I was fine with Olivia winning. I loved that it was an all-girl final, and that sisters were two of the three. And, they were correct—I don’t think anyone watching expected that duo to make it to the end, let alone come in first and second for the whole season.

The only thing I felt bad about is that the little girl, Irene, was the “biggest loser” on “the ranch” for the entire season, and those last few weeks at home cost her the title. And a quarter of a million bucks! That part is still bothering me.

But aside from that, I was satisfied with the outcome and the season as a whole. But, it was a little weird that they never mentioned Rulon Gardner at the finale. He’s the Olympic champion wrestler, the one they made the biggest fuss over this season,and never mentioned again after he mysteriously announced that he was leaving the show about five or six weeks ago.

And then he showed up as judge on some food show, and until this morning, I couldn’t even find out anything about the whole mess. [Note: I suggest you Google his creepy comments today. And, if you know any other details, please feel free to share them in the Comments below.] I think he was basically a douchebag who got some other offer, and should then have “thrown the weigh-in,” like everyone else does who wants to go home. That way, someone else would have been spared elimination that week. He was just way too selfish and into himself. I used to be a fan of his athletics, but I’m pretty sure I’ll always root against him now. He probably just did it that way so that no one on the show can say that they beat him.

He now claims that he was there soley to lose weight, and not play games or win money. He owns a gym in Utah—he should have just hired his own trainer and not taken up a spot that some non-famous, non-wealthy obese person could have benefitted from. What a dirtbag!

So, just when I thought it was safe to go out at night again, and not have to be glued to the TV so that no one would tell me results, and also so that I could vote and help the contestants where applicable, here comes the new season of So You Think You Can Dance and America’s Got Talent, and some new weight-losing show. (At least that one’s not a competiton. I don’t think.) So, it looks like I will, after all, be TV-obsessed throughout the summer. Darn.

And I want to wish you all a wonderful, and most of all safe, Memorial Day week-end.  I’ll be safe all right–ensconced in my bed with a bottle of cough syrup and a spitoon.