Trending
You are at:Home»TELEVISION»TELEVISION: SO YOU THINK YOU CAN DANCE–WEEK 2
By Karen Salkin on June 25, 2010 · TELEVISION

SO YOU THINK YOU CAN DANCE–WEEK 2

I wasn’t going to post today because I’m so involved in Wimbledon that I seriously don’t have time for anything else, including sleep. I watch every point, and all the excitement of this first week has been mind-boggling. (More about it on Monday.)

But there are few points about this season of So You Think You Can Dance that I must address. (Yes–even more than I did in last week’s SYTYCD column!) So, this will be short. 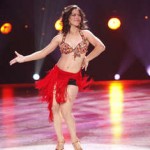 Cristina Santana, who should NOT have been eliminated last night! Oops--I cut her feet off here, just like the director does when the contestants are dancing!

First of all, they sent the wrong girl home last week, (Alexie Agdeppa,) and then again last night, with the dismissal of the sweet and talented Cristina Santana over the awful and full-of-herself-while-still-being-so-insecure tap dancer, Melinda. It was a travesty! It’s the first time I’ve ever agreed with top judge Nigel on how unlikable she is, and that she must go.

Now I’m afraid that they’ll have to keep her for a few more weeks, no matter how many times she’s in the bottom three, because they’re down to only three girls and still all six guys. I knew this would happen.

I was actually getting behind this new system of single contestants competing without another contestant as partner because that way one wouldn’t drag the other down. And I knew that this was the way to make it fair in the gender category; in most of the preceding season, all the boys were the best, but the rules made it mandatory to have equal numbers of both sexes in the finals.

But I thought that, by starting out with half the contestants as usual, (Top 11, as opposed to the usual 20,) we voting audience members would hold the key to just who goes home each week, and it would no longer be in the judges’ hands for the first half of the run. But it’s still up to them and I’m sure that they don’t want all the girls to go home before any one of the boys does. This way, they still control that.

So, Mr. X and I were shocked, and very pleased, when they kept Robert last night, the first boy in the Bottom 3. But what is wrong with Mia Michaels and Adam Shankman? How could they have chosen to keep Melinda over Cristina? She’s not even very good in her own genre of tap!!! And, in all the other styles, she’s super-weak. There’s never any tension in her arms, hands, shoulders, back, and neck–the good kind of tension I mean, the kind that you need as a dancer. (As a former dancer, though, admittedly, not even close to as good as these people, I’m always aware of things like this; it’s the difference of just sticking your arm out to the side, and doing it with tension in your muscles. Try it and you’ll see what I mean.) Her feet are really lazy and often in the wrong place, and she never gives it her all, though I don’t think there’s that much to give, in her case.

As the elimination show began last night, Mr. X and I both said that Melinda should be the one to go. I said, “not only should she be voted off the show, she should be slapped on her way out!” He loved that line and said that I should add a category to this site called “If I Were A Bitch.” Great idea, but I had to ask him what he meant by “if.” Has he not met me??? (BTW–He said of Christina’s loss: “The voters must not have liked braces.” And I’m the mean one?)

To continue in that vein, will one of the make-up people please whiten Billy’s teeth already??? He’s a fabulous dancer, and a really nice guy, you can tell, but he smiles a lot and they do a bunch of close-ups on him, and those teeth are just so yellow! Especially if he stands next to Adechike, whose smile is like a lighthouse beacon!

Speaking of Adechike, can they please get off his case for not smiling while dancing serious pieces? They’re just trying to find something to criticize because all the boys’ dancing is so excellent. Especially that of the truly amazing Alex Wong, who they told to study tapes of Bob Fosse…dancing! Even though he did have gigs when he was young, he’s famous for his choreographing technique, NOT his dancing ability. And Alex said he did study it when he found-out what he would be dancing. Do the judges not watch their own show’s video packages? Even though the inane host always tells us to “take a look at this?”

And Alex’s routine wasn’t choreographed by the many-years-deceased Fosse–it was done by Tyce Diorio, who said he was making it in the style of Bob Fosse. Oysh. To it all!

None of this really matters because I’m just about positive it will come down to Alex and Kent, with Kent winning. (He was great in that bondage piece, btw, despite what the judges had to say.)

But, to be fair, I am lauding the show for taking much of my advice. (MR. X said that they had to have read my column last week about the show because they fixed a lot of the problems I listed.)

Though it’s still far from good, the camera work has improved. At least they’re not doing round-the-worlds while the contestants are performing, even though they do keep cutting off their feet, and doing way too many cuts, including showing too much of the helper dancers, rather than every second of the competing ones.

I’m now on board with the use of the All-Stars, too, because we can just concentrate on the one dancer who’s new to us this year. Last week, I wrote: “And then, the poor kid has to stand there and face the judges alone, without a partner to lean on.” And now, they’ve corrected that, which is such an improvement! The new ones have someone to hold on to and share the experience with, and in the case of some of the critiques this week, someone to stick-up for them, as Anya and Courtney did. (Good for those girls, btw.)

Last week, I also wrote: “The one bad feature of the show that never changes is that the judges just won’t criticize the choreography, no matter how weak it is. The judges and choreographers are all associates of the show and each other, so instead, they tell the poor kids that they should have come up with the parts they weren’t given, and other baloney like that!” So this week, they did! Yay! It still wasn’t done correctly, but at least it’s a step in the right direction. (Nigel told Travis Wall that his routine wasn’t really “jazz.” That was just weird of him, especially because some genres aren’t very defined; for example, what they call “krump” really isn’t krump, pre se. It’s “krump-style.”)

Okay, that’s it for this week. Let’s keep our fingers crossed that Melinda, the weakest link, goes home next week, and that the judges and host do better jobs.

Oh, btw–did I say this column would be “short?” I must have meant “short-style.”