Trending
You are at:Home»TELEVISION»TELEVISION: SEASON WRAP-UP
By Karen Salkin on May 27, 2010 · TELEVISION

For those of you who question why I can’t talk on the phone anymore, or even answer most of my emails, just check-out all of these shows that I watch every second of (usually twice, to make sure I’m writing the correct opinions.) And this is not including sit-coms and sports! And the gorgeous Mentalist!

Okay, so Idol ended about an hour ago, and I’ve already pretty much forgotten about this entire season. I remember sitting here a year ago, hysterically crying that Adam Lambert didn’t win, receiving a million phone calls from people asking how that happened! This year, I don’t even know anyone else who was watching!

The most exciting part of the finale was seeing a guy who we all know almost died a week ago, singing and strumming. I didn’t even know who Bret Michaels was until he got hit in the head with some too-quickly-closing scenery on last year’s Tony awards, and now I cried my guts out that he was alive! Strange. (We loved Mike Lynch’s duet with Michael MacDonald, too.) 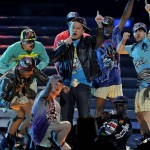 Willima Hung in the center, Larry Platt on the floor, and dancers.

But the appearance that made Mr. X and me both jump out of our seats, literally, was that of William Hung, chiming in on a very odd performance of the basically two-line “song,” Pants On The Ground. OMG to that one.

I can’t even muster-up enthusiasm to complain that one of the dullest duds ever just won, especially since his singing is usually just a step above brutal. I felt like the guys in Chicago (the group, not the city, though maybe them, as well) were rolling their eyes at Lee’s performance of their classics. And, he has zero personality, doesn’t seem too smart, and his head is as big as his body. Mr. X and I still don’t get why he was even in the Top 24! I know some people like supposedly shy guys, but I really think that what many take as shyness is really a lack of anything to say. I really think the cartoon balloon over his head would be blank.

Crystal Bowersox so deserved the win, but I really think she’s okay with it. She was being very motherly to Lee, who barely even acknowledged that she was standing beside him, being in the same boat. All season long, Simon repeatedly announced what a nice guy Lee is, so perhaps he is, but you could never tell it from his TV appearances. And, does he know any words other than “amazing?” It’s actually amazing how much he uses that one!

On another note, I am sorry to see Simon go. He’s usually the only reason to watch the show. I was actually semi-happy to see Paula arrive on stage for the finale, until she tried her hand at over-written humor delivered so badly. Mr. X said she better not try for an acting career now. She was so not funny that you could hear the audience members’ mouths hanging open as she waited for chuckles that never came. Oysh. (It was actually sort-of like the recent Fox-doctored speech of Obama’s, where the network cut out the audience laughter. Only Paula’s speech was live.)

I don’t have much more to say on the topic, except for that it was nice and interesting to see so many past contestants on the stage. I kept hoping for Adam, but I’m assuming he had other commitments; I don’t think he would have missed Simon’s last night otherwise. (Or the producers just didn’t want him there because his presence alone, before he even opened his mouth to sing, would over-shadow all the rest by a million miles.)

Also, I keep thinking that they’ll get the negative-but-without-charm David Foster to replace Simon next year, but it seems that I’m the only one who thinks that. I hope that they do get Harry Connick, Jr. because he’s funny and knows of what he speaks. If it’s Jamie Foxx, I’m done with the show.

Like Simon Cowell and Ricky Minor are. BTW–nice send-off for the latter, eh? He’s been the bandleader for all this time, and is now leaving to fill that position on Jay Leno’s show, and not one mention of him in the entire 2-hour finale. Classy. Not!

Salkin, Out! (On this topic, anyway.)

Yay to a fair outcome!!! Nicole Scherzinger totally deserved to win this season’s Dancing With The Stars, so most of us who know dance are thrilled that she did. I’ve read some of the really not too bright comments on a couple of message boards, so I’m addressing a few of those issues here, with a sprinkling of my own topics.

People keep saying that it wasn’t fair that Nicole won because she had dance experience. First of all, not ballroom dance, with it’s crazy very specific rules, and secondly, she doesn’t do partner dances of any type!

Also, when Kristi Yamaguchi was on this show, everyone said it wasn’t fair because she’s a skater, which meant years of dance training. Now, they say that Evan should have won because he is a skater! (As opposed to a dancer.) So, which is it??? I think that people just want to complain. (And Erin studied ballet her whole life and was even on point, so that’s probably even more dance training than Nicole has.)

I do agree, though, that the varying levels of competence wouldn’t be fair in the scheme of real dance competitions, but this is definitely not that!!! It’s a TV show and those are their rules!!!

Another complaint is that Derek Hough gets all the good partners. That’s not true, either. He’s had several bad partners, (do viewers not remember Elizabeth Shannon and Jenny Garth?) and he does well with them anyway because a)he’s an unbelievable choreographer and teacher, b)he gets along with them all and doesn’t create drama, false or real, and c)people vote on the professional partners as well as the supposed celebs, and Derek’s one of the most popular pros. I’ve met him and he’s adorable, bright, interesting, and full of life rather than of himself!

And he and Nicole should have gotten even higher scores in their free-style dance. Okay, they had a bobble on their big lift, but the whole dance would have started from a higher base score than the others, if this was indeed “fair” all the way round. And speaking of not fair, the other two pros brought in outside choreographers for their free-styles!!! How is that fair???

Derek and Nicole also got screwed the week before on their “era” dance. (The one where they picked a decade out of a bowl and had to create their dance in the style of that era.) They actually received all 10s, but Maks should have gotten at least one point taken off his for not even attempting to conform to his era at all! He even told us that’s what he was doing. He said the costumes and music will reflect his era, but not the choreography! What’s the point then?! Derek almost gave himself a brain hernia trying to come up with a ‘50s paso doble! And it turned-out to be brilliant, even moreso than his usual numbers.

I do think the producers created those final two dances, the ones that the public couldn’t vote on, to have the judges be able to correct the possible wrongs of the public, including: people who know nothing about dance, the ones who vote just to screw up the results on purpose (like different nerd-run websites suggest,) and all the negative females who are sitting at home being jealous of Nicole. She’s a perfect female: good-looking, great body, talented, and nice. (And she didn’t try to make a fake romance with Derek, like so many of them do.)

Speaking of possible romances, fake or otherwise, Maks said his and Erin’s bed-centric free-style was the story of them–so does that mean he admits they slept together? It’s no biggie if they did–he’s had flings with previous partners, and he’s trying to mend his broken heart over Karina Smirnoff leaving him last year. Those two were perfect together, and if he is seeing Erin, which I still find hard to believe, (even though she refers to him as “my man”–gag me with a spoon,) it appears to be a rebound relationship. But different strokes for different folks, so who really cares, either way. And I always want everyone to find happiness, whether I can understand the connection or not. But with Erin’s horrible voice, which as a broadcaster she really needs to work on, if that dance was a true depiction of what’s going on with them, he must wear earplugs to bed.

Sidebar: I just read that Erin said, “I am one of the best at what I do…” meaning, at sideline reporting. She obviously doesn’t watch a lot of other sports because she’s actually just about the worst. And, either way, it’s lovely of her to say so. Talk about being full of yourself! Ugh.

Here’s a DWTS question from me: How did Kate Gosselin get any fame??? Because she birthed multiple kids??? She has no talent, is not bright or witty or fun or nice and only moderately okay-looking. And has a weird, heavy voice, with actually nothing to say. She appears to not get life in general. So, how does she now have two shows??? For all you fairness-seekers, how about ponder that one for awhile.

As I wrote in a previous column, I wish someone would invent Medium Loser, so I can go on it! Last summer, I spent an evening with some talent coordinators around town, and they asked if there’s some show I’d like to do, to get my television career back on track, now that I had ended my long run with Karen’s Restaurant Revue. Without hesitation, I answered Celebrity Fit Club! I’ve actually never seen it, but I knew that I couldn’t get back to my most-of-my-life skinniness without a trainer. They scoffed, but I was adamant.

But, as my site states, It’s Not About Me, so let’s move on to this season’s finale of real Biggest Loser. I would have been satisfied with any of the three finalists winning. I was so happy that America voted to keep Daris in there, and leave Koli off. If not, Koli would have beaten Michael, by about 3%! And he was just too obnoxious. Though, in the interest of fairness, it’s good that he won the home game.

I always applaud major achievements, and to all of the contestants, I give a true standing O. I love a show that is truly helping people, not just being an entertainment. Great job, all the way around.

I don’t have lots to say on this except that I’m glad they kept Jack alive. I was so fearful that they’d kill him, just for drama’s sake. But then I realized that this way, they preserve their movie options. Silly me to have not realized that from day 1. Well, Day 8, anyway.

Now that I’ve had a few days to ponder the Lost finale, and read everything’s theories, I must admit that I don’t understand it any more than I did upon viewing it. And it’s hurting my head. There are more holes in the whole show than in my fishnet stockings, and I think the latter are more entertaining. (When used properly, anyway.)

I need the producers to come out and explain every single thing, but I’m not holding my breath. Oh, wait–here’s an idea that just popped into my head–that could be an alternate ending–the whole six seasons is what occurred while Jack was holding his breath and almost blacking out!!! Now, that I could understand.

That’s it for TV for awhile…until I start critiquing So You Think You Can Dance!