Trending
You are at:Home»TELEVISION»TELEVISION: DANCING WITH THE STARS–SEASON 22
By Karen Salkin on March 28, 2016 · TELEVISION

I haven’t weighed-in yet on this new season of Dancing With the Stars because, as I tweeted while I was watching the premiere, it’s more like Dancing With the Who-Are-Theys.  For reals.  There’s hardly anyone on there who doesn’t need a clarification next to his or her name to let us know what they do! Seriously, out of the dozen, only Geraldo Rivera is a known name! Wow. I hadn’t even realized that until I had to look them all up just now to see who they are! This is a new low for the show. 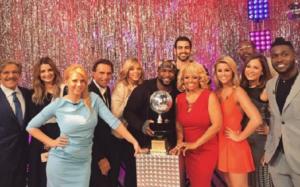 This season’s contestants. How many do you recognize? I’m betting just one or two, tops.

And, as the first season since the first three without a Hough, the premiere was a little extra boring.  No Maksim Chmerkovskiy, either!  How will I get through the season without either Maks or Derek to look at?!  Why couldn’t the guy who’s not there anymore be nauseating, dirty-haired, bad-attituded Mark Ballas?!

(As the first episode was going on, I remarked to Mr. X, “Last year with Derek and Bindi Irwin was the highest of the highs for this show. Now this season is like ‘ker-plunk.’ ”)

I’m not going to waste my time discussing the contestants individually this time.  I’m going to simply share the few thoughts that I had during the show.

At first, I was thrilled to have Head Judge Len Goodman back on the panel.  Bruno and Carrie Anne know nothing about ballroom dancing, except for what Len taught them to begin with.  Which brings me to—the producers have to decide if this is still a ballroom dancing competition, or just an “anything goes” one.  They’ve really loosened up the original concept in the last few seasons.

And why would they give some of the contestants the quickstep and the jive for their debut dance?!  Those are the two hardest dances, by far!  I can only assume they feel they need to do something to capture the waning audience’s attention, but here’s a novel idea–how about book “stars” on the show, as the title states these strangers are?! 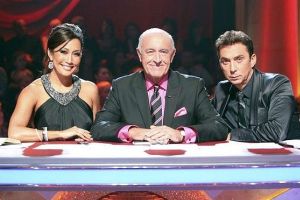 The original judging panel is back.

Okay, that last paragraph was a digression.  Let’s get back to Len. I was disgusted by how rude he was to poor Mischa Barton!  And not just because The OC is my favorite show of all time!  (She had nothing to do with that feeling, by the way.  It was all about Ryan and Seth!)  It’s because there’s no need to embarrass anyone in this forum.  This isn’t school.  Nor his family.  She’s a public figure who’s trying to resurrect her career (and life) by doing this high-profile fluff, and for him to talk to her like that was shocking and downright uncalled for.  I was embarrassed in my own home.

I was impressed with how gracious Mischa was about that horrible treatment.  How she didn’t either break down right then and there and cry, or sass him back, I have no idea.  She had to have been devastated.

[Note: Perhaps Len knew something that we, the audience, did not, and that’s why he acted that way, as he had done many moons ago with Master P, who didn’t give dancing even one percent of an effort. Maybe Len had some secret info about Mischa not working hard, and he reacted to it. I have no idea if that is correct, but at least it would explain his otherwise-inexcusable behavior towards her.]

Even though Mischa was not the one in the bottom spot when all was said and done, (it was Geraldo, who should be the one going home tonight,) I don’t think she has much of a fan base these days, so I’m afraid that she’ll be the first one eliminated.  And then host Tom Bergeron will say it’s because the pretty girls always get voted off first. (That’s not true, but he says it when they are, to make them feel better.)

Speaking of Geraldo, his partner, the lovely and popular Edyta Sliwinska, just came back to the show for the first time in years,  and I’d hate for her to do just two dances after all these years. But I don’t want the eliminated one to be either Mischa or the second-from-the-bottom Doug Flutie. And Geraldo was the worst, by far. He just walked, or stood in place and moved his arms! So, he deserves to go! 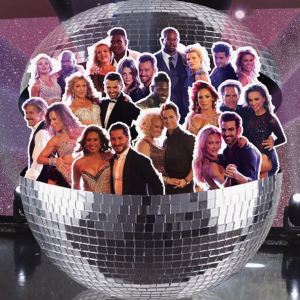 Here’s some more weirdness–why do they have three football players (Von Miller, Antonio Brown, and retired Doug Flutie,) on at the same time?  That’s just bizarre.  They don’t have any two others in the same category of fame, and they rarely ever do! So why footballers, and why now?

They also made some odd pairings–too many height and age differences for my taste.

If ever I was on there, (which is not going to ever happen, of course; maybe when I was doing my show, and was really young and skinny, they’d include me along with the others whom nobody knows, but not now; unless they sink so low as to have editors of on-line magazines on there!,) I’d have to have it in my contract that I’d get a non-sweaty dude as my partner. When I was in sixth grade, and my class had to perform at a dance festival, I made my partner wipe his hands on his pants before every rehearsal. (Nice of me, right? And he still brought me a bag of little gifts every day! Ever the femme fatale.) I cannot imagine having to hug and kiss the males on this show who are schvitzing all over the place! Yuck!

To me, there’s no clear-cut winner this year, as there were with Bindi Irwin last season and Alfonso Ribeiro two before that one.

So far, I’m rooting for Wanya Morris (of Boyz II Men fame,) Antonio, and Von.  (And no–it’s not because, like some others may be doing, I’m trying to make-up for the Oscars in one fell swoop. They’re just the best dancers, and most entertaining peeps, in general.)

I also agree with Mr. X about one of his choices, Nyle DiMarco.  We, along with most of the rest of America, had never heard of him before.  But besides that it’s amazing that a deaf person can dance so well, he seems like such a happy, grateful guy that you can’t help but root for him.  I wouldn’t mind if he wins because I so admire his pro partner, Sharna Burgess, who does great with her charges always.  I’d be happy for her to get the win.

And the female contestants this season did nothing for me. (I actually can’t even remember any of them, outside of the wrongly-berated Mischa, as I write this!)

So, there you have it! Even though it’s basically a snoozefest this season, I’ll be watching tonight, along with the rest of you who also just can’t help yourselves. [Note: This is where I usually write “Go, [someone.]” But, perhaps for the first time ever, I have no one to cheer on this year! Shame on the producers for doing that to me!]