Trending
You are at:Home»TELEVISION»TELEVISION: DANCING WITH THE STARS SEASON 11 FINALE
By Karen Salkin on November 23, 2010 · TELEVISION

DANCING WITH THE STARS SEASON 11 FINALE

Okay, so now that the shock of Brandy and Maks not making it to the final has kind-of worn-off, and turned into lingering anger, the actual dance finale finally happened last night. And, if the no-talent-or-personality Bristol Palin wins, the show will have lost any credibility it has left.

Why do these contestants even have to dance since all this show really is is a popularity contest? And actually not even voted on by the “popular kids?” It’s become sort-of Revenge Of The Nerds for people who weren’t even really celebrities, for the most part, until this show made them into such! Outside of a few stalwart normal viewers who feel they have to vote to have the right to complain about the outcome, (like I do,) I feel that it’s mainly nerds with agendas who vote.

Those rotten websites that urge their readers to vote for the absolutely worst contestant on all these so-called “talent” shows, just to mess-up the results, are despicable. Do you think any of those followers are normal people? No–nerds out for revenge for the way their sad lives have turned-out. Why else would they bother to spend their time hurting others? That’s just sick, if you ask me, which you are by reading this column.

I’ve warned people all season that Bristol could win because of who votes for her; in addition to those loser sites, she has all of Alaska, the residents of which are probably thrilled to have this to do, Republicans, (which, speaking of nerds,…,) and the righteous Middle Americans who still feel, after eleven seasons of this venerable show, that the winner has to be a person with no dance training whatsoever. Ugh to all of it. 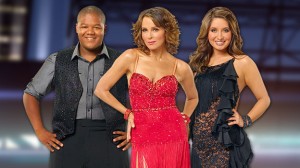 Now, praying for a fair outcome, it’s come down to the cry-baby-but-fabulous-for-her-age Jennifer Gray, dancing with adorable two-time champ Derek Hough, against charming, good-natured, hard-working Kyle Massey, partnered with the dancer-with-the-best-attitude, Lacey Schwimmer, whose last name the show’s announcer still can’t pronounce. Both deserve that mirror ball trophy and either could really win. As long as the aforementioned demons don’t make the Palin girl the winner.

[Sidebar: she seems like a sweet girl to me, so I have no problem with her personally. But she’s like a robot with a bit of dance ability, totally devoid of personality or smarts. I just resent that she has nothing to recommend that she should have gotten this far, and that the people who vote for her have no basis to do so, except for non-admirable agendas.]

One more word on Brandy’s too-early elimination: The few words my mother had to say on the subject summed it up best: Mom: “I didn’t like her.” Me: “You didn’t?” Mom: “She’s a good dancer, but I didn’t like her.” Maks tried his hardest, and Brandy’s an excellent dancer, but her way-too-intense attitude just turned people off. (And BTW–I give Maks props for speaking his mind, unlike others who condemn him for it. You go, boy.)

So, back to the show last night. I’m keeping my fingers crossed for Kyle. He came in young, with a fan base of just little kids and teens who don’t vote, and has been upbeat and pleasant throughout. He’s a pleasure to watch and listen to. And I’d like a new pro to take the prize. (Derek and Mark have each won two times already.)

But, I’ll be okay if Jennifer and Derek win. He’s the most genius choreographer ever, and always looks out for his partners, with ways to portray them in the best light. And having met him, I can vouch for that he’s as wonderful and genuine in person as he is on the show. For you skating fans out there, I compare him to Christopher Dean, the highest artistic compliment I can give anyone.

Now, to last night in specific. I keep hoping that the judges will just give Bristol marks low enough to prevent the voting public from being able to keep her on the show, no matter how many times they cheat vote. I really thought the producers would be embarrassed enough to instruct them to do so, if they couldn’t figure it out for themselves.

But it just does not happen! The judges are losing all credibility, even Len, who’s really the only one I respect anyhow. He’s the only ballroom person on the panel; Bruno is just a non-ballroom choreographer and Carrie Anne was a hip-hop dancer. They shouldn’t even be there! But don’t get me started on that. I hate this expression, but in this case, it really “is what it is“, and I guess we all have to accept it or not watch.

But it’s really upsetting to see Bristol, who can barely walk, let alone dance, do these lackluster, simple dances and get nines, the same scores as Kyle, who’s doing much harder choreography and selling it, baby! Even if it would be weird to hand-out sixes and sevens at this late stage of the competition, that’s exactly what they should be doing where Bristol is concerned.

She doesn’t even fit the bill to being with–she’s neither “dancing,” nor a “star.” What’s she doing on there?! If the show were titles Walking Around With Receptionists, she could probably win it fair and square.

So, back to the show last night. I feel that all the free-styles were disappointing. Bristol’s was awful, and it seems that Mark designed it for some sort-of drama, rather than dance steps. He knew she couldn’t rival the others in the actual dancing, but he should have at least tried to make it special.

And Derek just basically threw little Jennifer around, ala first season champs, Alex Mazo and Kelly Monaco. That’s not dancing, except maybe apache-style. I’m sure it’s because Jennifer isn’t able to do fun hip-hop dancing, or the like, as witnessed by the few seconds they showed in the video package last week of her free-styling to Mercy with her earbuds in. Very disappointing stuff.

Which brings us to Kyle, who really does deserve to win, and to whom the title seems to matter least because he’s the most mentally stable. He’s just enjoying himself and being happy to entertain us, the way it should be. He and Lacey should be a lesson to all people, especially, young ’uns, on the proper way to conduct oneself.

I really do want Kyle to win, and Mr. X and I voted for him as many times as legally allowed, without inventing email addresses. But, because of how good she’s been all season, and also because it would be fun to see a 50+ female win, I’d have no gripe is Jennifer comes out the victor.

As I warned Mr. X several weeks ago, Bristol just may win, bite my tongue, and if that travesty should occur, I fully except to find many more instances of disgruntled viewers shooting their television sets. So, as long as Bristol doesn’t win, we’re all winners.

[I should have some thoughts on the outcome in my 200th column next week!]