I recently realized that I haven’t yet written about figure skating this season! And in an Olympic year, no less!!!

But, between all my movie and awards shows reviews, and my hand issues for most of the year, I just haven’t had time to eke out a sports column. And truthfully, I didn’t have time to even watch the events, let alone write about them.

So now, with the recent US Nationals, I’m finally caught-up and all ready for Sochi. And, of course, I have some thoughts about what’s going on in the world of figure skating. 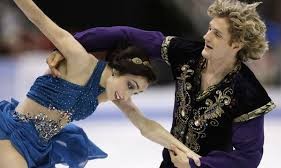 Mr. X actually watched most of the Nationals with me! And he made a point a week later, while we were viewing the beginnings of the new season of American Idol, which keeps resonating with me. (His point does, not the stupid show, which I’ll write about at a later date. Much later.) These idiotic Idol contestants, (the same with ones on all talent shows,) constantly state that this “means everything” to them, that they waited their whole lives for this, etc. etc. (For more of these moronic cliches, read this: itsnotaboutme.tv/news/list-competition-show-cliches. It’s one of my good ones because it practically wrote itself!) But it’s just singing, for which most of them haven’t even trained! Compare that to what athletes have gone through, none more than figure skaters, who face bodily harm each and every day!

These stupid “talent” competition shows try to make each contestant out to have a sob story, to get the audience interested. It’s disgusting that they all complain about the normal job they have, and say things like, “I never want to do another singing telegram,” or “I can’t pave roads forever,” being totally ungrateful for what they have, and dissing the rest of the population in one fell swoop.

Compare that to what figure skaters go through on a daily basis, for years and years, just for the hope of a modicum of success: up super early, their parents having to drive them long distances to a rink, returning there after school, then doing homework and going to sleep. No “normal” childhood with pals outside the ones you make at your rink.

And what about the financial toll??? These are just some of the costs involved with being an amateur skater: lessons, lots of gas to and from the rink, private coach, choreographer, costume designer, costumes, skates!, airfare and hotels for you, your family, and coaches!!! Being a young skater really costs a fortune! And very few reap the financial rewards of being famous in the end. The comparison is really mind-boggling.

I know the sacrifices are his or her own choice, (and that of their families,) but we never hear them complain and feel they deserve it because they have a little bit of grace, which can be compared to these “vocalists,” (who more often than not refer to themselves as “artists,”) who basically come to their competitions with training often consisting of just singing in the shower! 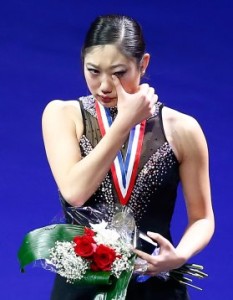 Okay, so let me get to the actual US nationals that happened at the beginning of this month. I’m happy enough with most of the results, but the ladies competition has me staying up nights, being upset. The official rules state that after the competition, a committee chooses the World team, which this year is the team that’s going to the Olympics in Sochi, Russia next month. Everyone thinks that the top two or three in each discipline, (the number of people going for each country is determined by the World results the year before; that’s why it can be just one, two, or three,) but that’s not necessarily the case. Supposedly, this committee decides each person’s fate taking into consideration all their results from the past year of competition, and sometimes even further back than that. But up until now, unless the top competitor, such as Michelle Kwan back in the day, is injured and therefore can’t compete at the Nationals, the medal winners have been the ones to move on to international competition.

So this year, Ashley Wagner, who won the Nationals the past two years and placed the best of the American girls in this season’s Grand Prix, (where all the top skaters from each country compete each week for seven,) messed-up big-time in both her short program and the long, and wound-up in fourth place. For the first time in history, the committee bumped the popular third place finisher, Mirai Nagasu, for Ashley. At the last Olympics games, Mirai, who was just sixteen at the time, came in fourth, which was remarkable. And now she’s been denied the chance to compete again, even though she came in third in the US this year, fair and square.

I’m sick over it! Especially because she’s my favorite female skater in the US right now. I feel they should have bumped the young girl, Polina Edmunds, who shockingly came in second, out of nowhere. If they had just given Mirai her fair marks to begin with, she would have come in ahead of that girl, and then bumping a sixteen-year-old for a twenty-two-year-old veteran would have been no big deal. (They could have still replaced Polina for Ashley this year, because the rules allow them to bump anybody for basically any reason. But they must figure she’s the next great hope, so they want her to get experience, I feel. Because if they were really looking at recent results, Mirai’s got it all over her, so Polina is definitely the one who should have been left by the wayside, not Mirai!)

For the record, I wanted Ashley to get to go, too, because she just missed the last Olympics, as well. I just like things to be fair, and Mirai deserved it. If their criteria is true, so did Ashley, but not Polina. Just sayin’. Again and again!

And they all love the winner this year, Gracie Gold, because of her name and confidence, and because she’s pretty. I know she’s excellent, but I’m still not taken with her, at this point. None of it really matters that much to me because I’m just hoping that Mao Asada from Japan wins it all, which may be a tall order with the return of Korea’s great Yuna Kim. 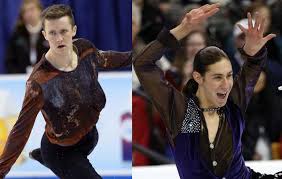 Jeremy Abbott and Jason Brown. I know this pic makes Jeremy look like he has giant saggy boobs, but please ignore that horrible optical illusion.

Quick note on the boys: I’m thrilled that twenty-eight-year-old Jeremy Abbott won the men’s title this year. It was his last chance, and even though I always find him less than charming, he is the best skater of the lot artistically, when he doesn’t get in his own way, mentally, and fall all over the place. That he held it together this year was great to see. Second place finisher, Jason Brown, is a hoot to watch, and his posture is gorgeous, so I’m happy for him. I just hope he gets a make-over next season because his greasy ponytail look is a big NO!

I can never get behind the Pairs in the US anymore, for some reason, (maybe because so few kids are getting into that discipline nowadays, so it’s gone way downhill,) but I’m thrilled for Dance Champions, Davis and White, who deserve the win at the Olympics, as well, so I’m rooting for fairness there, which isn’t always the case.

There’s nothing profound to say here. (For a great take on the ladies’ situation, read this, which was written by someone other than me: blogs.wsj.com/speakeasy/2014/01/14/mirai-nagasu-ashley-wagner-and-the-myth-of-the-golden-girl.) I just wanted to bring you non-skating-watchers-until-the-Olympics up-to-date, and tell you whom to be on the lookout for from this country. And to say that I hope Mirai, whom I’ve met several times and is a really sweet girl, hangs in there, works harder, doesn’t quit because of this bummer of an experience, and dominates the sport for the next four years. That would make it a great story rather than the gut-wrenching one it is now.