Today begins the 2010 Wimbledon tennis tournament, so I just want to warn everyone that I’m usually totally unreachable during it. I watch every second, and even miss parties and events.

I promise, I’ll still try to post a new column daily, but if I miss a day, please forgive me. I have several already written or planned, including a review of the best new restaurant I’ve found in quite awhile, so please continue to do your daily checks on this site, (as I’m sure that you all do!) 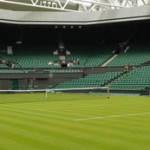 The gorgeous grass on Center Court before the tournament begins. Enjoy it while it lasts!

Now to Wimbledon. It’s the classiest tournament all year, and I just love looking at that beautiful green grass at the beginning of the fortnight. (It looks horrible by the end, though.) And I get to have my favorite culinary creation on the last two days–that’s the only time I allow myself to have it all year, because it’s really too fattening to have any other time. So, pay attention to the end of this column, because this is the only recipe you’ll ever see me giving out, I’m sure.

But first, a little about the tennis itself. Of course, I’m praying for the wonderful, charming, and even-tempered Roger Federer to win his seventh Wimledon title. (Mr. X laughs when I call Roger “the stranger I love most in the world.”)I really like Raphael Nadal, too, but I’m just not ready for the changing of the guard for another couple of years. Rafa has the French Open–I hope that’s the only championship he gets this year. An interesting note to their rivalry is that even though Rafa took over the #1 ranking from Roger after his win at the French Open a couple of weeks ago, the Wimbledon committee has placed Roger as the #1 seed. They said that’s because he’s still the best player in the world on grass. I agree. I just hope it’s not too much pressure on him.

On the women’s side, I’m rooting for anyone but the Williams sisters. I always hope that the lovely, and most popular female player, Kim Clijsters, wins everything she does in life, but she was injured last I checked, so I don’t know. (She is listed as playing, though.) The two French Open finalists, winner Francesca Schiavone and Sam Stosur, are also two to look out for. And they’re both nice. Just about everyone not named Williams is.

Center Court Wimbledon, at night, with the one-year-old retractable roof.

It’s Strawberries and Cream, done the correct way. (An old boyfriend taught me this, and it’s the best thing he did in all our time together. Well…second best thing.) This recipe is for just one person over two days, but you might have a tad left-over for that Monday, just in case of a rain delay. (Oh wait, they can’t have them anymore because they put a retractable roof on center court last year! But, it pays to be prepared for all eventualities.)

So, this is what you do:

Buy just one box of ripe strawberries, no matter how small it looks at the store. The night before, wash them all, core the green thingy and attached white innards. (I actually have a strawberry huller for that, that I got for hosting a Tupperware party back in the day, but a small knife should do fine, as long as you’re careful. Possibly even long sharp fingernails, but that‘s kind-of gross.) 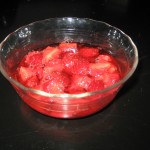 What your individual dish of strawberries should look like before you add the heavenly cream.

Then I usually rinse them again in cool water, just to be safe. Cut each one into about four pieces, and don’t wipe up the red liquid that’s accumulating on the plate. Put it all into a tall, thin-ish cylinder, like a tall Tupperware juice container. The pieces will be closer to the bottom than to the top. Next comes the only hard part, because I don’t really measure. I mix-in about twenty packets of Sugar In The Raw. This is the only sweetener I can vouch for to use in this recipe. I’m sure it will work with white sugar, as well, (brown sugar will give it a different taste,) but I’m happy with it this way. There’s really no way to tell if you need more or less right away, because it has to marinate overnight. So, you won’t have an exact measure your first time. Actually, better to make it less sweet rather than more, because you can always add some to your bowl in the morning, though it won’t taste exactly the same as the overnight batch.

Cover it and place in the refrigerator. Before you go to bed, gently stir it around a time or two. I find a wooden spoon works the best for that. 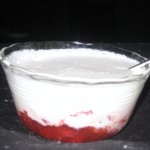 After you add this much cream, start swirling, and enjoy!

When you wake -up, stir again, and then get ready for the best concoction in the whole world! I have it only while watching Breakfast At Wimbledon, which is what they call the Finals. You’ll be in such heaven, you won’t be as sad if your favorite should not win, bite my tongue. But wait–we’re not done!

You pour some of this into a low shallow small bowl. I love a medium-sized glass Pyrex sherbet-type dish. Make sure you get half berries and half liquid. Next comes the best part: very slowly pour in heavy whipping cream. No other kind!!! (I buy a pint for the whole week-end.) And enjoy your mouth watering as you see it all swirl together. (I’m having trouble getting through writing this without drooling on the keyboard, as a matter of fact.) Continue swirling and then savor small spoonfuls and enjoy!!!

You can have it anytime you want, especially as a luxurious summer breakfast, or a classy poolside treat. But I suggest waiting for the Wimbledon Finals to make it that much better. And never again for another year.