Sadly, one of the last Grand Dames of Old Hollywood, Jane Withers, left us this past week-end. I’m so glad that I got to meet her a few years ago, so I can confirm to you that she was as delightful as she appeared to be. 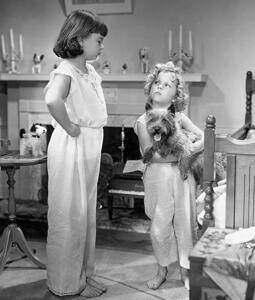 She started working as an actress at the age of three! And as the years went on, she became a well-known one. Of course, most people of a certain age know her best as Josephine The Plumber on commercials from the ’60s and ’70s, but fans of old movies are familiar with Jane’s broader body of work, beginning with her portrayal of a bratty kid nemesis to Shirley Temple’s character in the 1934 film Bright Eyes.

And her association with Ms. Temple is exactly what brought us together to begin with. When offered the opportunity to interview Ms. Withers at the opening of the Love, Shirley Temple exhibit in Santa Monica, I jumped at the chance. And, of course, I loved her! I’m proud to say that we chatted for quite a long while; we were laughing so much that the people in charge had to practically pry us apart! 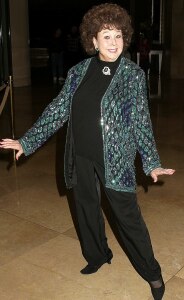 I happily discovered that Jane was as adorable as I had expected. She endeared herself to me from the get-go by gently moving my way-too-long bangs out of my eyes, just as my mother used to do. She told me that she, too, has often worn bangs, so she knows how challenging it can be to deal with them. That one small gesture gave me a warm feeling from the start. (I only wish I had known at the time of her immense doll and teddy bear collection, which numbered in the thousands! That was another thing she and my mother had in common, although Maybelle’s aggregation was much more modest, taking up just our living room as opposed to Jane’s warehouse full!)

I soon learned that Jane Withers was a gal after my own heart, and not just because of our bangs connection. We also discussed our love of manicures; her nails looked way better than mine did, and when I complimented her on them, she shared her manicurist info with me. (Alas, I still have never found time to visit the woman, sticking with doing my own. I sure wish I had saved Jane’s nail tech’s number now, though. I can just imagine the giggles she must have had with her number one client each week!) 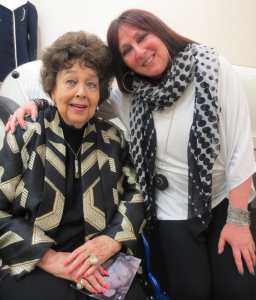 We were also simpatico in our affection for Jane’s childhood pal Shirley Temple, and shared a semi-disdain for today’s child actors. When I mentioned that I feel most of them are obnoxious, the classier-than-I Jane said she just chooses to not watch them.

On top of all that, she laughed at everything I said, which, of course, thrilled me. In the middle of our tete-a-tete, she emphatically declared, “You’re nifty!!!” That statement conjured images of us being besties in a ’40s movie! It was so fun to share even that little bit of time with Jane Withers. She made me feel like we were old pals.

So now my heart goes out to her family, friends, and many fans worldwide, the legion of which will grow in perpetuity, as new people discover her prolific (especially for someone who retired the first time at only twenty-one) work all the time.

RIP, Jane Withers. At ninety-five-years-of-age, you definitely deserve the peace! (And please say hi to my little mother, and tell her you pushed my bangs aside in her stead.)