It’s taken me a week to write this because I’m so heartbroken at the loss of this young man. Adreian Payne, first a basketball star at Michigan State and then an NBA player, was shot and killed last Monday. What a horrible loss not just for his family but for the entire human race. 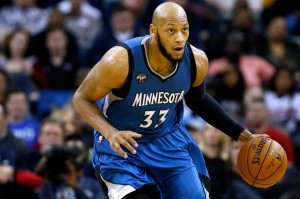 Adreian Payne in the NBA.

His death is too painful, so I’d rather celebrate his way-too-short life.

When he was drafted into the NBA in 2014, I wrote this about him: “I have always loved Adreian Payne! I’m so glad he went fifteenth, especially since he was one of the twenty players the NBA invited to be in attendance. And he seemed so grateful, which, of course, I love.”

Not only was he drafted in the first round, (which, if you don’t know pro sports, is a really big deal,) but the host of the Draft Show said of Adreian, “You’re not only getting a terrific player, but you’re also getting a class man, as well.” Adreian’s the only one in the entire draft class that he said that about. 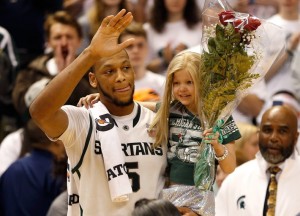 Adreian came to my attention when he was a college player because of the national praise of his friendship with a little girl who had cancer. Lacey Holsworth and Adreian met in 2011 when he and his team visited a hospital she was in. They bonded right away, and kept in close touch for the rest of her brief life. He invited the Holsworth family to his college basketball games and called her his “little sister.” He even held her in his arms on his Senior Night, and also to cut down the net when the Spartans won the Big Ten Championship in 2014, shortly before she passed away. 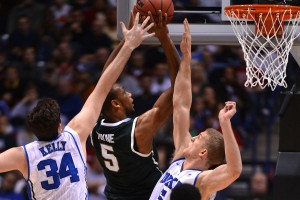 Adreian Payne in the middle, outdoing his defenders.

I really couldn’t believe someone as young as Adreian could be so good. He was an angel on earth.

And Adreian Payne was exactly that person to the end. He was killed while trying to help a friend of his girlfriend who was going through a domestic violence situation.

I really pray that his family and friends can find some peace at some point. Perhaps that peace can come to all who loved and admired him by knowing that he and Lacey are reunited in heaven.