Yes, all the eateries in Los Angeles are rightly shutdown for the duration, but before the world got absolutely bonkers, Drago Ristorante in Mid-Wilshire’s Petersen Museum threw a fabulous soirée to preview their new menu and announce the beginning of their full dinner service. 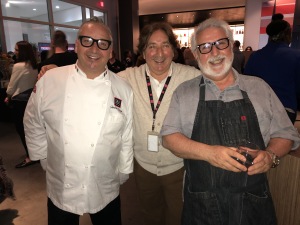 Three of the famous Drago siblings (L-R): Tanino, Calogero, and Celestino. Photo by Karen Salkin, as is the big one at the top of this page.

[Note: Contrary to the information that some nescient media people may have disseminated, this fete was not the opening of this place; it’s been open for four years now!!! I wish those witless folks would pay attention to the purpose of events they show up at! Many of them are just there for the free food! Shameful.]

But back to the lovely party. There seemed to be no end to the delicious dishes on offer. As soon as we checked-in, even before we entered the actual restaurant, there was an antipasto  buffet of cheeses and vegetables and breads, which featured what my friend Marc deemed to be “the most flavorful tomatoes” he’s ever had! 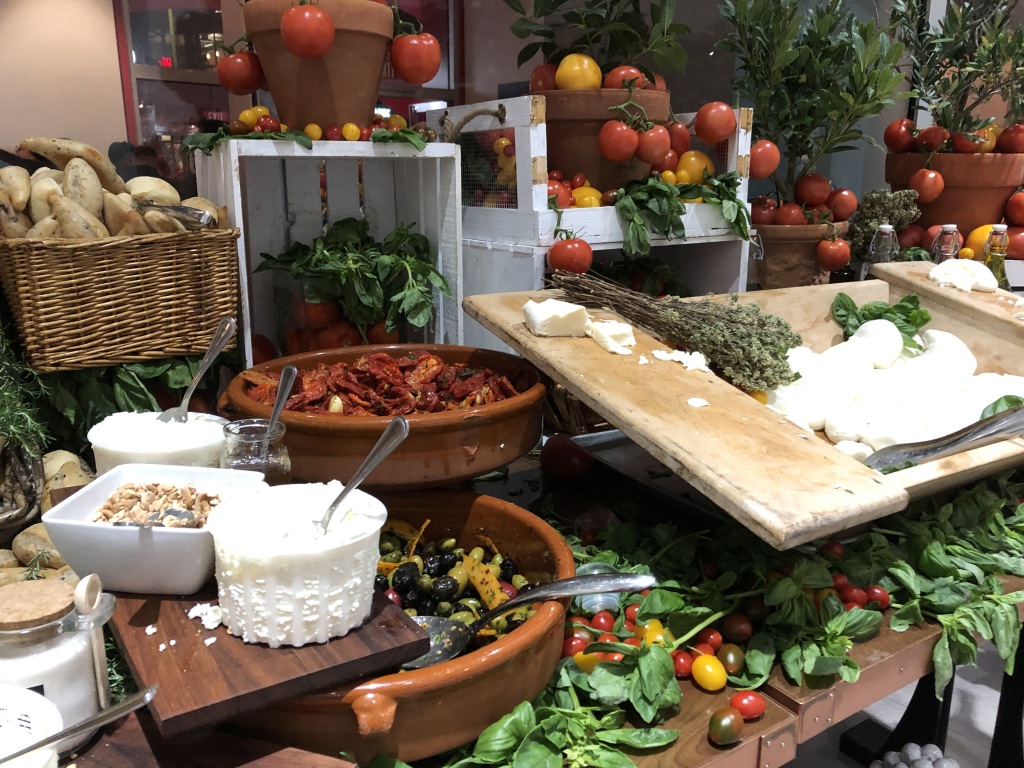 The stunning antipasto buffet on the way in. Photo by Karen Salkin.

I swear, all those treats would have really been enough, but that was far from it. Inside was a pasta bar, (both of our fave was the creamy risotto which was paired with red-sauced meatballs,) and an open bar with a few specialty cocktails. And all night , the amiable servers passed tasty tidbits, such as my favorite, arancini, (which are Italian rice balls.) 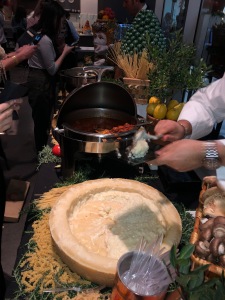 Part of the pasta bar. (I guess I wasn’t the only one taking pictures of it!) Photo by Karen Salkin.

I don’t even know where the pizza was situated, but somehow, we kept getting little slices everywhere we went! Marc and I basically headquartered out on the red-hued patio all night, and somehow the food seemed to find its way to us!

But we took ourselves over (several times) to the pièce de résistance—a dessert bar which featured four perfect items. (Good thing they had a person there to serve us, or else it all might have been gone before I got over to it. I can definitely understand people not being able to stop themselves from gobbling-up all that deliciousness before everyone got some!) There were tiny strawberry panna cotta cups, mini chocolate cakes, the cutest cannoli ever, and a croquembouche, which was made-up of tons of delectable profiteroles. I adored every member of that quartet of scrumptiousness! 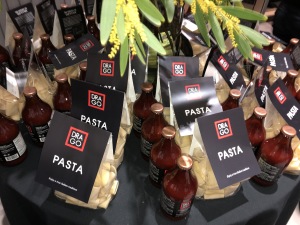 The table of take-home treats. Photo by Karen Salkin.

This party was the last time I left the house because, even before it became mandatory, I realized that I wanted to be part of the solution, not the problem, so I’ve stayed put at home with Mr. X. But Drago Ristorante even helped me with the isolation! As we left the fete, each guest received a package of interesting Paccheri pasta and a specialty cherry tomato sauce to take home and cook ourselves! I’ve yet to need to do that, (because, by some miracle, we’ve had enough fresh food that has to be used first,) but I’ll let you know how my attempt at emulating Drago goes. (The results will be on Twitter next week, so, if you don’t already follow me there, this might be a good time. @MajorCelebrity.)

When the world returns to normal, I’ll try my best to make time to do a full review of Drago’s new menu for you guys. I can tell you right now, though, that I’ll be headed right for the arancini and panna cotta. Until then, please stay safe and healthy!