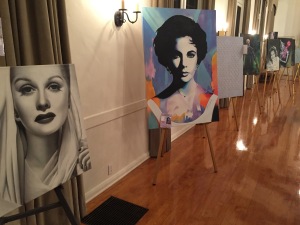 Mr. X and I had a really nice time recently at a party for artist Mario AC Della Casa. It was held at the interesting Beverly Hills Women’s Club in—where else?–Beverly Hills. That venue has so much space! It was a pleasure to not be crunched-in with the rest of the guests at a party for once.

The interior was fabulously enhanced by many of Mario’s celebrity paintings. I’ve seen his “genie bottles” at events before, and even talked to him about his work on the phone earlier this year, but I had no idea he was also a portrait artist! His likenesses of show biz icons, like Elizabeth Taylor and Lucille Ball, are stunning. 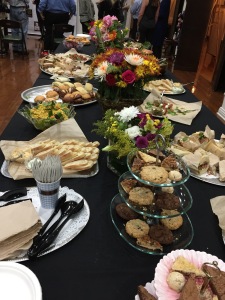 The buffet. Photo by Karen Salkin.

His work was on sale at the event, and a portion of the proceeds went to the John Ritter Foundation. As you may know, John was a pal of Mr. X and myself, so this is a charity I care about.

Mario also unveiled a few personal portraits he had been commissioned to do prior to the fete. The subjects stood on stage with him, and let me tell you—Mr. X and I were pretty impressed with the results. I’ve rarely seen an artist capture a person so closely before! (Therefore, I can’t use him—I like people to paint and draw me much better-looking than I really am!)

We guests feasted all night on a gigantic spread of all kinds of sandwiches, salads, and desserts, and there was also a beautifully-decorated, and generous, bar. 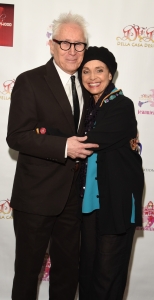 But the most wonderful part of the evening was witnessing a mini-Rhoda reunion! The genuine affection that co-stars Valerie Harper and Ray Buktenica have for each other was so apparent that it gave everyone around them a great feeling. Everyone had big smiles on their face while they were admiring the pair. I’m actually pals with both of them, so I had the best time of everybody in attendance! I hung-out with them all night, along with Val’s husband Tony Cacciotti, whom I’ve also known for years. (And let me tell you—that man is a solid muscle! I almost broke my shoulder hugging him good-bye!)

For everyone who asks me about this all the time, I’m happy to report that Valerie is doing pretty well. She still looks gorgeous, and is as fun and appreciative as ever. And she told me a wonderful backstage story about her and Ray. She said that when Ray was hired for Rhoda, she thought that he was “too good-looking to be funny,” so she was was very pleasantly surprised that he was a riot! She spent the rest of this party laughing at everything he said. (And so did I!)

So, this was a very successful event, in every aspect. A good time was had by all, especially me!