As someone who used to throw my own birthday parties every year, I so appreciate that gown designer Sue Wong just did the same thing.   And nobody throws a soiree better than she does!  Her birthday fete last week could not have been more chic.

It was perhaps her classiest soiree yet.  The guests this time just had a bit of a different vibe.  Maybe that was because it was Sue’s birthday, rather than a business event. And I was happy to see that I wasn’t the only one who knew enough to bring a gift when it’s the hostess’ birthday. Good to see that doing the proper thing is still in vogue somewhere! 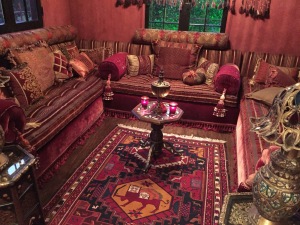 One of the popular rooms. Photo by Karen Salkin.

It was held at her beautiful Los Feliz estate, The Cedars, which has tons of Hollywood history.  I love having a reason to really dress-up nowadays; occasions like this in laid-back L.A. are few and far between.  But the uber-fashionable Sue always inspires us to put on our finery.  Many guests were dressed to the nines, and everyone looked delighted to be so attired.

Speaking of attire, this event featured several models rocking Sue’s gowns and attendant headpieces.  Their presence added so much to the festivities. 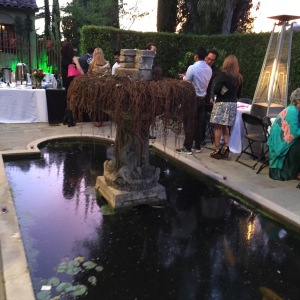 Sue graciously greeted the assemblage in her front patio, looking as elegant and put-together as always.  I just cannot picture that woman with a hair out of place!  I have a feeling she doesn’t even own any sweat clothing, let alone be seen in it, as the rest of us in Hollywood have!

Though many guests chose to spend the evening in the gorgeous interior, the outside was just as inviting.  Tables were set-up in the various gardens, with flower petals adorning the white tablecloths.  And, between the inside and outdoors, there were not one, not two, but three bars. 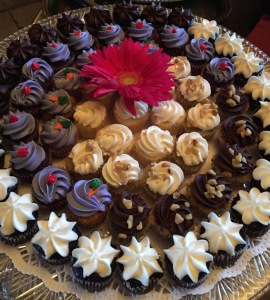 One of the dessert platters. Sue Wong. Photo by Karen Salkin.

For the first hour, we snacked on delicious passed hors d’oeuvres, including meatball skewers with tomato and pineapple, perfect non-greasy (and therefore easy to hold) potstickers, and a really interesting one that newly-health-conscious I really appreciated–tiny cups of chia pudding with sliced strawberries.  Yu-um!

During that cocktail hour, guests mingled and explored a few of the exotically-decorated rooms that are open during Sue’s parties for just that purpose.  There were a lot of selfies being snapped during that time!  The friend I brought had never been there before, and could not have been more impressed with the whole scene. 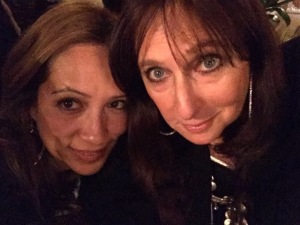 Sharon Helfand and Karen Salkin. Yes, even selfie-eschewing moi could not resist! (But lack of light made us look so much worse than we did in person, especially Sharon, who’s really beautiful!) Photo by Karen Salkin.

When it was time for dinner, we were treated to a buffet of all Chinese delicacies, (to perhaps pay tribute to Sue’s heritage; we were there to celebrate her start of life, after all.)  There was honey shrimp with walnuts, tangerine chicken, fried rice, (of course,) thin noodles, bbq pork, and so much more.  I was happy to see that Chinese chicken salad was included that night, since salads are my thing these days. It was delish, and the other guests told me the rest of the fare matched up to that assessment.

After dinner, (and during the dessert buffet,) everyone congregated in the opulent living room for the evening’s entertainment.  The uber-handsome Ronn Moss (of soap opera fame,) played a set of pop music with a group of other musicians.  (He used to be the lead singer of the group Player, whose big hit was Baby Come Back, which I don’t think many people know.)  I, sadly, had to leave right before they began playing because my friend (who was driving) had a lot of work to do, but I heard they got the crowd rocking, and were followed by many more musical performances. 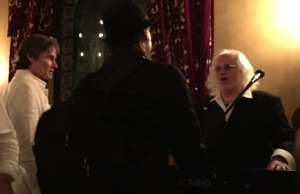 Ronn Moss on the left, with another musician on the right. Photo by Karen Salkin.

Hopefully, I can stay at Sue’s next celebration for the entire night.  She has more parties than everyone I know, on both coasts, so fingers crossed that I’ll get that shot really soon.

And, since I missed singing it to her that night, (luckily for her–I couldn’t carry a tune even with someone doing it for me!,) let me wish it to her here.  Happy Birthday, Sue Wong!