Before I tell you all the fabulous details of this lovely charity party in Beverly Hills, I have to first relate a funny story about it. When I got off the elevator at the Peninsula Hotel’s gorgeous rooftop pool, where the party was held, I saw signs all around that said “It’s Not About Me,” which I’m sure you know is the name of this e-zine! Since it was just a few days before my January 14 birthday, for just a second I thought it was a surprise party for me! Now before you start thinking that I was just being a tad self-centered, let me tell you that it’s happened before! And at a nice hotel, too! Here’s that story: 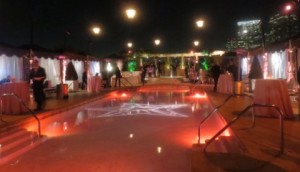 The pool area where the party was held. Photo by Flo Selfman.

When I was first seeing Mr. X, I knew that I couldn’t have a birthday party that year because he didn’t know most of my friends. I felt bad, because I had had parties my whole life, no matter what the situation, but I figured oh well; I was happy to just have him! I was booked to shoot my first television show a couple of days after it, and on my actual birthday, my manager was taking Mr. X and me out to dinner at a place I had always wanted to go to in Beverly Hills. Then my manager called me that day and said that Mr. X is going to not be pleased, but the people from the show were having a cocktail party at the Beverly Wilshire Hotel, and they were insisting we stop by before dinner. We told Mr. X, who reacted as expected, but since it involved my fledgling career, he agreed to stop by for a few minutes.

I was all dressed-up for my birthday dinner, and being a young starlet, I was kind-of actually looking forward to this Hollywood cocktail party, as well. As Mr. X and I walked into the party room it was being held in, a photographer started flashing pictures of me, and as I looked around, I saw all my friends! It was indeed a surprise party for me! I almost fainted. I really wasn’t expecting that, at all.

There’s much more to the story of that actual surprise party, which is a riot, but I’m just telling it now to show you that that’s the reason I thought, for one brief second, that this Canadian cocktail party was really for me when I saw the name of my e-zine on signs all over the place!!!

But then I noticed that under “it’s not about me,” the signs read “it’s about humanity.” I think that’s a little bit kinder than mine, (which after “it’s not about me” adds “but it really is,”) don’t you?! I guess that’s why they’re a charity and I’m not. (Well, that’s not exactly true; I’m Mr. X’s charity!)

Now here’s the skinny on this lovely Canadian soirée:

As you’ve probably figured out by now, it was held on The Peninsula’s stunning Roof Garden, and it benefitted the Canadian Museum for Human Rights, which is scheduled to open September 2014 in Winnipeg, Manitoba.  To that end, we heard several speakers on the subject, and I hope that the entire assemblage was thinking what I was, which is: what cause could be more important than human rights?!

Maybe that’s why the crowd was so much different than the usual party ones in L.A.; they were very peaceful and definitely not the schnorrers who blight every soiree I attend. I loved this vibe! 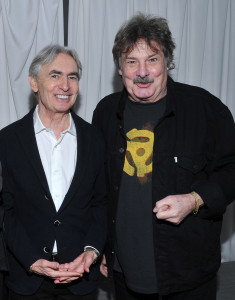 David Steinberg and Burton Cummings, whose shirt I love! Photo by Vince Bucci.

There were several celebrities who were enjoying along with the rest of us, including Tommie Chong, (and no—don’t even ask; I did not see a cloud of smoke following him,) Dallas‘ Charlene Tilton, with whom I had a long discussion about our mutual love for her first house in this town, (yet another long story for another time,) and fabulous, and proud Canadian, comedian and director David Steinberg.

David holds a special place in my heart for something that happened years ago, when I was first doing my show, Karen’s Restaurant Revue. A friend who was a production secretary on a sitcom had invited me to the set. Being the skinny young girl I was, I wore my usual attire that included a very mini skirt. (But I paired it with my signature colored sneakers, so it wasn’t like I was one of those girls trying to be sexy.) She was busy telling me that I shouldn’t wear stuff like that to a set because the entire crew was ogling me. Just then, I saw the very famous director, David Steinberg, rushing over to me very animatedly, (for low-key him.) I froze, thinking he was going to kick me off the set, but came back to life when he said he was just coming over to meet me because he was a fan of my show! One of my very first famous ones!

He tried hard to talk me into doing stand-up, (my show was always called “sit-down comedy” because I sat behind a table,) and to this day, I always think of that meeting fondly, and totally appreciate every word he said. I still didn’t want to be out in smoky clubs late at night, so I didn’t do much stand-up, but encouragement from one as talented as he meant the world to me.

So, I was thrilled to get to chat with him once again at this Oh Canada fete. And happy to see that he looks pretty much the same as he did back then. 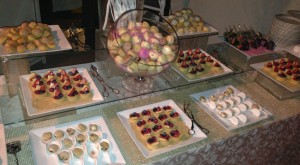 While seeing David again was my favorite part of the festivities, everything was excellent about it. The setting, with private open cabanas that many of us sat in, was gorgeous; the food, which included passed hors d’oeuvres, and various buffets including a dessert one, was really interesting; there was plenty of musical entertainment, the highlight of which was former The Guess Who member, and well-known Canadian solo artist, Burton Cummings; we heard informative speeches; and most important of all, the service was absolutely lovely. Every server I talked with was caring, and happy to be doing his or her job, which put us guests at great ease. 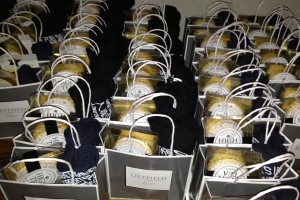 As if all that wasn’t enough, we each left with a goodie bag that included a tee-shirt with the charity’s mission statement on it, and a mini chocolate cake from title sponsor Lilyfield Cakes.

As you know, I’m always happy to help out a worthy charity, and the Canadian Museum for Human Rights is definitely one of them! If you live in Canada, or plan to visit, please make sure to include it in your agenda for September of this year, and ever after!