Trending
You are at:Home»PARTIES»PARTY: MONTALBAN HOLIDAY PARTY 2018
By Karen Salkin on January 16, 2019 · PARTIES

I got so busy last month that I never had a chance to tell you about this end-of-year soiree. But it was such a fun festive fete that I can’t let any more time go by without lauding it.

In recent years, the Montalban Theatre in Hollywood has been famous for its rooftop movies. I had thought they were just in the summer, but it turns-out that they’re sort-of year-round! At least through Christmas anyway. (Check-out their website for all the deets.) 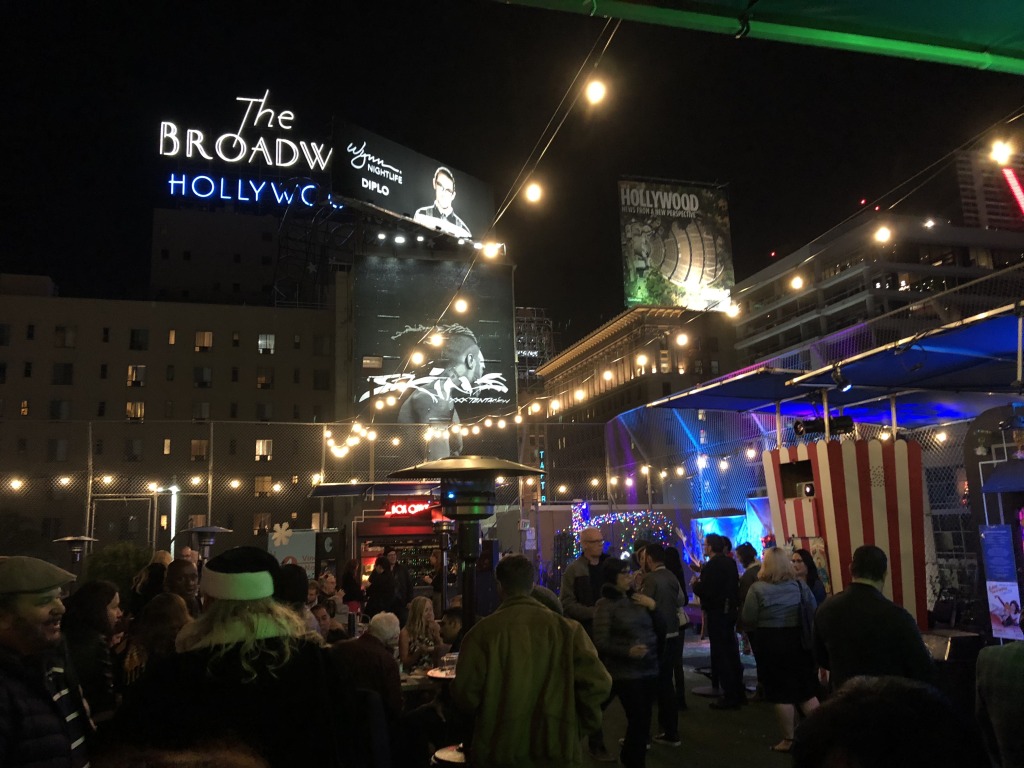 The strange thing is that I had been planning to see the film of the Royal Opera House in London’s The Nutcracker at this venue the night before the party, but, sadly, very few of my pals are cultured enough to go to a movie like that. And the one or two who are weren’t around on that date. But I had the date wrong anyway. So, when I received the invitation to the Montalban Holiday Party, I jumped for joy because the celebration included…a screening of this classy holiday film!!! For once, the food was secondary! Actually, beyond secondary. Nothing tops beautiful ballet for me. 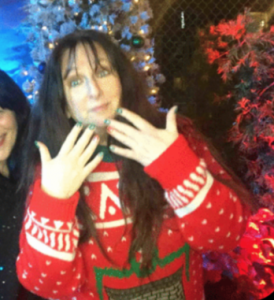 This is a still from the GIF Photo Booth. Karen Salkin is rocking her (not) Ugly Christmas Sweater, which features a moving fireplace right under where this pic cut-off! (And showing off her holiday nails, as well.)

And because seeing the outdoor movie would be half of the evening, no little dresses and heels were necessary for this soiree. The order of the day was boots, heavy jackets, scarves, hats, and gloves. The challenge was to still look festive, which only the hostess, my guest, and I rose to. I didn’t even see one Ugly Christmas Sweater other than mine, (of course,) which is actually the furthest thing from ugly. It’s fabulous. (And really belongs to Mr. X, who’s the genius who found it. He’s kind enough to lend it to me on occasion.)

But let’s go in order.

The evening began in the mezzanine bar where they were serving drinks by the gorgeous tree. Then we went up to the roof for the rest of the night. 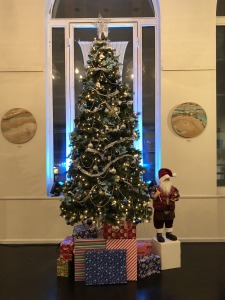 The tree in the mezzanine bar. Photo by Karen Salkin.

You have to be in shape for a visit to the Montalban rooftop because it’s four flights up, with no other way to get up there than to walk. (No wonder the servers were all uber-young!) And the restrooms are on the ground floor only, so I definitely got my ten thousand steps in that night! (It was either that, or rock some Depends.)

I love that the Montalban roof’s entranceway was bathed in colorful lights. And once on the roof, the first thing we saw was an adorable cheerful holiday display.

Beautiful music was piped-in all night, augmented by gorgeous live violin accompaniment by Dayren Santamaria. You could tell that that girl loves to play!!! And we loved hearing her.

That whole area was the background for the GIF booth. I have to admit that I like still photo booths better, but this one was also fun. I hadn’t realized it had already started as I was laying my purse down with my back to the camera, so all we got was my butt bending over!!! I should have saved that one, but we went with Take Two, (which was actually not much of an improvement!) 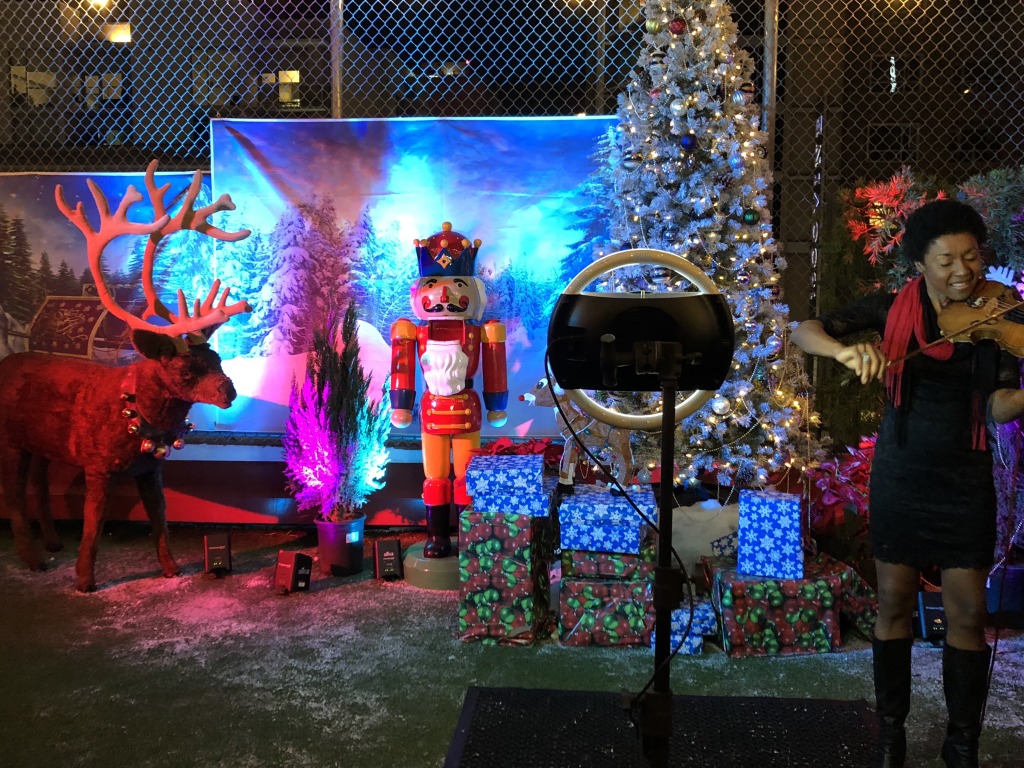 All the while, tasty tidbits (burgers, fries, and little salads,) were passed by sweet servers for the next two hours, while everyone mingled.

And then the classy among the assemblage, (which was not a big number—shame on Angelenos!,) settled in for the next two and a half hours to watch the film of the Royal Opera House’s gorgeous rendition of The Nutcracker. (More on the actual film in a minute.)

I’m happy to report that the sort-of sling-back seats, both singles and for twosomes, were very comfortable. And the Montalban provides the headsets, which not only amplify the terrific sound, but also helped to block-out all the rude party people who stood right behind the seats, chatting at the top of their lungs while the cultured folk were trying to hear the stunning Tchaikovsky score! 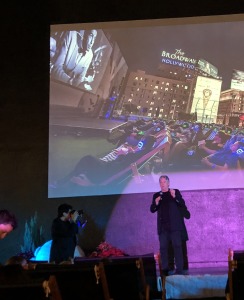 At the break in the film, I was thrilled to discover that the bar was serving hot drinks. I choose hot chocolate, (which was basically just hot water, but I was grateful to have it to hold in my cold hands at that point.)

Now about the film, I’m thrilled to see a good Nutcracker anywhere anytime, but I was especially appreciative of this one. It was all absolutely gorgeous, but it was an extra privilege to witness the jaw-dropping beauty of the dancing of Marianela Núñez as the Sugar Plum Fairy!

I felt that the universe owed me a good one since I had to recently suffer through the dreadful Disney film, The Nutcracker and the Four Realms. That one was brutal. (You can read my review of it here: itsnotaboutme.tv/news/movie-review-the-nutcracker-and-the-four-realms-review.) I’m so glad that that travesty was not the last Nutcracker I saw this past holiday season, to horrify my memory for the next twelve months! 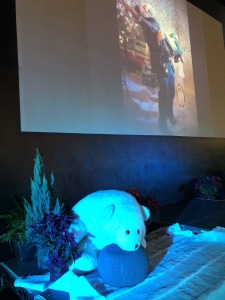 Also, because I was overbooked, as always, in December, (which I am definitely not complaining about, by the way,) I had to give up the live version by the Long Beach Ballet just the week-end before, which I have a feeling was fantastic. So, seeing this beautifulness sort-of made-up for all of my Nutcracker debacles last year.

I’m so glad that I ended my season of holiday partying with a celebration at a venue that’s named for one of the nicest men I’ve ever met, Ricardo Montalban. I can’t wait to see what entertainment they have for us in 2019!