For those who missed it yesterday, I’m back from my month in New York, and raring to go. I have all kinds of fun stuff to tell you about from there, mainly restaurants, of course, but I made a point of getting back to Los Angeles in time for one of my favorite occasions, Halloween. (It’s not really a “holiday,” per se.) I’ve spent many in New York, and probably the three best ever in Rhode Island and Massachusetts with the young brothers Hazel, but I’ve also had a few good ones here, especially recently. So, Halloween in LA it was. 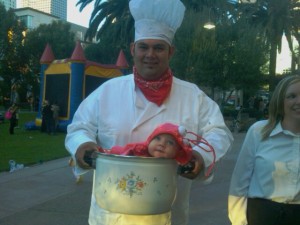 Ree Rodriguez and son wearing the most clever, and adorable (in the case of the lobster baby,) costumes at the party.

But, with the terrorist scares in Brooklyn, where I live when I’m there, and Kennedy Airport, and the ensuing delays, I was too jet-lagged to want to go out, especially in costume. But, I was invited to help at a fabulous party downtown that I had ruled-out last year, so I was determined to put in an appearance in 2010.

For years, I’ve seen hipsters move into downtown and make it quite the living scene, but I had never considered that families were moving there, as well. One of my favorite PR firms, Berman-Singer Public Relations, apprised me of the fact that hundreds of children now call downtown home. 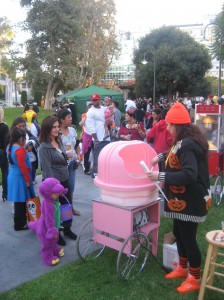 To that end, they, and the organizers, wanted all of those kids to have a fun, safe Halloween in their own backyard, so that they didn’t have to go to other ’hoods to trick-or-treat. So, all downtown LA families were invited to the Third Annual Halloween Party for Downtown LA Kids. And since I was a volunteer, I got to have even more fun than they did because you always get joy out of helping others. (I don’t know how much help I really was, but more on that later.)

It was held at Grand Hope Park at Fashion Institute of Design & Merchandising, which turned-out to be a perfect venue for this. It was big enough to have lots of room to see and be seen, without getting scrunched, and small enough that no one could get lost. Or more importantly, be far away from the treats. (The trick turned-out to be me doling out the cotton candy!)

This party was entirely free, with hot dogs, individual bags of baby carrots, juice pouches, water, and candy sponsored by Ralph’s Fresh Fare, (kudos to them for that, btw,) and everything else (cotton candy, popcorn, bounce house, game truck, photo booth,) being taken care of by the Downtown Center for Business Improvement District. And I was happy to see many security guards patrolling the area at all times, if even just to prevent revelers from making fun of my cotton candy-spinning prowess. 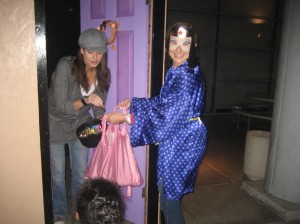 My favorite innovation was the three “doors” stationed around the park, so that the kids could still have the fun of going trick-or-treating. You knocked on the doors, and volunteers answered them and gave-out candy, just as would happen traditionally. If you didn’t have a bag or pumpkin for collection, they were handed out at various stations, and you could even decorate your own at the arts-and-craft tables. You know I had to hold myself back from making one of those myself! 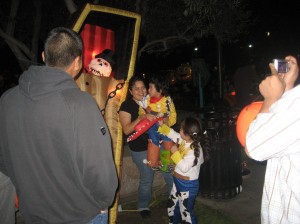 Scary stuff once it got dark.

The event also featured an inflatable bounce house, tons of Halloween decorations, and the famous Game Truck. I was happy to see so many grown-ups dressed-up in the spirit of the holiday. I’d say most of them were wearing at least some costume. My friend Lucia and I were particularly impressed with not one, but two Frieda Kahlo’s! One of them complete with unibrow! (The other just didn’t want to mess-up her cute face that much.) I guess downtown does have its share of intelligentsia. (I myself was dressed as a slice of pepperoni pizza, though my earrings were of a vegetarian cheese pie and slice. I guess I am comestible-centric!)

And even though this was a G-rated shindig, I did get to see some real horror. It was on the faces of the recipients of my pitiful cotton candy shapes. While I did hawk the stuff during my gig as the star of the sideshow of a traveling circus in my younger years, I had never actually made it before, which, by the way, is just pure spun sugar. (My teeth hurt just thinking about it.) And let me tell you, it was not easy to make it look pretty. Even the smallest kids seemed to know how weird my creations looked. But I got away with it under the guise of that this was special for Halloween. Maybe next year, I’ll volunteer for the popcorn machine. How much damage can I do there? I guess we’ll find-out in 2011.