I always love Venice’s artsy Abbott-Kinney Road, but, in the middle of my uber-hectic life, I never remember to go there! So, when I was invited to the launch of the Avocado store there, I rearranged my week to make sure not to miss it. (And after all that, I almost did, anyway! But that’s another story.) 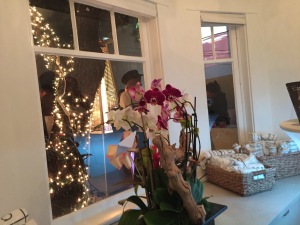 An interior space, with a window looking out onto the deck. Photo by Karen Salkin.

My co-hort, Alice, (whose remarks are the ones in quotes for the rest of this article,) insisted that we hassle to make it, and we wound-up so glad that we did. She told me that she “kept thinking what a great name” Avocado is, and described the event as “a cool, young, happening party, with indoor and outdoor fun.” She said she could tell “everyone was having a great time!”

Most of the guests were from a new set of fashionistas, and everyone looked hip and fashionable. I never wear any form of headwear, but I was cold, so I chose a gray, baggy skull cap, and guess what—so did half the people there! And when I saw similar ones in the trendy athletic-wear boutique, I knew I had chosen well. Even though I’m known as a leader, not a follower, I do love being on the same vibe as the rest of the in-crowd on occasion. And this was one of those times! 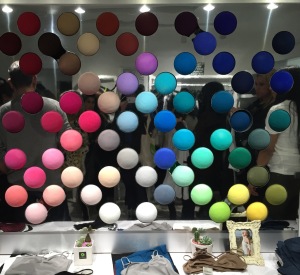 The store is beautiful. Very crisp and fresh-looking, even with hordes of people pouring-through their wares. And we wanted every item we laid eyes on. I might work-out more if I were thusly attired. (And I will have that chance—in each “generous” gift bag was a white stretch tank and what Alice deemed “the nicest yoga capris, which are great for any work-out, or just to go around town in.” Now, if I could just still fit in a “small,” I’d be all set.)

Since no party in LA can be about just one thing these days, there were a couple of fun activities there. Amidst all the craziness, in one popular area, they had women who were doing mehndi tattoos, (which we both abhor, by the way—I don’t get why people would want to have their hands look all different shades of orange for a couple of weeks until they fade completely, leaving you looking like you have a skin disease,) but in another room was something we were very interested in. 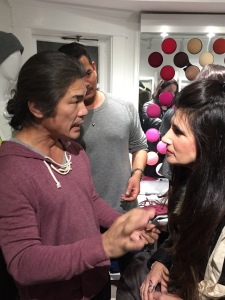 Katsumi Kasai (with Rich looking on, and a hat similar to the one I was wearing, in the upper left) talking to Alice about her beautiful hair. Photo by Karen Salkin.

As what I refer to as “total hair girls,” Alice and I enjoyed “the most unique thing”–hair consultations with Manhattan Beach hair stylist Katsumi Kasai, and his color associate, Rich. Alice said, “These guys were spot on!” And, of course, we loved that they went crazy over our tresses. Rich absolutely came to life when he saw Alice’s rich, thick, shiny hair, and told her he wouldn’t even change the color! And he’s a colorist!

He told me the something similar, saying that my own auburn color goes with my blue eyes, and to not change it, (which is good because I wasn’t going to!) And Katsumi told me the only thing he would change about my do is that he’d fix the bangs (which they’re in dire need of, so he was correct,) and agreed with me that he’d cut my almost-waist-length hair straight across, as I want to do, to get rid of the layers that someone cut in a few months ago. He explained to Alice how to make her layers work for her more, which made her tell me, “I learned so much from them in my one sitting!”

We left those men with such validation that we decided to brave the hordes on the tree-lit back deck, where the food and drinks were. The vittles were catered by Lemonade, a place I’m usually not a fan of, but the little I tried here, of what Alice said were “perfect food choices,” hit the spot. There were three flavors of lovely sandwiches (real turkey, mozzarella with tomato and pesto, and a “delicious” tapenade,) all on “scrumptious artisan” bread. I’m not allowed to eat white bread anymore, so, sadly, I was discarding one half of it. The funny thing is, everyone was doing the same! Mine is for health reasons, but, since most guests were skinny girls, we think they were doing it for weight reasons! I hated seeing so much food waste, but at least it was only carbs (which are meant to be wasted!) 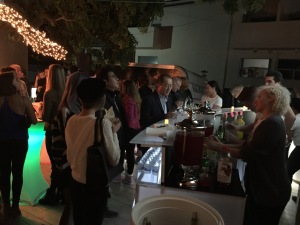 The bar on the fabulous outside deck. Photo by Karen Salkin.

There were also tiny cups of “yummy” salad ingredient combos. Alice’s favorite was broccoli and ricotta, while mine was tomato and—wait for it—avocado!!! I don’t know if that dish was a tribute to the name of the place we were celebrating, but props to the caterer if it was! We both loved having healthful fare at a fete!

Alice enjoyed the ready-made cosmos at the makeshift bar out there, and liked that they were served out of “decorative glass dispensers,” which made the drinks “so pretty and so good!”

And then on our way out, I was introduced to the general manger, Ki Chung. I told him that he has such beautiful skin, I think he should run a skin care clinic, rather than a clothing store. Maybe even next to Avocado! (And, if that does happen, remember that you read it here first!)