Spamilton, a parody of the Broadway mega-hit Hamilton, is a perfect, wonderful show. But they don’t need me to tell them that. I’m sure that everyone who’s seen it is raving about it. And, if you’re one of the lucky future audience members, you’ll be doing the same, guaranteed. (I swear—if I was staying in New York longer, I’d see it again! It’s that good.) 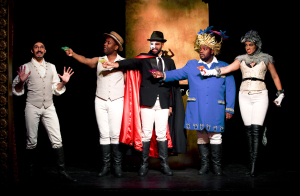 The show is absolutely brilliant.  Not only from the one mind that conceived it all, Gerard Alessandrini, but by the entire cast. Five actors do the body of the work, and there are also two fabulous surprise performers. And everyone is wonderful.

But, you know that I have to go in linear order, so here’s a thing or two about the off-Broadway theatre it’s in. It’s The Triad, on the Upper West Side, and is located…above a Turkish restaurant! I love, love, love the location! It has almost a “Joe sent me” vibe. And, once inside, the ambience is that of an old-time supper club, complete with tables-and-chairs seating, and a few banquettes. What a fabulous, different New York City theater experience! 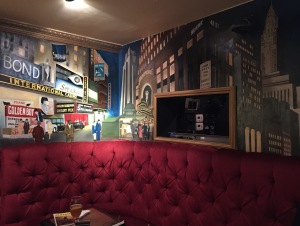 One cozy corner of The Triad. Photo by Karen Salkin.

It was totally packed when I saw the show, on what my mother would call “a plain little Wednesday afternoon.” (And I was happy to discover perfect air-conditioning during the crazy fall heat wave in New York. What a pleasure that was!)

Spamilton is non-stop energy and entertainment, with tons of surprises all the way through. The audience I saw it with was constantly guffawing. I seriously have not heard such hearty laughter in quite awhile. It wasn’t just any laughter, either; there was something special about it. I couldn’t even pick-out my own laugh; it felt like the roar of the crowd was coming out of me. You’ll know what I mean when you see it. The actors seemed to feed off the audience’s mirth, imbuing their work with what appeared to be extra gusto. The show must be exhausting to perform, but each actor gave it his or her all. (Wouldn’t it be funny if the cast goes on to appear in actual Hamilton?! They’d have to do a parody of their parody! 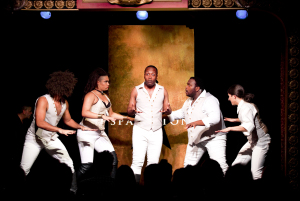 I haven’t seen Hamilton itself, but from what I understand, that musical is mainly rap after rap. I’m a big fan of Lin-Manuel Miranda, the guy who wrote that whole show, and, up until recently, was the star. But sometimes, I cannot understand what he’s saying. Spamilton is also rap after rap, but they are all very funny raps, and ones we can understand, to boot! (Miranda gave this company his blessing, it appears. Good guy. I hate to admit it, but when SCTV called my former TV show to get permission to parody moi, I was not as gracious. Perhaps that was because I knew I was a small fry, so no one would know just whom they were spoofing, which means I wouldn’t even get the credit for just being me to being with, but still…  There’s definitely a show business lesson to be learned from just the inception of Spamilton.) 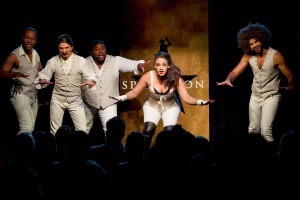 Even though this take-off is predominantly of Hamilton, it’s not the only Broadway show to get the Forbidden Broadway treatment; the cast gives many others at least a hilarious little mention in the jam-packed brief eighty minutes. One of the best things about the show is that you don’t need to be very familiar with Broadway productions. But I have to admit that it does help a bit. If you miss one or two references, though, I promise that it’s no biggie. (I totally understood what was going on, just by seeing the Hamilton numbers on the Tony Awards.) That nescience might even give you a chance to catch your breath for a moment. As I said, I’ve never seen Hamilton, and now, I may not need to! 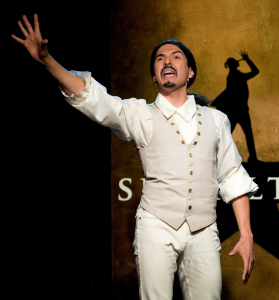 The entire cast is uber-talented; they each sing great, are able to rap, (which is not easy,) be funny, move, and, in some cases, be impersonators. I really did enjoy them all. They all have beautiful voices. I was so glad that they all got to sing, in addition to all the rapping. I have a feeling that each person who sees this presentation has a different favorite.

Mine was brand new cast member, Larry Owens. I fell in love with that guy’s voice! It’s so smooth and soothing. And the performance I saw was just his third one! That’s pretty amazing. You could not tell he was a newbie at all. As much as I totally loved all of Spamilton, if just Larry had sung for those eighty minutes, I would have been fine with that.

Dan Rosales, as Lin-Manuel, is so spot-on it’s scary. The casting director, Michael Cassara, struck gold with him! 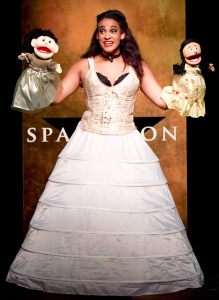 But I think that no one does more on that petite stage than Nora Schell as…every single female singer imaginable! I can’t believe that girl just graduated from college! I would not be surprised if she becomes the next Audra McDonald. Everything she does is perfect.

My regular readers know that I can’t help but point-out the weakness(es) of every production I see, so I’m sorry to disappoint those people who can’t wait for my snark—you’re not going to get any here. Oh wait—I do have one problem with Spamilton—I wish it was longer!!!

One big bonus is that it’s totally affordable, even with the two drink minimum. And I have a feeling that many of you will enjoy that aspect of the total package, as well.