Two years ago, at a party thrown by Russell Simmons at the club Greenhouse in Soho, I met Barry, one of the owners. Within minutes, my friend found-out that he had just opened a neighborhood restaurant, Via dei Mille, and off we went to try it for lunch the following day.

We loved everything we ate, especially the classy cheese platter (which I don’t know if they still serve,) the service, and the peaceful, grown-up lunchtime atmosphere. (The only problem during the day is parking, for us spoiled chicks who drive rather than take public transportation.)

So, when I was invited to their recent two-year anniversary soiree, I was happy to return. (I rarely repeat Manhattan restaurants, only my beloved Brooklyn ones, not because I don’t like them, but rather because there are soooooo many restaurants there and not close to enough time on even my month-long visits.) 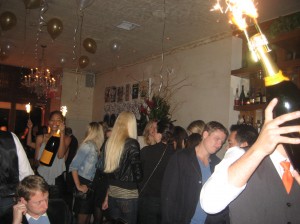 Nighttime was a whole different vibe at Via dei Mille, let me tell you! It was definitely clubby, with kind-of a Euro feel; that is, pounding beats, dark lighting, and tons of bar patrons partying it up on proseco and bellinis. Very happening.

The food was generous with free-flowing passed hors d’oeuvres like tiny smoked salmon sandwiches, rice and cheese balls, and delicious brsuchetta, for the first hour, and full-on choose-off-the-menu-with-no-limits dinner immediately after. 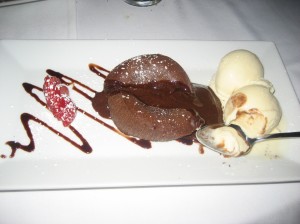 The molten chocolate lave cake, which I couldn't help taking a bite of before I snapped the pic.

My guest and I were way too full from the cocktail portion of the evening to be able to give you a real review of the breaded, bone-in, veal chops we ate, but I can tell you that the molten chocolate lave cake I had for dessert, with a glass of cold, whole milk, was out of this world. 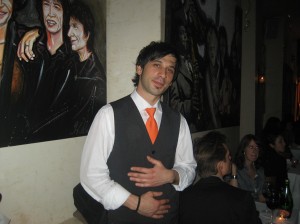 The best part of the evening, by far, for me was Sammy, our favorite waiter. And not just because he was adorable! In the midst of all the craziness, (tons of merry revelers in a relatively small space, magnums of champagne with sparklers being paraded around, and newbies arriving throughout the night,) he was just perfect: calm, collected, and most of all, super accommodating to not just me, but the entire assemblage. He’s exactly the kind-of reason that brings me back to an establishment. So, I hope we’ll both return next October to celebrate Via dei Mille’s third anniversary! Salute! [All photos by Karen Salkin.]

Reply To Restaurant i Cancel Reply