Here are my thoughts on the American Music Awards from Sunday night, beginning with the walk-ins show that was on ABC, with idiots hosts Chris Harrison and Vanessa Minnillo. My musings are in order of the whole presentation:

Chris said something to Jenny McCarthy about her “getting groped by strangers for five hours” during her New Year’s eve gig, and she replied, “Yeah, but it’s so worth it.” Is a stupid TV gig really worth getting groped by anybody??? Is anything? 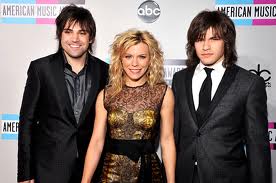 The girl from The Band Perry said their mom is their stylist. She told her daughter to have that hair??? My mother’s insisting on stupid “pixie cuts” is looking better to me now.

One time when they cut back to Vanessa, I thought that she was an old chubby woman! So I guess I would have a chance with her husband, Nick Lachey, after all!

And she kept upstaging her interviewees.

I did not know that LMFAO is comprised of relatives of Smokey Robinson and Berry Gordy!!! (Neither did the guys at my local market when I made an emergency whipped cream run in the middle of the show, and gave them that news.) Of course, I did more research on the topic and discovered that LMFAO is really just a duo who are Berry’s son and grandson. Weird. I guess Smokey’s nephew is one of the other guys on-stage with them.

Smokey was a great interview, by the way! Talking with him so many times over the years is a highlight of my career.

In singing the praises of Justin Bieber, Sean Kingston said, “The kid is amazing. He’s just a humble kid, you know, he’s charming,…” Who would have thought they’d hear Sean Kingston use “charming,” especially on the Biebs??? Now I love that guy, just for that word usage!

Chris didn’t even ask Sean how he’s doing since his serious accident! Was he even aware of it???

Every time Vanessa talked to a black person, her vernacular turned ghetto. Lovely.

I love that Chris Daughtry said, regarding his four children, “They’re amazing. Our home is so alive at all times. I love it.”

Adam Levine was actually very appreciative of what he has, which I was surprised to see.

Matthew Morrison always seems like such a full-of-himself douche.

Now to my thoughts on the actual show:

LMFAO should have opened the show with their party song. That would have been perfect, and what my producer-wannabe mind expected. [Note: I guess they were saving them for the end, which I must admit was a better idea, especially since it was so crazy!]

I still didn’t love the choice of Nicki Minaj to open the show. I actually think it was the worst opening in the history of the show.

And why does she think she has a good body??? On top of the bad body, that outfit looked like something teen-agers would cook-up for Sing. (Look-up Sing, if you didn’t grow-up in New York.)

I still don’t get David Guetta. At all!

No host for the show! What a great idea.

I’ve never been a fan of Queen Latifah. Never met anyone who is, actually. 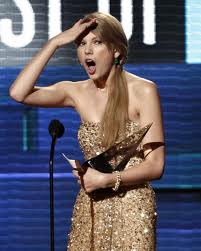 Taylor Swift is always surprised that she won! Enough with that already.

I wonder what Justin Bieber must feel like. He’s like the biggest star in the world right now, but so many people dismiss him/his music. He’s always the butt of comedians jokes. What a dichotomy to deal with.

His Xmas song, Mistletoe, is good enough, but it’s a weird song to be bopping to on-stage.

The Band Perry did great. But, again about the straw-looking hair on the girl in the group: this is how her mother styled her? Maybe the mom is secretly jealous. The girl looks like a young Heather Locklear who got caught in a windstorm.

I usually love Chris Brown’s performances, but I don’t know what they were trying to show me with this one.

Why did Jennifer Hudson change her dress from the walk-in, just to present, not perform?

Nicki Minaj appeared to be an idiot! How stupid, and rude, to wear those untenable shoes when she might win an award. So she had to have people help her out there and used up a lot of time doing so. Self-important, are we?

As the Suburgatory ladies walked out, I exclaimed, “What a horrible dress!” I meant on Cheryl Hines, but then I added, “On both of them.” And their hair and makeup looked like they were in an early morning rehearsal, not the actual show! Perhaps being actresses, and not in the music biz, they didn’t get the correct memo. Talk about your fish out of water.

That was the best Kelly Clarkson ever sounded!!! And looked! Her weirdo satyr-butt actually looked almost good in that dress. And she seemed so in charge I that number. I think it because she was actually singing this time, and not screaming.

JLo’s performance was subtitled “Take that, Mark Anthony.!” Mr. X said it was the best performance of hers that he’s ever seen, and also the best she’s ever looked. [Note: he’s not a fan of her looks.] He said her outfit “must be an entire Spanx bodysuit.” (Where did he ever hear about those???) But I thought it was a tad baggy in places. She must have been working out for months for this one performance. (Well, two, as I found-out later.)

The girl in Lady Antebellum went up to the stage to accept an award–carrying her purse!!! (I think JLo did, too, but I averted my eyes then because this is one of my award show pet peeves.)

Seeing Adam Lambert on there was a surprise because they didn’t announce the presenters at the beginning of the show, only the performers. As I always state, I love that boy!!! (Professionally and personally, too.)

The first shoes. The second ones weren't much better.

Idiot Nicki Minaj changed her erroneous shoes before her second award, but we still had to wait another hour for her to take the stage to claim it.

And she said, “I want to thank God. And Little Wayne.” Are they eligible for Best Duo or Group?

After she rambled on for ten minutes, including wasting our time with wishing a happy birthday to a homey of hers, she stated “I don’t know what to say.” Duh!

Benjamin Bratt did his intro of Pitbull well, for someone who seemed totally uncomfortable out there.

Mr. X is making me tell you that when I thought I saw Jennifer Lopez dancing behind Mark Anthony, and got excited about it, I said, “My mind starting racing. I thought they were going to reconcile on national TV!” He made fun of me for that the rest of the night.

But that Mark Anthony sure can sing!

Darn. For one minute, I actually thought we had a night off from Heidi Klum. At least we didn’t have to see Seal, too. (Mr. X looked at Heidi and said, “Oh, the Perry mom did her hair, too!” What was up with all this awful dead-looking hair so many chicks were rocking??? 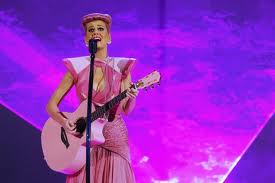 Katy Perry’s styling is like Gaga-lite. She always dons wigs and costumes, like Lady Gaga does, but doesn’t go as far. I like Katy’s outifts better.

Though the audience loved her subdued performance on the show, I felt like the act was the daughter of Gaga and Janis Ian. And, (Mr. X threw-in,) Joan Crawford. I think her strong song would have been more effective if she just came out in normal garb, but Mr. X and I disagree on that. At least she was the only one singing live thus far. And I love that when she got an award, (was it really the surprise they made it out to be?,) she didn’t do the phony thing and try to reach out and hug Heidi.

Who was Mark Anthony routing for to win the Latin award–JLo or Pitbull??? I’d love to know.

Has Beyonce had face work??? She looked a little different than usual on the satellite feed of her. Like her lips were changed or something, though I can’t imagine why she would need any of that.

And I love that her presenter, Ellie Goulding (who I’m not familiar with,) said Beyonce couldn’t accept because she’s “expecting her first child and she can’t be flying all over the country…” and then Beyonce accepted by satellite and said the reason for her absence is because “I’m in New York promoting my DVD.” Get your stories straight, ladies!

The show was mostly blah until Moves Like Jagger by Maroon 5, with Christina Aguilera, although Xtina’s mike should have been up higher, in my opinion. 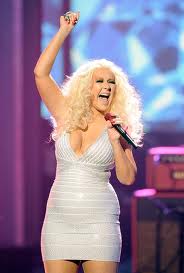 Hey, Christina–Snooki called; she wants her body back. That white skin-tight number wasn’t a smart dress for someone who’s self-conscious about their weight.

I didn’t realize that Bruno Mars is so short! But he has such a beautiful face. He could play Sal Mineo.

I don’t know what Katherine Heigl was doing there, but could her boobs have been any more fake?

The announcer intro-ed Jenny McCarthy as an “actor,” a term I hate for females. It’s so pretentious.

For will.i.am’s number, Fighting Gravity, the black-light performers who were the highlight of that act, didn’t get any credit!!! How rude.

Who was that chick standing at the mike with Jenny??? Wasn’t she just the one who brings out the trophies? Talk about a lens louse!

Back to Vanessa Minnillo: she walks really badly. Mr. X said, “what a turnoff” and “what a douche” about her in general. Too bad Nick Lachey doesn’t agree with him! (Actually, I believe my crush on him is over. No room in there with Hugh Jackman, Simon Baker, and Maksim Chmerkovskiy.)

Taylor Swift won over Adele for Artist Of The Year? Who are these voters???

LMFAO’s closing number was really fun. I always love seeing the dance group Quest with them, especially Hok of  So You Think You Can Dance fame. And that little lip-syncing-on-YouTube kid. It is truly a party on-stage.

I had just one problem with the number–most of you know that I’m as happy as the next girl (or guy) to see near-naked men, but seeing them all dance ensemble in their skivvies just made me uncomfortable. It reminded me of my days as a guest at UCLA’s many frat houses. (It’s not what it sounds like, though—they were all just upset I wouldn’t go near any of them, so occasionally, I think to entice me, though that really backfired, they would strip down and dance around. Hence, the multiple houses for me, cause I had to move on when the inhabitants of one got too crazy.)

The front row of the arena was full of weird peeps. It was kind-of uncomfortable to watch.

That’s it! Whew! Hopefully, there are no more awards shows this year. Now I can rest up for the on-slaught beginning in the middle of January. I have to go get a massage for my fingers now, after all this typing.