Trending
You are at:Home»MUSIC»MUSIC: THE FOUR POSTMEN AT GENGHIS COHEN
By Karen Salkin on July 11, 2018 · MUSIC

THE FOUR POSTMEN AT GENGHIS COHEN

After all these years, I’m still a fan of the cleverly-monikered restaurant, Genghis Cohen. But I don’t often visit their attached music venue (for no reason other than, with so many other activities in my overbooked life, music-listening is the one I have the least time for.) So I felt that I was in with the in-crowd when I went there on a recent Friday night to see my friend Noelle’s long-time pals, The Four Postmen, perform to a very appreciative assemblage. 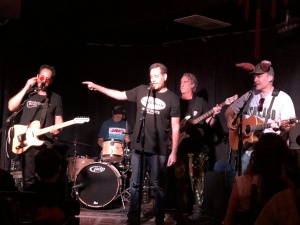 Photo by Noelle Hannibal, as is the big one at the top of the page.

I had never heard of them before, but I’ve now been told that they’re very popular in Los Angeles, so I was apparently late to the party. These guys (there are actually five of them—go figure) are all very talented.

Before I discuss them, I first must laud the venue. I was thrilled to see that Genghis is still happening after all these years. Actually, maybe even more so—I never saw the music room so packed!

And, even though I didn’t have time to eat dinner there that night, I can attest to the fact that the restaurant food still smells exactly the same as it has from Day 1, which is comforting; I’ve always loved their fare!!! And here’s some more great news—you can eat in the music club while you watch the show! I can’t enjoy two things at once, but I was really tempted by the dinners of several of the music lovers that night, (especially when I smelled the famous fried rice!) 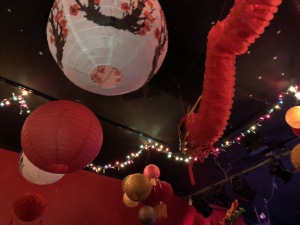 Part of the colorful overhead decorations in the music room of Genghis Cohen. Photo by Karen Salkin.

I had almost forgotten how easy an experience seeing musical acts at Genghis is. The whole thing is a breeze! They even have no-nonsense free parking right on premises, which is such a bonus in LA. And then it’s just a few steps to the entrance, and the club is right inside the door! As my former show business career manager used to say when something was so effortless: Bing, bang, boom; you’re there.

Now to the performance that night by The Four Postmen. Their music is really lively. And what a gargantuan repertoire they have! I had heard that their set was going to be an hour and a quarter, but, besieged to do so by their eager fans, they wound-up playing for two whole hours! And I have a feeling they could have gone even longer! (Well, they have been working together for almost thirty years, so it’s understandable.)

Speaking of the crowd, there was not one empty seat, which I had never seen at Genghis before. My friend explained that these guys have quite the following.

Though the quintet is made up of all accomplished musicians, I can’t tell you what their genre is. They write all their own songs, which are designed to amuse, so I guess it’s sort-of comedic folkish soft rock. (Is that a thing? Or did I just coin it?!) I have nothing to compare this style to because it’s not my kind of music at all, but I really did enjoy them. I even found myself bopping-out to a few of their tunes. [Note: In case you’re curious, my tastes go from Bruno Mars to James Bey to Adam Lambert to hip-hop to Broadway tunes, so you can see, I am eclectic; I’m just not into folk and rock.] 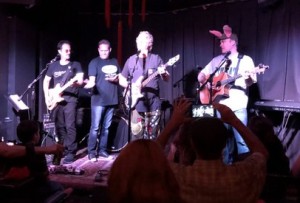 In between the numbers, the Postmen chatted with each other and the audience. They had a good little repartee going, and were all very comfortable in the spotlight. The guys appeared to be enjoying themselves as much as the spectators were. Patter like that always draws the people in and puts everyone at ease, so I appreciated that. It sort-of reminded me of what I did when I was doing my TV show, but since I was the only one on it, my cameramen subbed for bandmates! Sadly, not a one of us had musical abilities. (Unless you count the hip-hop dancing I did at the end of the episodes. But that’s a story for another time.)

Bottom line of The Four Postmen’s gig at Genghis Cohen is that, on every level, a good time was had by all. Even me!