Trending
You are at:Home»MUSIC»MUSIC: NOELLE HANNIBAL AT GENGHIS COHEN REVIEW
By Karen Salkin on May 13, 2015 · MUSIC

Over the years, I’ve spent many a happy night at the hip and delicious Chinese restaurant on Fairfax, Genghis Cohen.  It’s where Sarah Jessica Parker and Robert Downey, Jr., (when they were an item,) came timidly up to my table to tell me they loved my show!  When I had just started said TV show, Karen’s Restaurant Revue, I felt that I had really  arrived in show business by “taking a meeting” at Genghis with none other than comedy writer extraordinaire, Bruce Vilanch.  And my team and company, along with many special guests, celebrated my 100th episode with a fabulous and beautiful soirée there, thrown for me by the original owner, the wonderful Allen Rinde. 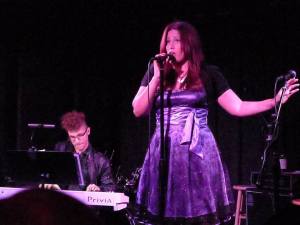 Noelle Hannibal, with Keith Harrison backing her up.

And now I can add another fun night to that list–hearing Noelle Hannibal sing in the famous Genghis Cohen Music Room.

I can’t believe I had never been there before!  How did I miss it?!  I guess I was always too busy devouring their delectable food!  [Note: I didn’t have time to dine on the night of Noelle’s performance, but just walking through the packed dining room, which featured the same old perfect aromas, made my mouth water.]

So, let me tell you what an easy experience their music venue is.  First of all, there’s always parking in that area, both in the adjacent parking lot and on the street.  Then you walk in the door, check right in, and go into the cozy room.  You can even eat and drink in there during the show!  I counted seating for about thirty, but it looked like they might possibly be able to open the area a bit, to accommodate more guests. 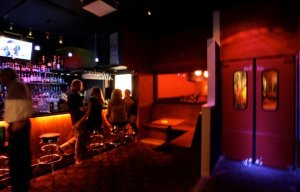 The Genghis Cohen Music Room is through the doors on the right, just beside the bar.

Even though the seating is pew-like, it’s surprisingly comfortable, with a table ledge in front of each seat.  The stage is the perfect size for probably up to a quartet of musicians, and Noelle and her accompanist, Keith Harrison, filled it up nicely, both in space and with sound.

Noelle’s set was a lot of fun. Coming to us from her adopted home of Montreal, where she’s very active in musical theatre, she mentioned that the shows she’s done in L.A. in the past are usually original music. But this time, it was all modern show tunes, which she said are her passion. They were actually mostly so modern that I was familiar with just two songs out of the whole set! And I know musicals! So, it was interesting to hear music that I probably should be aware of, and now am! 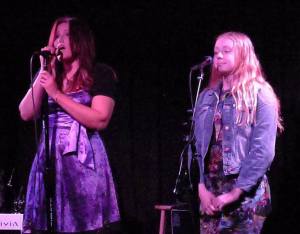 I know that her pianist, Keith Harrison, is very well regarded in the biz; Noelle told me that he was a pleasure to work with. And, she gave a thrill to her teen-age cousin, Sara Stohl, (and to some in the audience,) by calling her up to duet on For Good from Wicked. That young lady can sing!

As, of course, can Noelle Hannibal. Not only is her voice beautiful, but she “sold” the numbers in the Broadway way! That’s actually where I feel she should be appearing—in the Big Apple, gracing one of their Broadway stages! So, we in L.A. were lucky that Genghis Cohen gave us this opportunity to see and hear her. If you get the chance to hear her, either in person or on YouTube, I say go for it!

And the same goes for the Music Room at Genghis Cohen. This may have been my first visit to that venue, but will not be my last!