Last year, at this same time, I gave Le Salon de Musique, a wonderful event, one of the most glowing reviews I’ve ever written! [You can read it here: www.itsnotaboutme.tv/news/2011/04/14/music-le-salon-de-musiques]

Once I discovered it, I planned to attend every performance this season, but unfortunately, I had to miss the first few due to my sad issues in New York. But last Sunday, I finally had time to pay a return visit, and my positive opinion hasn’t changed; it’s gotten even better, if that’s possible. So, please mark down their May date, and don’t forget the new season starts up again in October.

Here’s the skinny on it: 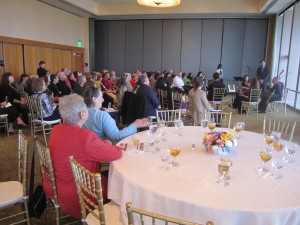 Le Salon de Musique, held on the top floor of the Dorothy Chandler Pavilion downtown, is a delightful multiple part event, my favorite kind. Especially because we didn’t even have to leave the room itself, much less the full location, to enjoy it all!

It began with beverages and mingling before the actual music program commenced, which it did basically on-time, (at four in the afternoon, which is just perfect for a salon.)

It began with an introduction by musicologist Julius Reder Carlson. He spoke for a bit, and let us know what to keep an ear out for, such as that Tchaikovsky wrote his Souvenir de Florence, which we were about to hear, concurrently with The Nutcracker Suite.

Then, the hour-long program of two pieces by Russian composers, performed by all strings, (mainly, two violins, two violas, and two cellos,) began. And it was gorgeous! The music itself was one of the shortest hours of my life! Even with back pain.

[Note: speaking of back pain, if you have it, too, perhaps you should bring a small cushion. The only drawback of the whole event is hard chairs, which I hadn’t noticed last year, but my back wasn’t as bad then as it is now. And while you’re at it, bring sunglasses, as well, because looking at the musicians with the light from outside in the background can be a tad harsh.]

And now, speaking of the lighting, I can’t wait for next winter‘s concerts because I think that, with it getting dark out early, the room with all floor-to-ceiling windows will have a wonderful vibe.

I was glad I read my own review before I went, because it reminded me to sit in the back row, so as not to torture others with my grooving. I’ll never understand how people can sit still during even classical music. The musicians sure can’t and neither can I.

Here are some random thoughts that this beautiful music brought out in me:

I was happy to see the room at the Dorothy Chandler Pavilion so full. I hadn’t realized that there were so many classy people in LA!

During the second (or was it the fourth?) Variation by Anton Arensky, (the first piece played,) I was thinking that I’d love to dance a ballet en pointe to it. Actually, I’d love to still dance ballet, period.

Musicians and composers, especially old school ones, like Tchaikovsky, are a true mystery to me!

I never advocate drinking, but as this whole event is so relaxing, and you don’t have to drive again for several hours, I suggest getting to the Music Center early and going somewhere in the ‘hood for cocktails.

My parents would love this!!!

Another bonus for the day is that beautiful music like this doesn’t interfere with your thought process; rather, it enhances mine. It always stirs up deep memories for me, or inspires scripts. Perhaps I need the musicians to come home with me so I can the finish said scripts!

Audience tip (not a reprimand this time, even though you should still always keep in mind to not wear fragrances when you’ll be sitting next to strangers, especially in an intimate setting such as this one): If you get antsy listening to music, as I always do, or just need to multi-task, why not do stomach exercises? To the music. Thank goodness rudeness, like talking and texting, aren’t tolerated at a classy event such as this.

Small, relevant digression, brought to mind by the above paragraph: my mother used to always take my sister and me to concerts at Lincoln Center. I loved the dressing-up, the super-fun lunch first in the restaurant across the street, and the overall classiness of the event, but I just always needed a visual. So, what better visual than me? I amused myself by dancing around the hallway, and admiring myself in the many mirrors! One time, I saw a really cute girl, about my age, walking towards me, and I was instantly jealous of her. I actually thought to myself, “Who does she think she is???” Then I realized it was me, in the mirror!!! I loved that I was attractive enough then to be jealous of myself!!! That’s when I became secure. For a little while, at least. Later on, as I became an older teen, and had some long-distance suitors, I sat in the audience writing letters on small pads, because they dimmed the lights only halfway. That would be totally rude at a smaller venue, such as this one at the Chandler, but no one at Lincoln Center seemed to mind.

Now, to the rest of the event: After the aforementioned quickest hour of my life, they served two kinds of champagne at our seats while we, the audience, joined in a lively discussion, led by Mr. Carlson. The assemblage asked excellent questions, especially to the musicians, who gave surprisingly in-depth answers about everything from their thoughts while they’re playing to the car accident one violinist had on the way there that day! My friend Sandy and I really enjoyed that part, (the discussion, not the car accident,) with Sandy commenting that it was great too see people who have so much passion for what they do. I couldn’t have put it better itself.

As if the day couldn’t get any better, we ended with what was, for me, the piece de resistance—the beautiful afternoon tea buffet by resident caterer Patina. Those of you who’ve been reading my columns for years, and watching my restaurant review show before that, know what a stickler I am for this repast, and they did it really right here, with all three courses laid-out correctly. 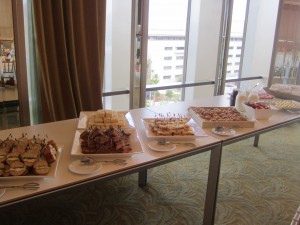 First up were finger sandwiches, all four varieties hefty enough for this meal to double as supper, which the term “high tea” actually refers to, for those of you who insist on using it the wrong way. There were mozzarella in pesto sauce on French bread, curried chicken salad, salmon on brown bread, and the most special one—their version of a BLT.

Next on the table were two kinds-of scones—cranberry and the even better, and my personal fave, chocolate chip, which so many tea rooms just don’t think to have. I applaud Patina for serving Devonshire cream, which is the perfect topping for scones, but they also had whipped cream for the uninitiated. There was raspberry jam, as well, (which is what goes on top of the cream,) and they were all presented in tall mason jars. Loved it!

Lastly, there were two desserts, a mango-lime tart and a mini eclair with pink frosting. I’m happy to say that I eat neither of those, which was just fine because I was having such a great time with the sandwiches and scones, (and tea with honey and cream, of course,) that I wouldn’t have had time for them anyway.

Add to all this gorgeous spring flowers on every table, and intelligent company in the room, and you have the perfect event.

Be sure to check their website for their May program. Hope to see you there!