Last week brought the television debut of a very interesting documentary, Quiet Storm: The Ron Artest Story. Since I rarely have time to watch TV, I would have missed it. But, happily, one of my good friends invited me to the LA premiere, which was fabulous. And educational. 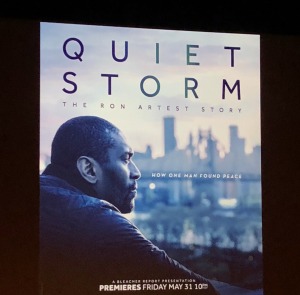 In case you’re not familiar with Ron Artest, he’s a very colorful retired NBA player, who won a championship with the Los Angeles Lakers, but was perhaps even more famous for his highly-publicized shenanigans. Watching his on-court antics, everyone, (including me,) always said that he’s “crazy.” But I’ve still often stuck-up for him, not even knowing that he had legitimate mental health issues. I just often found him to be amusing.

This film premiered on the last day of Mental Health Month because it deals with how therapy helped him develop techniques to deal with his situation, which is where the “educational” aspect of it comes in. (He even thanked his psychiatrist when he won a championship! Who else does that??? Although many should. Just sayin’.) And, because Ron is so funny, and honest about himself, it’s easy to watch.
The event was at one of my favorite private theaters in Hollywood, and I’m thrilled to report that most people knew to dress-up for the festivities. It was one of the best-looking crowds I’ve been a part of since my club days! 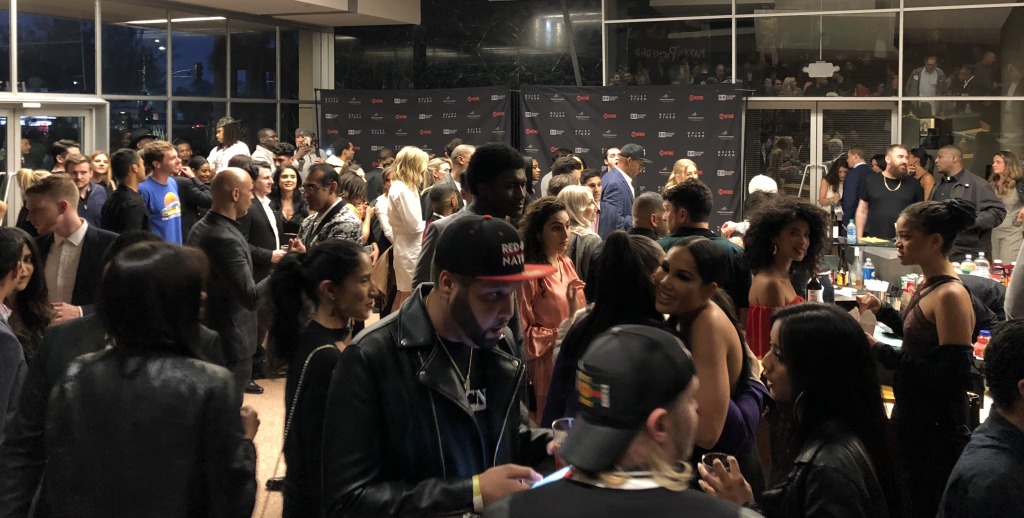 The assemblage in the bar area. Photo by Karen Salkin.

The evening began with a lovely reception in the double-decker lobby area. Many people were the most interested in mingling in the big lit-up room with the bar, but, of course, I had eyes for only the yummy hors d’oeuvres. I usually don’t acknowledge caterers, but I was happy to discover, (although, sadly for me, after the fact,) that this one was Two Peas Inc, a company who had delivered their meal plan to my house before. I didn’t even know they were also party caterers until I saw the picture I took of the display sign on one of the food tables! 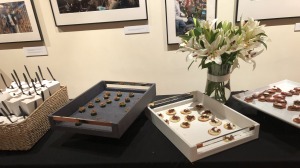 Sorry I could not snap the food trays when they were full, but they were grabbed-up non-stop! Photo by Karen Salkin.

There was the perfect combo of a quartet of treats. Three of the four were bite-sized, so that you could just pop them right in your mouth and keep on socializing. One was a cucumber poke cup, which you know my sushi-hating self shunned, but another was filet mignon slices on a mini-toast, and the third one was short rib on a crispy arepa. They were both delish. But what I loved the absolute most, and what I’m sure the vegetarians in the crowd, (like Ron himself,) really appreciated was take-out containers of a very finely chopped salad of quinoa and broccoli and a bunch of other healthful tidbits. I could have eaten ten of those! (And still can, so I’m hoping that dish will also be at the next event I’m lucky enough to eat their food at.) 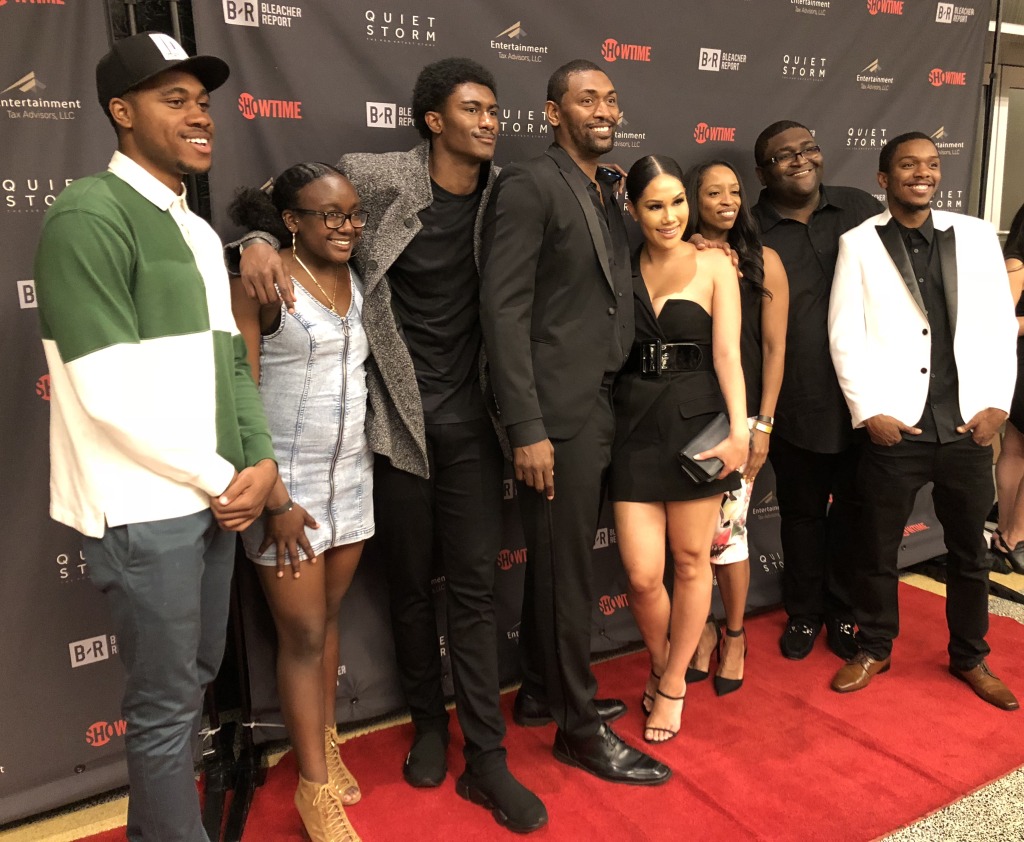 Ron Artest in the middle, flanked immediately to both sides by his son and wife, his daughter next to his son, and then assorted other family members. Nice-looking clan, right? Photo by Karen Salkin.

It was a very easy-going, non-rushed fete. That gave me a chance to chat with all different guests, and to spy a few of former pro basketballer Ron Artest’s fellow sports celebs in the crowd. When Mike Tyson walked right by me, I noticed that we were the same height! I had always assumed he was much taller than that. There was also recent former Laker Nick Young, (who was engaged to rapper Iggy Azalea, until his teammate, D’Angelo Russell, busted him hitting on another girl on video. Charming.) And Kurt Rambis, (one of the Lakers officials with whom Magic Johnson had the recent problems that precipitated his quitting the organization,) who was one of only a handful of guests who dressed like a slob that night! (He’s pretty old, so he should have known better!) 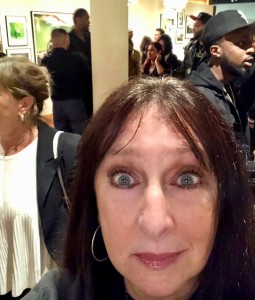 This is the closest Karen could come to a picture of herself with Ron Artest. She’s in the foreground, (duh,) and Ron is the very tall drink of water by the pole behind her! So they technically are in a picture together! Photo by Karen Salkin.

But the best part of the party was being introduced to Ron, who promptly grabbed me and hugged me. Sweet guy. (Sorry I have no real pix of us together, but he was very in-demand that night. So the one to the left will have to suffice. For now–who knows what is to come?!) Then I met his son and daughter, who both also hugged me. That’s my kind of fam!!!

After a fun soiree, we finally went into the theatre to watch the film, with opening remarks by Ron.

Quiet Storm spends a lot of time delving into a horrible incident that happened in 2004, when Ron was an Indian Pacer playing the Detroit Pistons. That incident is so famous that when I just googled “Ron Artest” to get the correct date for it, the brawl, nicknamed “Malice at the Palace,” came up instead!!! It’s a long story that I’m not going to go into here, (you’ll just have to watch the film for yourselves,) but, even though it was almost fifteen years ago, I remember it so well. 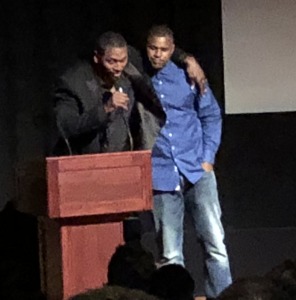 Ron Artest introducing his high school friend, Schea Cotton, who he says is the greatest basketball player from that time. Photo by Karen Salkin.

The documentary also lets us in on a big chunk of Ron’s upbringing. But, very surprisingly, it never covers that he changed his name to “Metta World Peace!” I’ve always wanted to know what was up with that. But I think the main focus of the feature is the mental health arena, so I guess they couldn’t tell us everything in just two hours. (Or maybe changing his great handle to that nutty one is how he realized he had issues to begin with! It sure gave me a clue!)

I have to say that a good ten minutes or so could easily be cut from the first section of the film, but other than that, Quiet Storm is really fascinating and informative, especially for both sports fans and mental health advocates.

After the screening, Ron thanked us all for coming, and introduced some of his fellow high school basketball stars from New York. And then he ended the evening in the most charming way—he said, “Okay, that’s it, no after-party; I’m too old for that now.” So, not so crazy after all!