Trending
You are at:Home»EVENTS»MOVIE/EVENT/PARTY: THE ROW PREMIERE
By Karen Salkin on August 1, 2018 · EVENTS, MOVIE REVIEWS, PARTIES 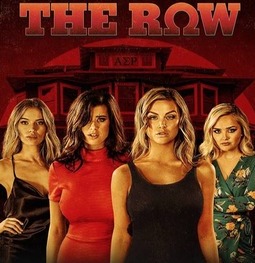 This was a fun, very LA event. A mutual friend of one of the actresses in it, Natali Yura, invited me to the premiere of a new film, The Row, and just from the image on the invitation, I knew right away that it was a college sorority slasher film.

Because of that genre, I was reluctant to see it at first, but they lured me in with the hip after-party, which was at Hyde. I’m so happy I attended, though, because the whole night was interesting, in a really good way.

One of the ladies whose hair is as long as mine, and also rocks boots with short, tight dresses! Good to see.

First of all, this was one of the best-looking crowds I’ve been a part of in a while, since my errant club-promoting days during the years of my TV show, Karen’s Restaurant Revue. The movie features mainly young, pretty girls, with a few attractive guys mixed-in, so of course the assemblage looked exactly like what everyone’s picture of Hollywood is!

And I was thrilled beyond belief to see that so many attendees dressed-up for the occasion. I did not see even one female in jeans! And shockingly, no guys in flip-flops! I wish that every event I go to would look like this! (And for once, since most of the guests were under forty, I was finally not the only girl with super-long hair, which every older person feels the need to mention to me, like I’m some unicorn!)

I loved looking at all the fashions, especially the footwear. Whenever other girls wear flat army type of boots with short fancy dresses, I feel vindicated in my frequent fashion choice, (especially since I started that trend, a couple of decades ago!)

There were so many guests who were eager to see The Row that we had to split-up into two theatres in the multi-plex. (But then I caught a lot of them spending much of the time mingling in the lobby during it. I guess the overall party atmosphere was just too much for them to resist.)

At each seat in the theatres was a curious little brown bag with a white note sealing it, which had a red sticky substance on it. A few of us finally figured-out that it was supposed to be blood, in keeping with the theme of the movie, which at least I got a kick out of. Unfortunately, the tacky material they used for the effect just made us all run to the restrooms to wash our gooped-up hands! But I, for one, really appreciated the effort. 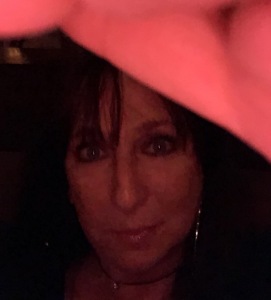 As to the actual film, I’m not going to review it because it’s far from my cup of tea. But I did stay somewhat interested the whole way through, so there’s that. The script had soooo many holes, though, but this was my first slasher film, so maybe they’re all like that. (I guess we finally came up with a topic I’m far from an expert on! So I guess wonders do never cease!)

The best part of the evening was the after-party, which was held at Hyde, diagonally across the street from the theatre. I had not been to this newer venue for the club; back in my clubbing days, it was a tiny hole-in-the-wall on the block with Greenblatt’s and The Laugh Factory. (But I was in that area in those times not so much for dancing the night away, but rather to perform weekly with my improv group, The Laugh Factory Ensemble.) For the past few years Hyde has been resurrected in that big gorgeous edifice on that same side of Sunset, but across the other street on the corner of Crescent Heights. And it’s beautiful. Much more attractive than all the hip-hop clubs that I ran. 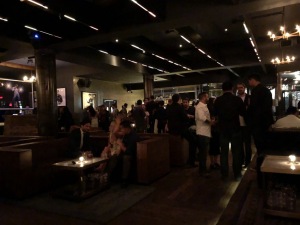 Inside Hyde. Photo by Karen Salkin.

This celebratory soiree was totally generous! There was a perennially open bar, delish hors d’oeuvres were passed all night, and there was a DJ, who—ready for this?—did not annoy me! (Once you get used to hiring your own DJs, who will adhere to your wishes and play good hip-hop all night, nothing else will usually do.)

It really did look like a great time was had by all, in every aspect of the evening. This was truly an example of what all movie premieres should be like!