Trending
You are at:Home»EVENTS»MOVIE/EVENT: TOY STORY 4 AT THE EL CAPITAN
By Karen Salkin on June 28, 2019 · EVENTS, MOVIE REVIEWS

TOY STORY 4 AT THE EL CAPITAN

I just had the best, and most interesting, experience at the El Capitan theatre in Hollywood the other day! 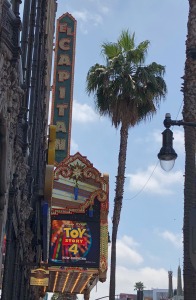 Mr. X and I could not wait to see Toy Story 4 there, because it’s the only venue at which we choose to see Disney films. There are always creative extras that no other place has, and they have the best screen and sound system, so it’s a no-brainer for us. But in addition to all that, (which I’ll elaborate on in a minute,) something really magical happened at the El Cap that day.

We chose to see the film during the day, (as opposed to a later showing,) because we figured the theatre would be less populated at that time. But we were wrong. Very wrong. As we went to pick-up our pre-ordered tickets from the box office, we both panicked when we came upon the line of many, many children. (I think most of them were from day camps.)

I had never seen so many kids in one place in my life…and I was an elementary school teacher! My immediate impulse was to see if we could exchange the tickets for another time, but I’m so glad that we stayed put because–let me tell you–those young ’uns actually made it all so much more fun. (And a bonus is that the ones in front of you are so easy to see over!) 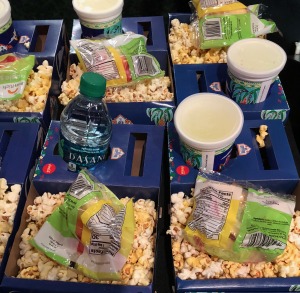 Mr. X and I loved that the theatre made special snack boxes for their young guests. They each received a perfect-sized serving of popcorn, along with a bag of sliced apples, and a small bottle of water or a souvenir cup of lemonade. (Thank goodness there was no soda.) What a healthful snack pack! I wanted one!

As to the movie itself (which is for all ages, by the way,) and pre-screening festivities, I never thought I would have a good time watching with such a big passel of youngsters, but I really did. They were all so well-behaved in their exuberance. And appreciative, of absolutely everything that the El Capitan offered! They were screaming even for the previews! I really hope they never lose that sense of wonder, as I’m grateful that I never have. (Which is one of the reasons I love this unique theatre so much!) 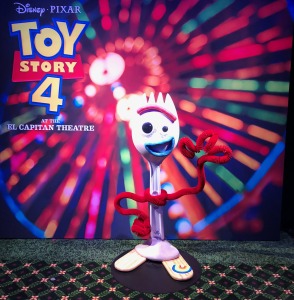 The Forky photo op in the lower lobby. Photo by Karen Salkin.

So let’s get to the memorable perks on offer. As soon as you arrive, the wall right before you walk in to the auditorium features a wonderful mural of Toy Story 4 for all the guests to take pix in front of. And the lower lobby features another photo op…with a giant Forky! I wanted to throw my arms around him for our pic! (He may mean more to you after you’ve seen him in action in the movie.)

By the way–another great move by the El Capitan is that they’re thoughtful enough to put a table right by that area, so that you don’t have to put your purses or jackets on the floor while you take the pix. And a staff member is right there to do the honors for you, so your whole group can be in the photo together. They always want to make things as easy for their patrons as possible.

You can take all those pix afterwards, if you like, because you really should aim to be in your seats about fifteen minutes before the screening time, to enjoy the entire fabulous live music pre-show. 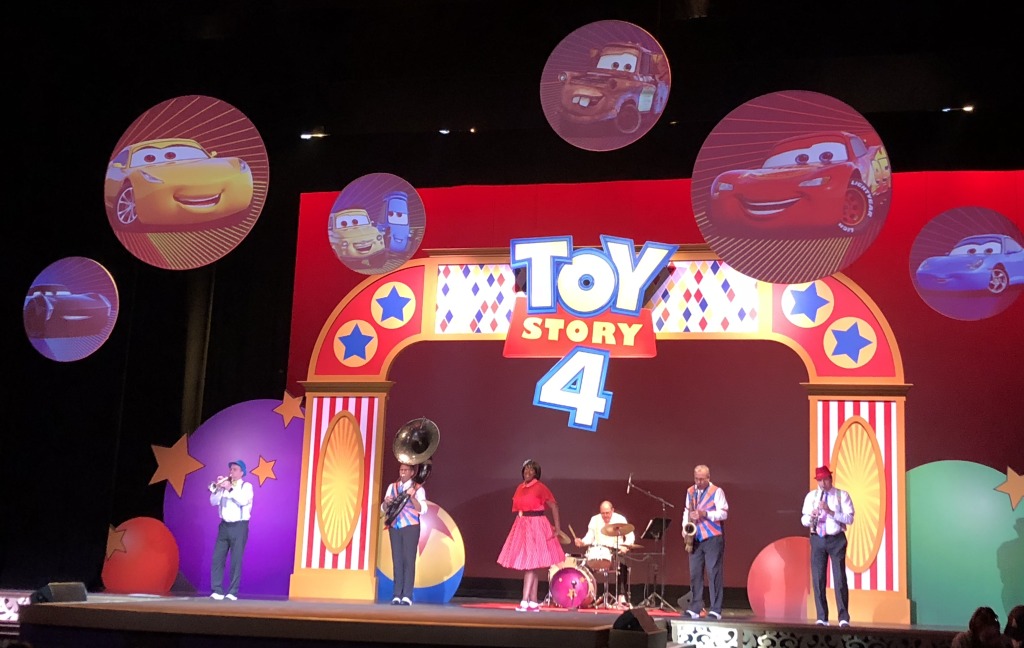 The Side Street Strutters Jazz Band. Photo by Karen Salkin.

The very colorful and talented Side Street Strutters Jazz Band performs many wonderful songs which have a tie-in with Pixar films. When they sing Route 66, the pictures in the bubbles decorating the stage are of Disney’s Cars, and when they sing Beyond The Sea, (or something like that,) the bubbles feature pictures of Finding Nemo. It’s all very clever. And fun.

The day I saw it, when the band introduced life-size Woody and Buzz to dance with them, the kids went wild!!! They even cheered when the musicians exited the stage down the aisle! 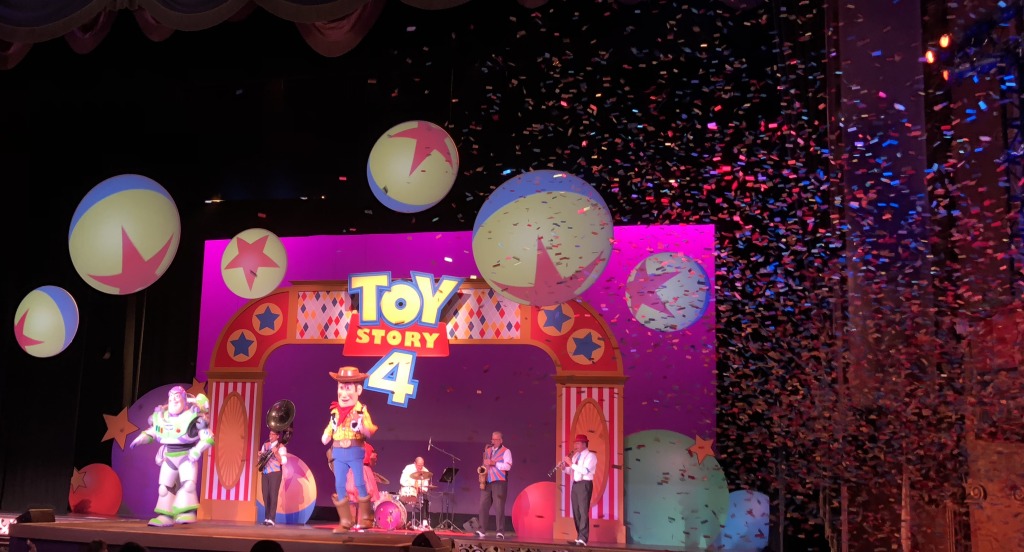 Buzz and Woody join the band, along with the surprise confetti! Photo by Karen Salkin.

And post-film, I was impressed that the entire assemblage stayed for most of the credits, until the lights came on. I have a feeling that the camp counselors must have known that there were still some cute little scenes in-between the credits. (So please remember that yourselves.) 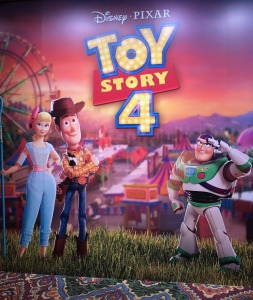 The mural in the lobby. Photo by Karen Salkin.

I was also impressed that the kids showed so much appreciation through all of it, even cheering in exactly the right places. (The counselors are lucky that I wasn’t one of their charges because, even back when I was a child myself, I would’ve been hysterical crying a few times during this film. Not from sadness but from emotions.)

Speaking of getting emotional, let’s not forget how much Mr. X and I loved the charming film itself!!! We laughed the whole time,* screamed in the comically-frightening scenes, and I was a blubbering mess at the end! (Just don’t tell the children that last part.) *[Note: Here’s a spoiler alert of my favorite line: Someone mentions the game Hide and Seek to Forky, to which he dryly says, “Sounds complicated.” OMG—how brilliant is that???]

So whether you take a day camp, your own offspring, or just go as grown-ups, get yourself to the El Capitan very soon to see Toy Story 4! It will make your whole summer!

Toy Story 4 at the El Capitan running through July 14, 2019 (My half birthday!)
www.elcapitantheatre.com