Trending
You are at:Home»EVENTS»MOVIE/EVENT: THE NUTCRACKER AND THE FOUR REALMS AT THE EL CAPITAN
By Karen Salkin on November 9, 2018 · EVENTS, MOVIE REVIEWS

THE NUTCRACKER AND THE FOUR REALMS AT THE EL CAPITAN

As a recent Facebook cartoon so truly told us, (with a Disney cartoon image, to boot!,) the second the clock strikes midnight on Halloween, Christmas begins. Nowhere was that more true than at the El Capitan theatre in Hollywood, with the special November 1st opening of the Christmas movie, The Nutcracker and the Four Realms. Of course, all the guests were thrilled– it was actually the perfect way to get a jump on the end-of-year holidays. 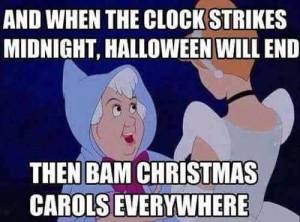 And that revered theatre is the only place to see this film! You have got to view it on a big screen, and the El Capitan’s is the best around.

Here’s a tiny digression, to illustrate the next point: A few years ago, after hanging-out with me on just three occasions, a new guy friend told me that he had become spoiled– he said that from then on, he’d always expect multiple-events nights from everyone because that was my specialty. And there’s still nothing better to me than evenings with so much happening in them.

But now, I don’t have to come up with so many fun activities in one night all by my lonesome; that’s what the El Capitan affords to all its guests…in one place! Every time we visit! 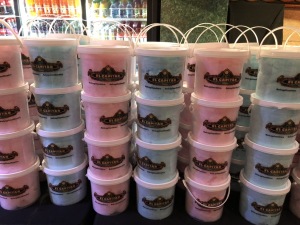 The “Fairy Floss,” in my favorite color combo! Photo by Karen Salkin.

Here’s what we first-nighters experienced this time, at the special opening event at the El Capitan. And most of it is still applicable to all the other screenings of The Nutcracker and the Four Realms for the rest of its run. [Note: We also received Fairy Floss, which is cotton candy, on our way in, and a poster of the film and a tote bag as we exited. That’s why you always want to take part in El Capitan’s opening nights!]

First of all, in the lobby, we got to view a few of the ladies’ costumes straight from the film! The little girls were going wild over them. 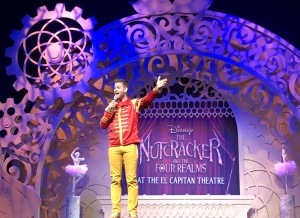 The DJ, in front of the giant music box. Photo by Karen Salkin.

Then the real fun began. (Just make sure to arrive early when you go, to enjoy the rest of the perks.) As you enter the actual theatre, your eyes are treated to a giant “music box” on stage, which the entire assemblage is invited to walk right up to, and have their picture taken on their own phones by one of the theatre’s amiable staff members. (I love that they’re referred to as “cast members.” I always expect to see someone from the films helping me out there!)

Then the most enthusiastic DJ in history plays some tunes, and entreats the crowd to sing and sway along. I swear, that guy must lose ten pounds a night!!! 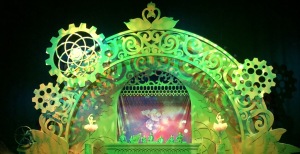 The giant music box on the stage. Photo by Karen Salkin.

When the pix and music are all done, the music box on stage gets beautifully animated, to the oohs and ahhs of the assemblage. (I swear—it was not just me!)

Then came my favorite part of the pre-screening festivities—five members of the Los Angeles Ballet performed a few brief dances from their production of The Nutcracker ballet! It was beautiful! 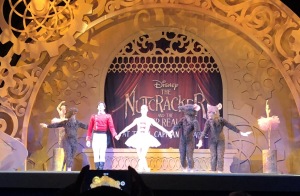 The ballet bows. (I could not get a good pic of them for you because at least one person was filming in front of me the entire time!) Photo by Karen Salkin.

And here’s the special part for all future audiences–the El Capitan Theatre is featuring different local dance companies (or schools) doing their own ballet, modern dance, jazz, hip-hop, samba, or Bollywood interpretations of The Nutcracker prior to other showings of the film! (Check their website for dates and showtimes of those eighteen performances.) I swear—if I lived closer to the theatre, I would opt to see them all!!! What a true treat this is!

Here’s one other small but important digression to try to get audiences to mensch-up already!: I’m begging people to please stop being so rude with your filming-everything mania! It’s so nice of the El Capitan to allow it, but holding your phone so high ruins it for everyone behind you! Mr. X would not take even one still shot, so as to not disturb the people behind us!!! I wish everyone in the world would start thinking of the greater good. How about doing it for the holidays, at least??? 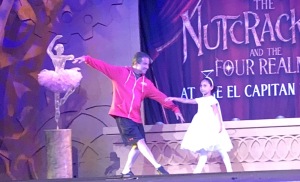 Look at this lovely father ballet posing on stage with his lucky daughter! Photo by Karen Salkin.

Whew. Glad I got that off my chest. Now back to The Nutcracker and the Four Realms at the El Capitan, which I feel is mandatory holiday entertainment. And at this theatre only, because you’ll see all the spectacular visuals in Dolby Vision Laser Projection. Those images will amaze you! I didn’t want to even blink the whole time!!!

Being a Nutcracker purist, I naturally have tons to say about the film itself. But I’ll save that review for another time. I will say that, while I totally wish it contained so much more of Tchaikovsky’s uber-famous original music from The Nutcracker ballet, I really appreciated their one tiny nod to the classic film Fantasia, which helped start it all for Disney, by being only its third animated feature. 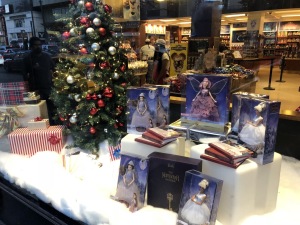 It’s already Christmas with the Nutcracker merch at the attached store! Photo by Karen Salkin.

But for now, outside of telling you that this film is so visually stunning that I didn’t much mind that it’s not the real story of the Nutcracker, I want to make sure that, with Thanksgiving coming in just under two weeks, you get your holidays started the right way, with a trip to the El Capitan to see The Nutcracker and the Four Realms. And this week-end is the perfect opportunity for that!

The Nutcracker and the Four Realms at the El Capitan running through November 18, 2018  www.elcapitantickets.com