Ahead of this Sunday’s Oscars, I share my thoughts on the rest of the movies I didn’t review for you in Part I of my Mini Movie Reviews. (And no—as some people have asked me, these are not reviews of mini movies, but rather mini reviews of full movies—the alliteration in the title just sounded better the way I have it.) In Part I, I broke-down seventeen recent films for you. Now here are my final dozen reviews of the awards season. (In case you missed it, here’s the link to my previous article: itsnotaboutme.tv/news/movie-reviews-mini-movie-reviews-of-2021-contenders-part-i.) 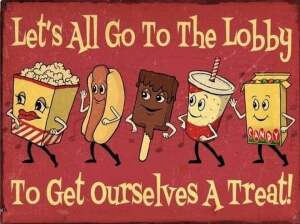 But first let me say– for the most part, this was the most unspecial crop of films in all the years I’ve been in the Screen Actors Guild! For awhile this season, I thought that maybe they all suffered from being viewed on my TV or computer, but that really isn’t the case. I’ve loved so many other movies I’ve watched on them over the years, and on lesser devises, as well. Mr. X and I have a giant screen with movie-quality sound, and we even munch on popcorn during most of the viewings, but it’s of no use; the majority of these movies are just not special.

We even found it hard to vote for the SAGs this year. Hardly any performances called out to us. And two that we adored—Andra Day in The United States v. Billie Holiday and Delroy Lindo in Da 5 Bloods—weren’t even nominated for SAG Awards!!! How is that even possible???

The best part of all of my film-viewing this year is that most of the work inspired me to do research on the topics. I love finding-out both the true stories of what screenwriters always change/embellish and the tales of how each movie got made. And sometimes even how the actors were chosen for their roles.

So now, let me share with you my thoughts on the final ones that deserve a mention, both yay and nay. 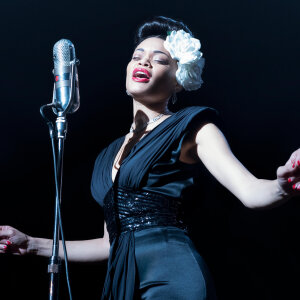 The United States v. Billie Holiday—If anyone other than the incredible Andra Day wins the Oscar for Best Actress, I will lose it! Not only was her singing as Billie Holiday as incredible as that of her own voice, but her acting chops were superb. What a wonderful surprise! There’s not one other actress who could have ever pulled off this portrayal of Lady Day. Plus, the story is interesting, (if not exactly true, on many levels—and I haven’t found much about FBI man Joe Fletcher in all my research,) and the costumes and make-up are spot-on. My only complaint is that at over two hours, the film is a tad long. I think maybe it would have gotten the attention it deserves, (which it definitely has not,) if they had cut about ten minutes off it. 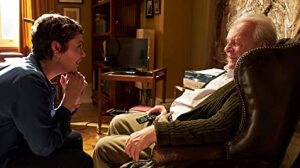 Olivia Colman and Anthony Hopkins in The Father.

The Father—Anthony Hopkins puts on a master class in acting! He actually always does, but this one, at his age, (eighty-three) is extra-exceptional. I try to never read anything about films or shows I plan to see, so I was a tad confused for the duration, but I later read that the movie was designed that way on purpose, so we can experience some of what the character is going through. Brilliant! In all areas, actually. 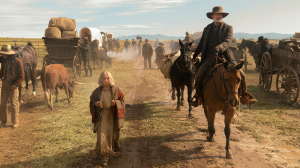 Helena Zengel (walking) and Tom Hanks on horseback, leading the way, in News of the World.

News of the World—I’m not a fan of westerns, in general, so I was pleasantly surprised by this one. While I can’t say I loved this film, I sure liked it a lot. I actually plan to see it again, now that I know where, and how, it was filmed. (In case you yourself are unaware, the answers are in and around Santa Fe, New Mexico, and…in chronological order!!! Wow. They had to do it in order because of the little girl, who definitely does look older as the story goes on.) 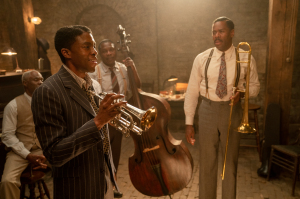 Ma Rainey’s Black Bottom—I was never once not aware that the character of Ma Rainey was Viola Davis. Or that this was a play turned into a film, which is annoying. There’s hardly any dialogue—it’s all just monologues put together. But I’m so glad that we all get to see Chadwick Boseman one more time, even though it made me sad the whole time because you could tell just how sick he was. Not an upper, on any level. (But at least, for the first time ever, Viola didn’t have any snot dripping from her nose! So that’s a positive.) If she wins the Oscar for this role, I just may be done with Oscars forever after. 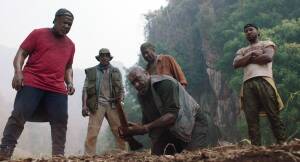 Da 5 Bloods—Delroy Lindo got screwed. Big-time! That he was not nominated for every award (or even any) for this performance is a travesty! I’ve always admired Chadwick Boseman, ever since I first him as Jackie Robinson in 42, but there’s no way he should have been nominated for a SAG Award for this one. His role was minuscule and his acting in it is what all acting should be—nothing outstanding. People on the SAG Nominating Committee voted with their hearts here, not their brains. But they should all be ashamed—very ashamed—for not giving Mr. Lindo any public love. His pain as the character was hard to watch. (I can only imagine his real-life pain on not getting any award acknowledgement for his work here.)

Ellen Burstyn in Pieces of a Woman.

Pieces of a Woman—Ellen Burstyn, who played the mother of the lead woman, should have been nominated for everything! That one scene in the dining room tore my heart out! Outside of that, I didn’t love the film. But that twenty-four minute, single-shot, one take birth scene near the beginning is something that every fan of cinema must see. And it does teach every woman to have their children in a hospital!!! 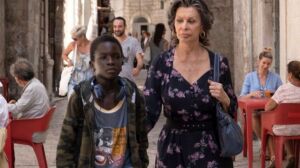 Ibrahima Gueye and Sophia Loren in The Life Ahead.

The Life Ahead—Another older woman who was overlooked by a mile this season is Sophia Loren. Even though this story of an old former prostitute taking in foster youth is not exactly a feel-good one, seeing Ms. Loren on a screen again is a glorious occasion. And she’s an inspiration to women everywhere to give up one’s vanity for things that really matter. (Okay, okay—I admit that I haven’t grasped that concept yet, but it’s still a wonderful lesson for humanity.) The acting of newbie Ibrahima Gueye is also a joy to behold. 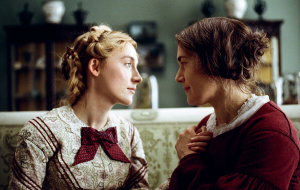 Ammonite—Thank goodness this one didn’t get any nomination for any awards! (That I know of, anyway.) It’s a totally fabricated story of a real-life woman, and seems to have been made for the sole purpose of having a major old-timey lesbian scene between two very famous heterosexual serious actresses. Well, that is if anyone can stay awake through the super-slow, almost-no-dialogued action on the way to the big climax! (Pun, which is as tasteless as the film itself, intended.)

Mank—This black-and-white film was sooooo absolutely boring that I fell asleep about a quarter of the way in and could not force myself to go back—there’s not enough time in life for this one!

Onward—This is one of the only two animated Oscar nominees I’ve seen. (The other is Soul, which I featured in Part I of my Mini Movie Reviews.) And oddly enough, it’s the only Oscar-Nominated film, period, that I’ve viewed in an actual theatre the entire year! (I went exactly one week before the lockdown began last March.) It was good enough, (though a bit repetitive at times,) with several chuckles along the way. And I got a tad choked-up at the end, over the valuable lesson about just what certain people should mean to you. What made it a bit more interesting that some other animated films is that I didn’t recognize any of the voices, so I pictured the characters as being only who they were drawn to be!

Asia—This foreign language film from Israel is soooo depressing. The two lead actresses are really good, but with soooo much sadness in the world, perhaps more in the past year than ever in the lifetime of many of us, who needs to see more tragedy, especially a fictional one? I’m so glad that it wasn’t nominated for anything.

I’m Your Woman—I swear, this one was so forgettable that just a couple of months after I saw it, (when the studio was pushing it for a SAG Award,) I couldn’t even remember who was in it!

And that is a wrap on my reviews for this movie awards cycle!