WE NEED TO TALK ABOUT KEVIN

If you’re like I am, and need to prove to your family and pals that you have good reasons to not have kids, just take them to see We Need To Talk About Kevin. The film totally validated my lack of desire for children.

This was far from a “fun” movie, but it was really interesting. [Funny—I just meant to write “interesting,” but my hands typed “depressing.” That it is, that it is.] I just feel you need to be aware of just how depressing it is going in. A feeling of impending doom filled the air in the theatre from the get-go.

Tilda Swinton. See what I mean about her stare?

I know that Tilda Swinton is an excellent actress, but it seems, for the most part, that she comes from that school of acting where, if you just stare ahead, with a blank look that could indicate any number of different thoughts, people think you’re great. Maybe I should try that and not audition for very wordy roles!

Anyway, We Need To Talk About Kevin (which I was waiting for one of the characters to say the whole time, but no one ever did,) is basically, to my mind, the 2011 version of The Bad Seed, a frightening film from 1956. [Note: to be technical, The Bad Seed, like We…Kevin, began as a novel. But then it was a play before a film, and, in 1985, was re-done as a TV movie starring my old pal, Lynn Redgrave, as the mother.] 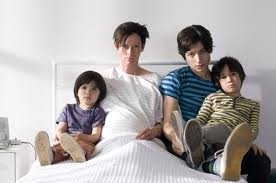 Tilda and all three boys, who, of course, are never seen together on-screen. But, notice their intensity in just this publicity shot!

We…Kevin is actually quite good and, though there’s very little dialog, and could almost just as well have had the same effect if it was done as a silent movie, it held my attention for the most part. But throughout the entire film, I kept wondering why an intelligent woman, who can see quite clearly that her son is “off” (at the very least!) from when he’s just a toddler, didn’t do something about him at any stage of his development. (I don’t want to give any of the story away, in case you’re like I am and just want to let it unfold while you’re watching.) 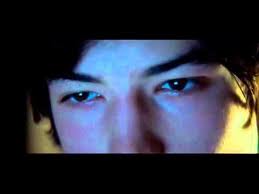 Ezra Miiler as the teen-age Kevin. Even his eyes are frightening!

As good as Tilda is in this film (I’m sure that other reviewers are calling this a “tour de force,” but I’m not so sure–see the second paragraph above,) the best part of the film is the casting of the actors who play the boy in various stages of his life. Super-props to Billy Hopkins, who cast Ezra Miller as the teen-age Kevin, and even more so, Jasper Newell as the “childhood” version. I seriously can’t figure out how Jasper, who couldn’t have been more than ten, could come up with that chilling of a performance. It was so real. (And, looking for photos of this film for this column, whenever I came upon a pic of Ezra Miller, chills ran down my spine. He should play Richard Ramirez, the “Night Stalker” serial killer, some day soon. Someone should whip it together, just to sign Ezra now.)

One small problem with the film, though, is that it got predictable, once you got the gist of it. I could give you examples of the predictability, but again, I don’t want to spoil your journey when seeing it.

I did appreciate the artistry of the film, especially the use of color, which was something I loved learning about in Film 101 in college. (I guess that was good use of my parents hard-earned money, eh?) And I also found the casting of odd-looking actors, in just about every role, fascinating. It made Tilda Swinton’s strange visage blend right in.

Somehow, I have a feeling that some parents group somewhere will have a problem with the film. But I say it’s worth the viewing. At the very least, it will make you come out of the theatre really appreciating your own life. And kids, if you have any. (And lack of them, for people like me who choose not to have offspring. This made me especially grateful for that decision, and yet another thing to remember to give thanks for next week. And always!)