Trending
You are at:Home»MOVIE REVIEWS»MOVIE REVIEW: THE IRON LADY—GIVE MERYL STREEP THE OSCAR THIS SECOND!!!
By Karen Salkin on January 26, 2012 · MOVIE REVIEWS

THE IRON LADY—GIVE MERYL STREEP THE OSCAR THIS SECOND!!!

Well, I guess this is “grande dame week” here at www.ItsNotAboutMe.TV; yesterday, we saluted May Rose Salkin and today it’s Meryl Streep. My little mo is in good company.

Here’s my short review of The Iron Lady: Give Meryl Streep the Oscar right now! And every other award out there! That woman is a phenomenon.

I’m begging my fellow actors to vote for her tomorrow for the Screen Actors Guild Award. But I’m sure she’ll get screwed this year, as usual. People, all of them idiots, think she’s won everything she’s nominated for, but in reality she’s won only two Oscars…and one’s even for a supporting role! 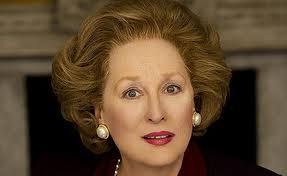 If anyone else wins this year, it will be a travesty, just like when Cher, winning for her mediocre turn in Moonstruck, beat out Meryl’s absolutely amazing performance in the heartbreaking Ironweed. Yes, Michelle Williams was convincing as Marilyn Monroe in My Week With Marilyn, and Viola Davis gave her usual excellent angst-ridden portrayal in The Help, but Meryl is in a class by herself as Margaret Thatcher. In my humble opinion, no one else in the business even deserves to call herself an actress, next to Meryl Streep. There should be no dissension that she’s the greatest actress of at least my lifetime, if not all time.

I honestly did not know that that woman at the beginning of The Iron Lady was Meryl Streep! And I went back over that part twice, to see if I could figure out just who was playing her as an old woman. It took about fifteen minutes, and tons of convincing by Mr. X, to realize it was indeed she! I’ve never seen anything like it in my life.  (The make-up crew really must be lauded, as well.)

I tried to find a photo of her as the older Maggie, but there were none to be found. I would have just taken a screen shot from my screener, but I don’t think that SAG allows even that much to be shared, and I’m all about the rules. So, you’ll just have to see it for yourself.

There’s not much else to be said about this film. We saved it until nearly the end of the screening period because we both assumed it would be boring. But, from the very first scene of just Meryl as Maggie buying milk from a grocery store, we were riveted. To Meryl’s performance—the story is not half as interesting. But the story itself did not matter in this case; we were blown away by what Ms. Streep was accomplishing. As actors ourselves, (and Mr. X being a really good one,) even we could not imagine how someone can do what she did.

Mr. X had two observations that I wish I had come up with. He said, “There’s so much life in her eyes,” just as I was being fascinated by them. He also commented that he felt that we were intruding on her life; that’s how intimate a portrait of Mrs. Thatcher she was painting.

So, even if someone else wins Best Actress, at first this week-end’s Screen Actors Guild awards, and then next month at the Oscars, please know that Meryl Streep as Margaret Thatcher gave really, by far, the performance of the year.