St. Vincent is the perfect film! It’s seriously one of the best motion pictures I’ve ever seen, on every level. It restored my faith in movie-making. 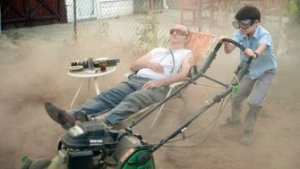 There are not enough superlatives for this film. And I saw it in an industry screening of over a thousand people, with no air-conditioning, which would usually make me think negatively of the work itself. But St. Vincent made even me rise above the sweltering conditions. (That’s actually nothing compared to the heat they were filming in during the summer of 2013, in Brooklyn. I was there at the same time, and trust me, it was almost a hundred degrees every day then! Troupers all.)

I was literally sobbing my guts out at the end of it, (not from sadness, so no worries there, thank goodness,) as hard as I was laughing throughout. I’m also thankful that the credits were long, (they rolled over Bill singing the entire Bob Dylan song, Shelter From the Storm,) because I needed all that time to compose myself. So, needless to say, this is perhaps not a first date film, unless the guy loves a blubbering, mascara-dripping mess of a girl.

I don’t want to ruin the story for you, so I can’t tell you the plot or storyline. You can always look them up, if you like. But I’m so glad I knew absolutely nothing going in. I just let it unfold.

This is the best Bill Murray has ever been! (Even better than in one of my favorite films of all time, What About Bob?) No fooling. He’s perfect in St. Vincent! As is the new little boy, Jaeden Lieberher; he’s beyond belief. Absolutely no pretense in his performance at all.

And Melissa McCarthy is excellent as what Bill Murray called the “straight man,” while Naomi Watts is almost unrecognizable doing a comedy role. (I’m so glad Bill pointed-out the flipping of what the two “girls,” as he called them, usually play, when he spoke after the screening. More on that later.)

I honestly can’t believe that this was written and directed by a first-timer! Theodore Melfi did both his duties with aplomb. Wait—aplomb? No, so much more than that. His screenplay is downright brilliant. I guess that’s why he attracted three such major stars to it!!! (And Terrence Howard and Chris O’Dowd, too. The casting person should be commended, as well.) Ted said he based Bill’s character on his father-in-law, and much of the premise on something that happened with his niece. I actually got choked-up again just hearing him speak about them. 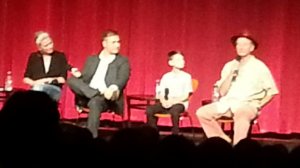 The panel, including Bill Murray, far right, and Jaeden Lieberher next to him. Photo by Alice Farinas.

There were some more interesting post-screening happenings. First, I hadn’t realized that the guy who would moderate the Q-and-A was sitting across the aisle from me during the film. When he started the panel discussion, he referenced my laughter and sobs!!! Oysh.

The second note is about how nice Bill Murray was to everyone! He stayed well past his appointed time there, and spoke with all the people who rushed the stage to try to meet him. As he left up the aisle, I watched him literally shake the hand of every single person who offered it, saying, “Nice to meet you,” to each one. I had always heard iffy things about him, but I witnessed these kindnesses with my own eyes, so that’s what I’m going by. And he wasn’t even supposed to be there; he filled-in when Melissa came down with the flu. I’m thrilled he was there because–he’s really funny!

I must share some of their bon mots with you. Bill made a very true, profound statement: “It takes a lot of energy to make a real piece of crap, let alone something that you’re proud to say you’re a part of.” And we all loved that he deadpanned that St. Vincent is a “chick flick.”

But the little boy, Jaeden Lieberher, got the biggest laugh of the night when he answered the query of how he did what he did on film by saying, “I tried to do whatever they said.” Love that kid!

So, final words on St. Vincent: go see it, immediately and repeatedly! Period.