[Note: In this week’s run-up to the Oscars, I planned to dedicate all five days to movie reviews.  But then I realized that, since I had the privilege to serve on the Screen Actors Guild Nominating Committee this year, and therefore finished seeing all the important films ages ago, (most even prior to their releases,) I’m so done with the topic.  I’ve already reviewed many of them earlier this season, so if you missed them, just check-out my archives to the left of the front page. They’re all in the Movie Reviews section. Duh!  But I will review a couple of more this week, to add to the mix.  And please be aware that unlike most other movie critics, I’m not here to give you my “Intro To Film” analysis; I’m just letting you know how good or bad I think a film is.]

I think that perhaps I let the surroundings of where I saw Nebraska influence me.  It was a private screening at Soho House, complete with pillows, blankets, and hot chocolate!  The coziness made me think I may have been enjoying the movie more than I would have at a regular theatre, but others said it had the opposite effect on them; about half the audience fell asleep!!! 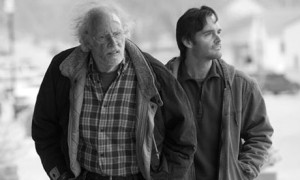 Oh yeah, did I mention it’s in black and white?

I do have to admit that it’s a slow one, but, in my opinion, so worthwhile.  And I’m far from an Alexander Payne (the director) fan.

I don’t know what anybody else thought this movie was about, but to me, I think it’s about a son who is perhaps even better to his father than I was to my mother, which is really hard to be.  So it really got to me. [Note: I did offer to take my little mo on many a road trip, even to my most hated place, Florida, so I really identified with that part, big-time. But she wasn’t nutty, as the father in this film might possibly be.]

And the cast couldn’t be better.  I don’t know why, but I’ve never enjoyed Bruce Dern, but he was great in this one; actually, just about perfect.  And it’s so great to see a journeyman, or more accurately, journey woman, actress (the eighty-four-year-old first-time Oscar nominee June Squibb,) getting her just desserts later on in life.  Gives us young ‘uns some hope!  (Mr. X always says my big show business success, much more than even in the heyday of my cult show, Karen’s Restaurant Revue, is ahead of me, and I say that I just hope it comes before I’ll have to play a Golden Girl–Sophia!!!  (The oldest one, for those of you who don’t know that show.)

At a recent little theatre show I attended, I sat to the guy who played the older son, Bob Odenkirk, and he was a nice regular guy, so I was happy to see his success, as well.  (You can read about the encounter here:  itsnotaboutme.tv/news/celeb-sightings-celeb-sightings-30-december-2013.)

But, the biggest revelation to me was Will Forte.  I definitely identified with his “good child” character, so that was part of it, but it was also seeing a guy who was a laugh riot on SNL do such a great job with a semi-straight (or at least dry humor) role. Many kudos to him.

And that’s all I have to say about Nebraska. It’s definitely worth seeing; just be sure that you napped beforehand.