Foxcatcher is a very interesting, although horrible, true story. But the film is almost awful, shedding no light whatsoever on what really happened.

I have no idea what my impetus was, but a couple of years ago, I researched the story of the weird relationship between the wrestling Schultz brothers and crazy multimillionaire John du Pont. I had as many questions as du Pont had dollars, about how everything in that strange story came to be. But even my several hours of research failed to answer them all. 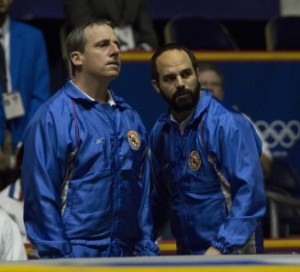 So, when I was invited to a screening of the new film about it, Foxcatcher, I was more than interested. But, within about one minute of it starting, I was already disappointed. And that feeling only snowballed during what felt like the next ten hours!

Before I get to the many negative points, here are some positives. You’ve got to check-out the photos of the real trio to see how perfect the casting (by Jeanne McCarthy) really is! Channing Tatum and Mark Ruffalo as Olympic champion wrestlers, Mark and Dave Schultz, and Steve Carell’s weirdo du Pont look as close to the real guys as we’re going to get.

And, although I know that everyone will say how wonderful Steve Carell is, (and he is,) the real winner is, as usual, Mark Ruffalo. That guy is always a revelation to me. Just the one small scene where he’s speaking to the camera for a documentary about du Pont is brilliant. Young actors should take a lesson from him. Heck, all actors should do that!

But the choices of both Vanessa Redgrave, (who was perfect, as always,) as du Pont’s mother, and Sienna Miller, as Dave’s wife were downright odd. There was no need for such famous actresses in those roles, nor reason they would even want the parts. Vanessa had one scene, with maybe three lines, and Sienna was basically background in a few scenes. She didn’t even have any close-ups!!! I don’t get it. Those parts should have been given to basic members of SAG who need the work, for goodness sake.

In case you don’t know the true story of this crazy, depressing tale, I don’t want to ruin it for you. So, small spoiler alert: look away for just this next sentence. But someone is shot in the film, and it should have been the editor!!!

Foxcatcher is soooooo slow!!! It was all I could do to stay awake! There are many places where there’s about thirty seconds between each line! Perhaps the director needed to first see the original The Thing, to learn how people talk in real-life. I could have easily cut an hour off it!

And the lighting is way too dark. What was cinematographer Greig Fraser trying to accomplish with it?! I kept checking my glasses to see if I had by accident put on my sunglasses! Under-lighting like this is not only hard to look at, making it bad for the eyes, but it puts the audience to sleep. That, combined with the plodding direction by Bennett Miller, makes a snoozefest of what should have been a riveting film.

The writing, by E. Max Frye and Dan Futterman, isn’t much better. The movie doesn’t show why the relationship between Du Pont and the younger Schultz, Mark, soured. I kept asking Mr. X if I had fallen asleep and missed something. I had to come home and research it all over again to find out what the story really was. (Mark Shultz just wrote a book of the same title, so I’ll probably read that.)

Here’s just one little example of the confusion in this film: There was a too-long scene of Mark Schultz cutting du Pont’s hair with a shaver. The hair-do didn’t come out looking any different that it did before, and there seemed to be no reasons for that scene. Upon researching it, I found-out that that was a true incident, but it was because Mark was nauseated by John’s red “Ronald McDonald hair” that was caked down to the roots with dandruff!!! Mark did it so he could actually look at the man! But, we saw neither the red hair nor the dandruff, so why have the scene? It was for naught!

Everyone in the industry loves Steve Carell, so I have a feeling he’ll be nominated for several awards this seasons, at least a SAG and a Golden Globe, both of whose voters are more easily swayed by personality, rather than performance. And he does do an admirable job, playing far from his usual schtick-y characters. I have to see the rest of this year’s film crop to decide if he deserves anything for myself. But I do know that I, at least, deserve my hundred and thirty-four minutes back!

Now, to the post-screening Q-and-A we got to see because it was an industry event. The guests were Tatum, Carell, and director Miller, who did most of the talking, to the chagrin of most in attendance. But, shockingly, this was the least entertaining Q-and-A ever!!! It was a real snore. The assemblage seemed desperate to laugh, but had few opportunities. These guys are so glib on talk shows, and here they got all unnecessarily serious and boring. I don’t get it.

The last note is this: The moderator is a woman who always asks the actors how they got their SAG cards, which is a great question, with usually interesting answers. I really hate when these speakers “don’t remember” how they got their SAG cards! That’s so obnoxious. We all remember! Unless you’re a hundred years old, and in the guild for eighty years!!! Channing Tatum got his not that long ago. Yet, both men weren’t sure how they got theirs. So, these two, whom I was really looking forward to hearing, were almost as disappointing as the film itself.