This is my third favorite film of the year, (right behind The Book Thief and The Wolf of Wall Street,) and the only one I saw twice (because I wanted Mr. X to see it, and I wanted to watch him watch it, and enjoy.) The interesting thing is that I enjoyed it as much seeing it in my living room as just the two of us as I did when I saw it at the Directors Guild Theater with six hundred of my peers! Although usually the latter atmosphere lends itself to more enjoyment than the former situation, it was really equal in this case, which says a lot about just how good American Hustle is. 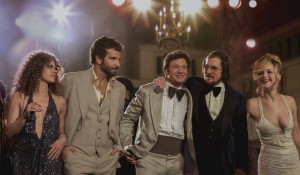 This film had us chuckling right off the bat with this disclaimer sign before the action even started: “Some of this actually happened.” That’s so much better than the usual disclaimers which say things along the lines of, “While this film is based on actual events, blah blah blah,” in little letters at the very end of the credits.

It turns out this story is based on a famous FBI operation in the late ’70s. I didn’t know anything about Abscam, so of course I googled it the second I got home from the screening. (I suggest you do the same, because it’s fascinating, but not until after you see this film, see you can just enjoy the semi-fictional story in front of you on the screen.)

In my new efforts to keep my columns shorter this year, that’s really all I have to say about American Hustle. You don’t have to know much more than that going in. I recommend it to one and all; there’s nothing really offensive about it, (except for possibly Amy Adams constantly-plunging neck lines, in some people’s opinions,) there’s a surprise cameo that elevates the experience, and it’s really a lot of laughs. And it’s really a pleasure to see Christian Bale in an amusing tale, especially if you’ve already seen him in Out of the Furnace this season.

I have a feeling that Mr. X will watch this one as many times as he’s already seen Goodfellas, Casino, and The Godfather, which puts American Hustle in great company. As a matter of fact, as soon as it ended, he mentioned something about having to see it again. And believe me, those are words I wished I had heard him say when he watched my show!

[Note: There was one annoying thing about the screening I saw this film at, and it had nothing to do with the film itself. I guess someone behind the scenes thought he or she was being clever, and got Mad Men creator Matthew Weiner to moderate the post-screening Q&A. Here we had the star power of Amy Adams, Bradley Cooper, and Jeremy Renner on stage to talk about their experiences shooting it, and writer-director David O. Russell to share his valuable insights, but most of what we got was Weiner’s thoughts on the film! That wasted so much of our time. And David O. Russell was so excited, (his excitement was warranted as this was the first industry screening of American Hustle,) that he did most of the speaking for the panel. There was a women on it who played a small part in the film, and they virtually ignored her except for one short-answered question posed to her by Russell. We all stayed to hear what the stars of the film had to say, not to hear some outsider gushing over it, so the Q&A was a big disappointment.]