Trending
You are at:Home»MOVIE REVIEWS»MOVIE: FROZEN 2 AT THE EL CAPITAN
By Karen Salkin on November 26, 2019 · MOVIE REVIEWS

FROZEN 2 AT THE EL CAPITAN

What an absolutely delightful morning I just had at the El Capitan movie theatre in Hollywood!

I chose to see Frozen 2 at their special early morning Breakfast Pajama Party on opening day. When my alarm went off at 6AM, (to have time to change out of the pajamas I slept in to don my dress-up PJs!,) I regretted that decision for a few minutes, but when I got to the theatre and saw how exciting it all was, I never looked back. The entire experience was a blast!

I brought my friend Nikki and her four-year-old daughter Moxie, and I cannot tell you which of our trio was most enthralled by it all. We all enjoyed every moment of it.

Some of the special parts of the PJ Party were just for that day, (but the El Cap does it for other film openings, on occasion, so pay attention, so you can attend, too, next time.) But a lot of the goings-on are for every showing of Frozen 2 at the El Capitan, so you’ll still have a great time whenever you go.

First of all, since this was a Pajama Party, it was really fun to wear them out in public like that! And I would say that every single child, and at least three-quarters of the grown-ups, showed-up in appropriate attire, including about half the dads!!! I loved seeing fathers who are so willing to entertain their kiddoes! It also made for more mingling than ever at a movie event; we all kept telling each other how cute we looked. I wore my colorful crayon nightshirt, to entertain the kids, while many people were rocking actual Frozen attire. 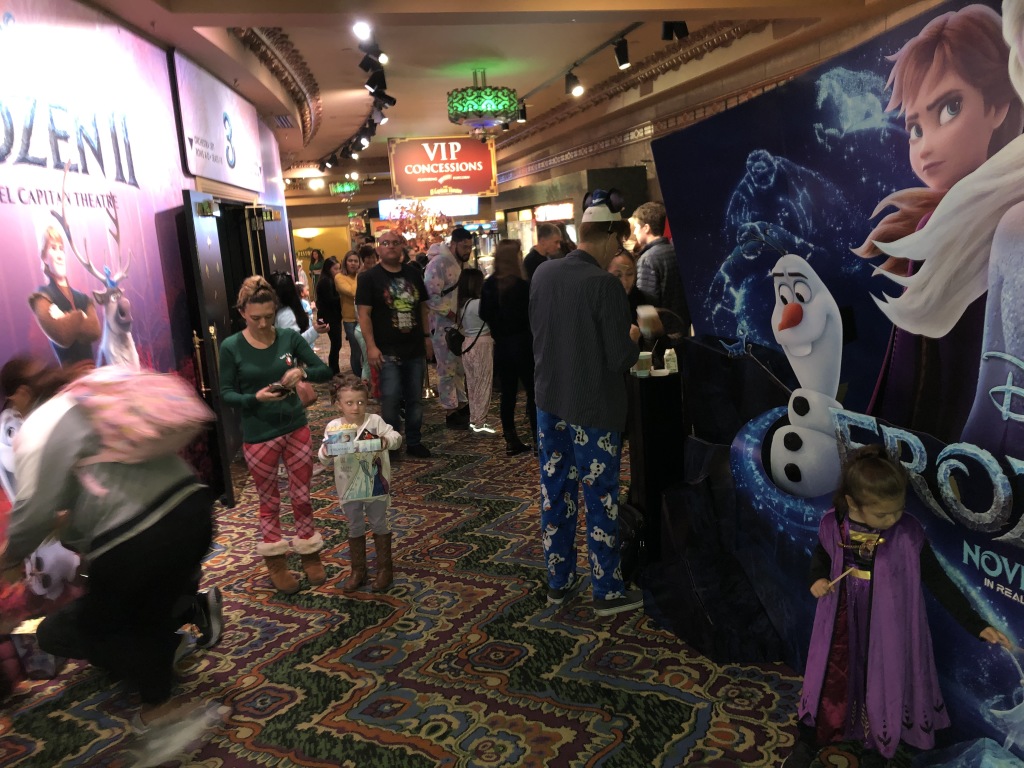 Just a few of the PJ-attired guests. Photo by Karen Salkin.

As soon as we entered the theatre, we were treated to a vibrant Breakfast Cereal Bar. (I was glad to see that it was not just a cereal bar, like a granola one that you eat for a snack, but an actual cereal buffet!) Every guest got to choose a bowl of his or her favorite cereal from seven delicious options. There was something for everyone, even uber-picky moi! I was happily introduced to a brand of chocolate cereal that I had never even heard of before, but will now eat all the time—it was that delish! We also had a choice of milk to put in it: whole, 2%, or soy, which was very conscientious of the organizers.

At the end of the Cereal Bar were coffee, Winter Dream tea, and hot chocolate, which turned-out to be one of my Top Five hot chocolates ever.

For the entire run of Frozen 2, there are a duo of fabulous photo ops in the lobby. First up is a beautiful mural of the sisters, with a staff member on hand to take the pix for you. And if you’re time-constrained before the movie, you can just do it after. And there’s also a giant pop-out of the entire cast at the other end of the lobby, so don’t forget to mosey on over there, as well. 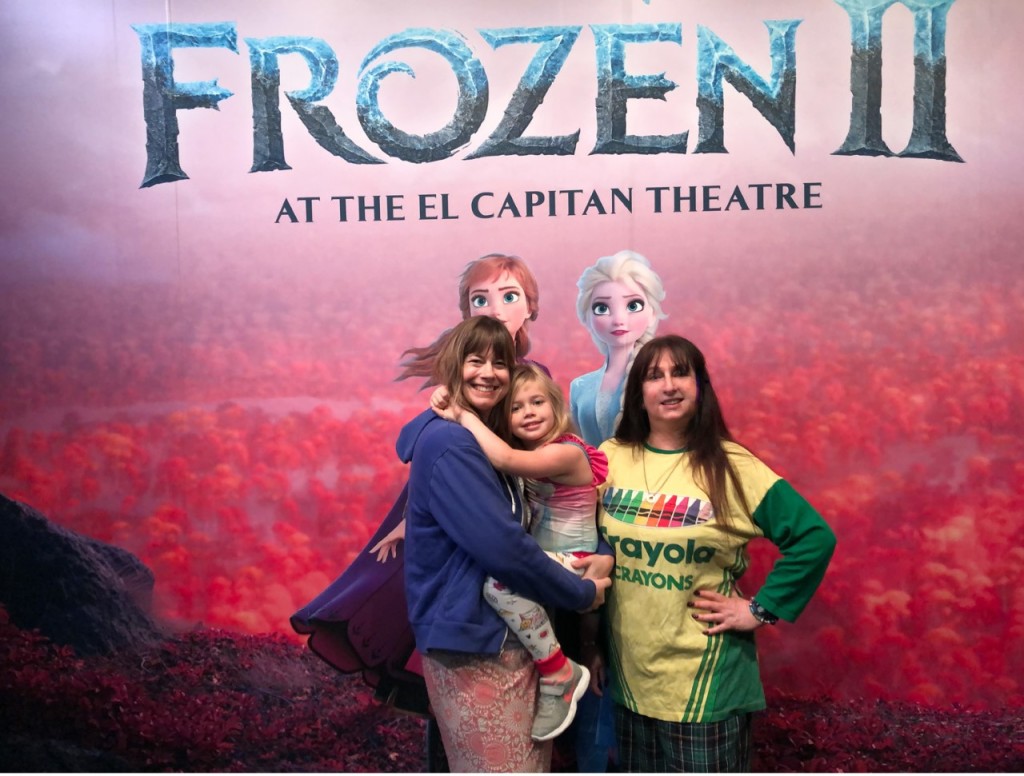 (L-R) Nikki and Moxie with Karen Salkin. Doesn’t that look like Nikki’s hair is flaring out in the back. But it’s Anna’s hair! And doesn’t it look like Karen’s hand is very long behind Nikki? What a fabulous pic of optical illusions! Photo by El Capitan staff.

The fun always continues when you get to your seats at the El Capitan. They invariably have something special on tap for their guests. For Frozen 2, there’s a light show with Anna and Elsa live on stage before every screening.  And there’s a surprise showering of leaf confetti, just like the falling leaves in the film.

Since this was the opening, resident DJ Sean Patrick played tons of upbeat tunes before all of that. (In his PJs, of course!) And then a dozen or so kids went up on stage to show off their amusing dance moves. I give them all credit for being brave enough to get up there. 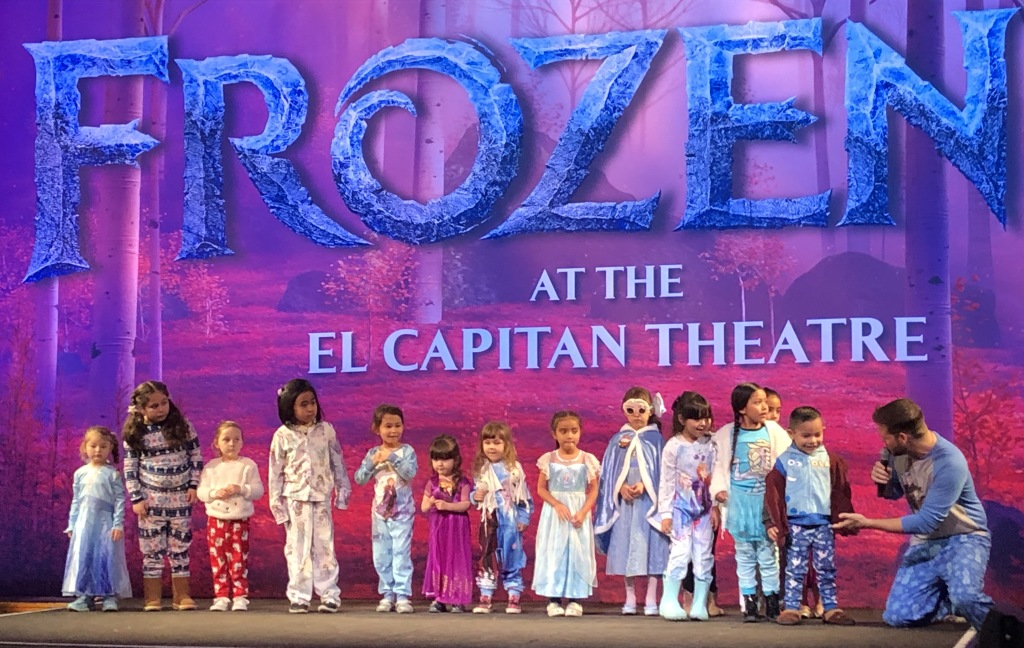 One of the best things about choosing a daytime showtime is that I love hearing the laughter of children, and there was plenty of that for Frozen 2. Is there any better sound in the world? I think not.

One of the characters in the movie makes this comment about something early on: “You’ll be charmed.” And then a little while later, one of them says, “It felt so magical.” Well, those are exactly the feelings of the entire assemblage for this whole wonderful day at the El Capitan!

Anna and Elsa on stage at the El Capitan, enjoying the light show. Photo by Karen Salkin.

As to my review of the actual film, I loved it! It’s so much better than the original. I could actually see Frozen 2 again! (But only at the El Capitan, of course.)

Here are just a very few of my thoughts on it: The facial expressions on the characters are fabulous, especially on Anna and Elsa when they are little girls in the beginning of the movie. They’re adorbs! And my best friend in life, Froggy, (about whom I’ve written often,) was originally blue, so Bruni, the little salamander, (who stole the show for me,) totally reminded me of him. And when one of the characters commented, “Who knows the ways of men?,” every woman in the audience laughed knowingly. 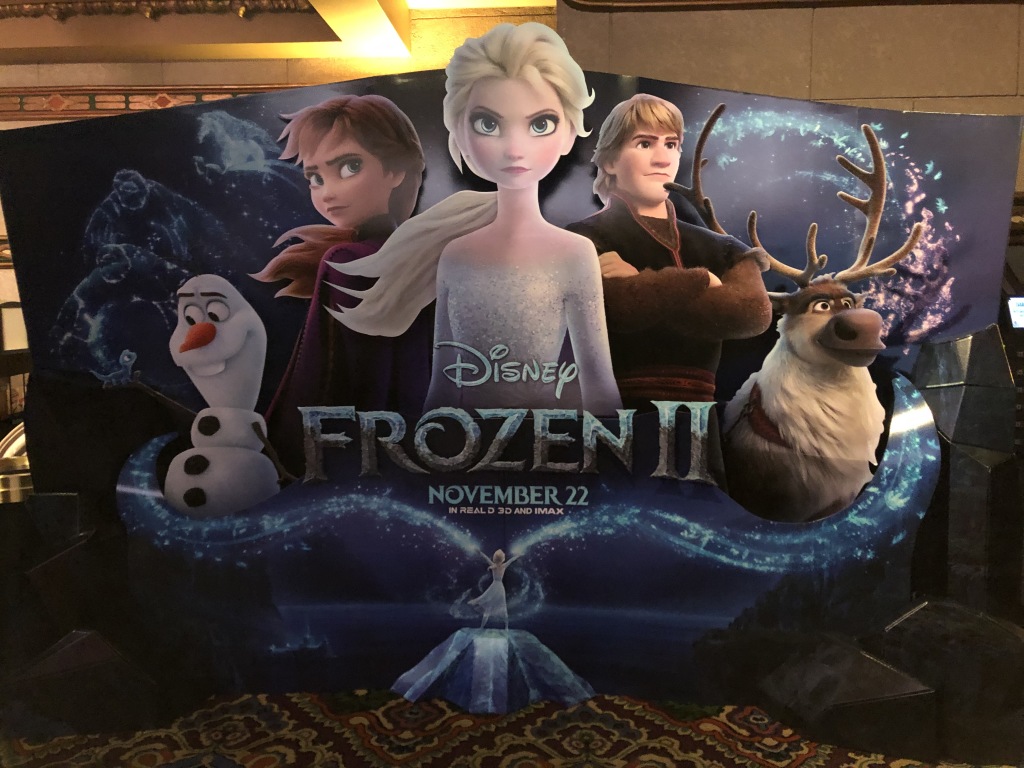 The other lobby display. Photo by Karen Salkin.

My young pal, Moxie, was mesmerized by it all. Her mom told me they had a blast, and that she herself thought the movie was spectacular, which she was a bit surprised by. I join them in all of those sentiments.

So, if you have a young fam (or pals,) this is the perfect holiday activity to do with them, no matter which showing of the day you go to—morning, afternoon, or evening.

And I have a feeling that from now on, whenever the El Capitan does a Breakfast Pajama Party for a movie opening, you will find me there!

Frozen 2 at the El Capitan running through December 15, 2019
www.elcapitantheatre.com