Trending
You are at:Home»Uncategorized»MISCELLANEOUS:FRIEND THANK YOUS
By Karen Salkin on May 2, 2010 · Uncategorized

IT TAKES A VILLAGE…

I actually started writing this “thank you” column a month ago, but decided to wait until a recent bad episode was over so I could thank everyone ensemble. I definitely didn’t want to leave anyone out.

About six weeks ago, Mr. X and I suffered a shocking and heartbreaking death in the family. Every day, aspects of it kept getting worse. And on top of it all was our ongoing three-months-and-counting ordeal of my severe back problem, about which we needed to decide on surgery or not.

Since February 2, Mr. X had been waiting on me hand and foot. It was extremely difficult for me to stand, walk, and move in any way. If a pen was a half inch from my fingertips, I had to call him over to give it to me. Not fun for either one of us. (Especially HIM, I’m sure!)

And then, the awful news from Toronto, and he had to be off to take care of everything there, leaving me alone and in pain, and taking care of our precious little Clarence, who at his (knock on wood) advanced age needs lots of attention, due to his failing eyesight and hearing. But he’s still spunky and adorable, thank God! 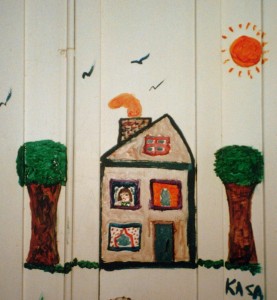 A picture of my house, with me waiting inside for my "Meals On Wheels," painted by...ME! I created it on the side of a former friend's house, before it was being torn down, several years ago, and thought it was an appropriate visual for today's column. Do you think that "Lost" based its Smoke Monster on my chimney emissions?

I totally supported Mr. X, and knew he had to be away for a month or so, and told him not to worry about me; though I still wasn’t able to drive, I have lots of friends, and, thankfully, a deep bench. But I was actually worried myself. I knew that I have a lot of pals, but Los Angeles is far from Mayberry RFD. We don’t see our neighbors or bring casseroles over during emergencies. I seriously don’t think any of my neighbors have actually noticed that no vehicle has left our garage, and that they’ve seen hide nor hair of Mr. X! This isn’t exactly Rear Window!

So, here’s the actual purpose of today’s column: to say that I’ve been overwhelmed by the support and help I’ve received from my friends. It actually makes me cry. I knew that without Mr. X here, in my current condition, I would need some help. At the very least, I needed someone to bring me food every day–I call it “Karen’s Meals On Wheels.” I can’t stand-up long enough to cook, and don’t how anyway. (Except that I make a mean chocolate chip pancake!) And Mr. X has been doing the grocery shopping, too.

So, though it killed me to do this, I sent out a group email telling my pals the situation. I was basically throwing it against the wall and seeing if anything would stick. To my shock and happiness, I heard back from at least 80% of the people I wrote to! (I know, I know–just what’s wrong with other 20%? But I like to concentrate on the positive.)

So, now that Mr. X has finally returned and I’m doing a lot better, (though surgery is still hanging over my head,) I just want to thank the following people from the bottom of my heart, for helping, and especially for being so willing to do so! My gratitude has been on my mind daily, and I’m glad to finally be able to laud the friends who’ve been there for me, most of them on more than a one-time basis, though I’m equally grateful to those one-timers, because that was certainly enough. [First names only, in case they don’t want to have to help others, too.

They are, in order of appearance at my door (whether by themselves or by way of delivery or errand): David, Lyndsey, Judy, Lila and Ron, Celia, Jeanine, Paul, Caryn, Candis, Carol, Lucia, Jann, Diane, Eadie, Cole, Patty, Steve, Benjie, Jarrod, Carole, Mimi, Pete and Nina, Thomas and Graham, Danny, Brian, Carolyn, and Jan. (And this doesn’t even include the people who sent sympathy cards or other expressions of condolence.) You’ll never know how much this assistance has meant to us.

And thanks to you, my readers, for indulging my thank you column, because I want to point out two important lessons I’ve learned from this all: 1)Mayberry has nothing on West L.A. And 2) It truly takes a village to replace Mr. X! And that just may be the understatement of the year!