Trending
You are at:Home»Uncategorized»MISCELLANEOUS: NAMING THE LITTLE PRINCE
By Karen Salkin on July 24, 2013 · Uncategorized

This one will be short and sweet. I just have to add my two cents to what the name of the new Royal should be.

As I stated in my sports column when Andy Murray won Wimbledon last month, I really feel that at least one of his two names should be in there somewhere. Most royals have several names, (even though none of them have a real last name,) so I figure what the heck. I know some other people who have sports-related names, some deservedly so, (such as Yankee great Robinson Cano being named for previous Dodger great, Jackie Robinson,) and others not (which I’ll tell you about down the line.) So why not throw in an “Andy” or a “Murray” somewhere in the new prince’s name? Let him have some colorful stories to tell! (At least ones he’ll be allowed to tell.) 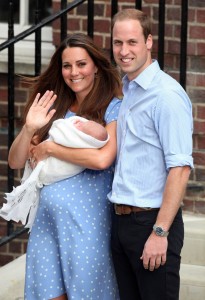 Kate and William leaving the hospital with the new Prince.

Of course, had the baby been a girl, I’m sure they would have fit “Diana” in there somewhere, if not as the first name. So how about “Dane” as a middle name for a boy? I’m sure that they’ll at least have “Spencer” as one of the names, seeing that that was Diana’s maiden name and a proper boys moniker at that.

Another thought is that, since he keeps being referred to as “The Little Prince,” perhaps part of the author’s name, Antoine De Saint-Exupery, should be in there, as well? Or “Rose,” because caring for his rose is a big part of the story. (Not to mention it’s my mother’s maiden name! But, as we all know from my e-zine’s title, It’s Not About Me!) But the novella ends sadly, (in my opinion,) so I don’t think I’ll vote for this one, even though it’s my own idea.

One name I’m sure we can all be certain will not be used is “Anthony.” That’s the first name of New York mayoral candidate Anthony Weiner who was once again disgraced this week, the day after the prince’s birth. No one needs a reminder of that debacle for the rest of his life.

So if it were up to me, the newborn’s name would be Spencer Andrew Murray Dane Cambridge. I wonder if I can place a bet on that one! Any takers?

[Note: If you feel like it, please let us know your choices in the Comments comments section below. I would really love to see what everything thinks about this one!] 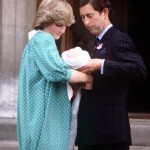 By the way, why has no one else mentioned these two points about Kate’s leaving-the-hospital dress? Did no one else notice that when Princess Di left the hospital after Prince William’s birth, she was wearing a green dress with white polka dots? So I really feel that Kate wore are a similar white polka-dotted dress (this one in blue) as a tribute to her husband’s mother. I bet she had one in pink, as well, just in case. (And that’s one bet I could place, if I did that sort-of thing.)