Trending
You are at:Home»Uncategorized»LIVE PRODUCTIONS: STARS ON ICE
By Karen Salkin on May 21, 2010 · Uncategorized

I saw Stars On Ice at Staples Center here in Los Angeles last night, and, as always, it was a lovely show. (Look for it in your city: www.starsonice.com.)They took a different approach this year, featuring up-and-comers rather than established stars, with an emphasis on Americans, so first-up is the overall view before I give you my thoughts on the performances.

One of the saddest show biz events in recent years was the folding of the premier ice show, Champions On Ice. For years it was the number one touring show and brought us the excitement of the recent skating champions in every category. It was an event skating fans waited all year for, and was jam-packed with varied and upbeat acts.

Stars On Ice was the second place show, and with its cast whose members who had hung-up their competitive skates years ago, was for an older, less hip audience. (But it was always entertaining, with a “family” feel.) When Champions closed shop about three years ago, Stars continued, but stayed the same. Now this year, they finally got wise and followed in the Champions footsteps by bringing in some of the skaters we all saw in this year’s Winter Olympics, making it, as Simon Cowell loves to say about these inane American Idol singers, “more current.” So, good for them. I applaud the effort.

While Stars On Ice, for some inexplicable reason, is missing the most popular young skater in the country today, Johnny Weir, who would have definitely pepped-up the show and brought the not-appreciative-enough-in-my-opinion audience to life, there are some acts who are not to missed. Most notably among them are Shen and Zhao, the married Chinese pair who won the gold medal, and ice dancing silver medalists, Davis and White, who entertained the crowd with their Indian-themed Olympic short program. I love Charlie’s new shorter, no-curls hair, but the black costume he changed up to (from his Olympic beige one) just didn’t look right next to Meryl’s red, beige, and teal one. [Note: I heard that Johnny’s doing a show in NY, so I’m hoping to see him there. The touring cities’ loss is NYC’s gain.] 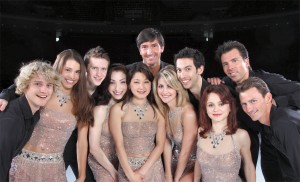 Now to the actual production, in no particular order. One of the most interesting aspects of the show to me, was seeing both American ice dance teams at the same time. While I really enjoyed their four-person number, there was also the tabloid factor, for you private-business-minders: just this week, Tanith Belbin (of Belbin and Agosto) and Charlie White (of Davis and White) announced that they’ve been a couple for over a year! That was really a well-kept secret. I had been wondering why she seemed so happy for the younger team to be beating her and Ben all season long and now I know–you can’t root against your boyfriend! And Ben is always gracious and lovely–he’s never been a bad sport at any time–so his overall happiness to just go to his second Olympics and do well didn’t seem odd to me.

The weird thing about the fact that the couple has been together so long is that it overlaps with the time period when Tanith was supposed to be seeing Evan Lysecek, which none of us believed to begin with, so what’s up with that?

While we’re on Ben Agosto, he played the electric guitar twice in the show, while skating around, and that was an absolute highlight! So unexpected and so fun. (Maybe he was bucking for a spot in the Ballas-Hough band, whom he performed with on Kristi Yamaguchi’s special last year.) He and Michael Weiss were the only two performers who showed us any personality, and this show sorely needs those two. [Note: I sat with Ben’s parents at the Nationals eight years ago, and they were lovely themselves. I see where Ben gets his demeanor from. Kudos to the ’rents!]

As usual, Michael had the most energy of everyone, and treated us to several of his patented back-flips–even twice in one number!!! (His dad, a former Olympic gymnast, is the one who taught it to Scott Hamilton, way back in the day.) He even threw in a little tribute to his old Champions On Ice roomie, (and my pal) Philippe Candeloro, with the latter’s knee-spin. Loved it!

Stars On Ice really lost the only sexiness they had with the departure of the gorgeous John Zimmerman and the adorable Ilia Kulik. Quel domage.

At least they kept Sasha Cohen, a fan favorite, and Yuka Sato, who’s as peppy and adorable as ever. She looks the same as when she won her World Championship in 1994!!! Amazing. And it was so cute to me to see her come out into the audience (just where I was sitting–no one else saw her) to watch her student, National Champion Jeremy Abbott, skate his first number. Cast-mates now, but ever the coach, I guess.

I was actually thrilled to see former US champ Alissa Czisny perform. She is the most beautiful skater out of America in a very long time, but her nerves keep her from competing at her highest level, so she’s widely unknown. I never expected to see her in a show, so props to stars for scooping her up. She has the loveliest hand and arm movements in the business. She spun like a jewelry box ballerina. In the second act, she did a fast-paced number, and it was strange to see the most elegant skater rock-out like that, but fun because I’ve never seen even one smile on her face, let alone though a whole number! Heart-warming to see.

Also heart-warming to see is that Todd Eldredge, at almost 39 years of age, is as dynamic a skater as ever! He, Yuka, and Michael seem to be in a time warp, which is great in this case!!! You go guys! (And girl.)

It was ridiculous to have Shen and Zhao, most gorgeous skaters that they are, open the show, when rude patrons haven’t yet arrived, and then not be seen again until the final bow. What a shame. They had been an integral part of the show in years past, and I can’t figure out why they would be demoted in this manner.

Maybe it’s because this show has really lost it’s former international flavor, which was the best thing about it. Outside of this pair and Yuka Sato, everyone’s American! With most of the best skaters in the world being from other countries, I think it was weird choice to leave them out. Perhaps they should change the title to American Stars On Ice.

Sadly, we also got only number from the fun and adorable Mirai Nagasu, who wowed the world at the Olympics, coming in fourth out of nowhere! I actually met her and teammate Caroline Zhang the last year of Champions, when they were backstage collecting autographs! When I told them that in a few years, fans would be lining up for theirs, they just giggled. (This proves–always listen to Karen!)

I’m sure many people were happy to see Evan Lysacek, but he did just one number, as well. (Which was plenty for me–not a fan.) I thought it was really pretentious, and so last decade, to skate to a Michael Jackson song. But I must admit that the performance was better than his usual self-indulgent offerings. He did sport a fabulous rhinestone glove, though. And has great posture. (Rachel Flatt should take a page out of his book–her head looks like a turtle’s sitting on her hunched-over shoulders. Not great for an otherwise excellent skater And she’s still a teen, not a little old lady!!!)

Evan did come in handy for one thing, though–because of his participation, some of the dancers from Dancing With The Stars were in attendance. I’m sad to report that Mark Ballas was rude and walked around the whole time, which was really distracting, and Edyta Sliwinska (on of my faves) and her hubby, Alec Mazo, left at halftime. (I think to go eat across the street.) How could dancers not want to watch skaters perform??? I consider it a privilege to get to see such amazing athletes work in person, and think other creative people would feel the same. And then the couple jay-walked across the street on their way back after the show. (I know that too well–they walked right in front of our vehicle without even looking!)

But Chelsie Hightower stayed at her seat at intermission and signed autographs and took pictures with everyone who asked. She was absolutely adorable doing it! Big props to her!

One more word about Evan–he took the mike for a few seconds to introduce someone, and the woman next to me said, “Get a new voice!” That was so funny because Mr. X and I can’t listen to his simpering, whiny, nasal tones either!

One audience behavior lesson, as always, when I find rudeness: the women behind me talked and texted the whole time. My advice? Don’t come to a show then!!! Do your business elsewhere and not while people are working their butts off performing, and others spent their hard-earned money to see them do so!

On a separate positive note, the Staples Center staff was wonderful as always. From Michael Roth and Cara Vanderhook to Jose in parking to Sally and Rochelle and Louis manning the sections–love them all. They make a big-time experience not so scary and impersonal. A big thanks to them.