After seeing this incredibly unique musical presentation from China, I still don’t understand the title, nor the Chinese language all the singing is in, but none of that matters.  Memory 5D+ is a wonderful production, in all manner of artistry.  It was fascinating from the moment we entered the auditorium. 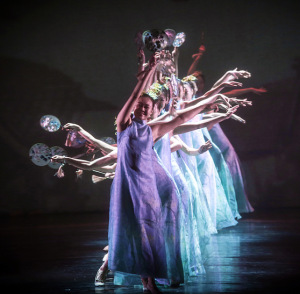 Since I had interviewed some of the principal players a month or so before Memory 5D+ arrived at the Pasadena Civic Center, I had a feeling it would be spectacular.  (If you missed that column, you can still read my preview here: itsnotaboutme.tv/news/upcoming-event-memory-5d.)  When Mr. X read what I wrote about the show, that was still upcoming at that time, he even agreed to come with me to see it, which I have a feeling that most of you know just how rare of an occurrence that is!

And, as usual, I was correct!  The creativity was a sight to behold!  And a treat for the ears, as well.  Actually, it was a treat for other senses, too, which I’m going to tell you about in a bit. 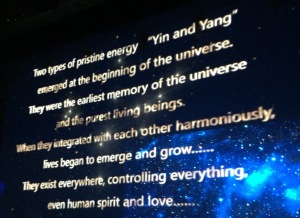 The explanation of the story, shown on the scrim at the beginning of the show. (Can you tell that I was sitting on the side?) Photo by Karen Salkin, as is the big one at the top of the page.

There is a slight story to the program, which an announcer told us right at the beginning, but I really don’t think that matters at all. We just took it as an experience with many different stunning offerings. I do know that it’s a tale of the concept of yin and yang, which are personified by two wonderful dancers, Zhang Yixiang and Zhao Lei. They perform throughout the show, as does female dancer Zhou Lijun. Some others do just one number each, and every single one of them is superb and exquisite!

I didn’t know where to look for some of the numbers; there was so much going on in them!  For example, in one number, there was the beautiful music, which was brought to us by musicians and singers, and a dancer/contortionist moved slowly across the stage in a surreal way, while about twenty beautiful ladies surprised us by walking slowly down the aisles, holding glowing pink flowers.  And, all the while, the spellbinding holographic projections were mesmerizing us.  I needed to see that one number about five more times to catch it all!!! 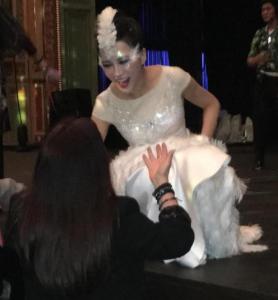 And those “aisles walkers” weren’t the only special happening during the production. How’s this for special–as flowers appeared on the scrim, we literally smelled them!!!  What a fabulous surprise!

My gorgeous New Best Friend, Lucina Yue, not only played the harp like an angel, but she looked like one, as well. And her vocals matched it all. I can’t imagine how hard it must be to sing while playing the harp, of all stringed instruments. That whole number, accented by a beautiful dancer, was magical.

Mr. X and I both loved that the projections extended beyond the sides of the stage. And there were two levels of the visuals to begin with. Some were on the backdrop screen, while different ones showed-up on the scrim, which stayed in front of the performers until the very end, to give us that extra panoramic depth. That the ethereal images went all the way back to the balcony was the icing on the cake. 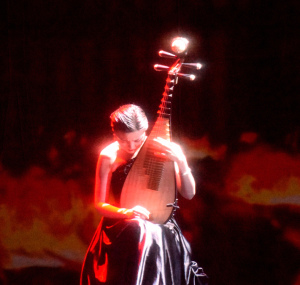 A major highlight of the show was a rousing number played by Zhou Siyao on the pipa, which is a short-necked fretted lute, an unusual instrument that reminded me sort-of of a vertical guitar.

And aerialists, The Xiangyun Brothers, were perfect. They brought the right amount of pizzazz to the show, without horrifying Mr. X, who’s usually not a fan of acts that feature possible danger to the entertainers. Our mouths were hanging open during their numbers, and the audience joined us in gasping at their feats. 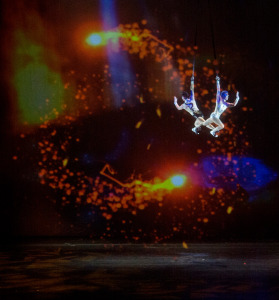 I was looking forward the most to hearing the Tuvan throat singing, because it’s so not the norm in entertainment in this country, and I was not disappointed.  At all.  I had seen it performed on TV only a time or two in my life, and the individual was just standing there singing in that manner, so I loved the surprise of hearing it performed in songs this time, accompanied by traditional Chinese instruments. It sounded just like Tom Waits. Maybe he’s part Mongolian, and we never knew!

Mr. X said he was touched by the “delicate beauty” of Memory 5D+. On the way home, he added that the entire production was “classy and transporting.” (I think he should be writing all these reviews instead of moi, n’est pas?) I agree with all of his assessments, and was awed myself by the entire presentation.

Just some of the muscians, including the Tuvan throat singers. Photo courtesy of Memory 5D+.

There was actually only one tiny, shallow thing that could have made the experience better for me—at the very end, as we were wildly applauding, several members of the cast brought out beautiful blue scarves, and bestowed them upon audience members who seemed to know what was coming; they all rushed right up to the front of the stage to receive them. I was sitting close enough to get up there as soon as I realized what the routine was, but I didn’t know if it would be insulting to the culture for a non-Chinese person to get one, so I hung back. But once I found-out that the scarves symbolize good luck, (not to mention that they match my eyes!,) I’ve been regretting my politeness ever since.

So, I’ll just have to be content with the fact that my good fortune was in seeing Memory 5D+ to begin with! I hope that someday, somewhere, you all will be as fortunate.