Trending
You are at:Home»Uncategorized»LISTS: PEOPLE WHO MAKE ME LAUGH
By Karen Salkin on December 21, 2010 · Uncategorized

PEOPLE WHO MAKE ME LAUGH

These are pretty much in order, and most don’t need an explanation.

2) Ronnie Hazel, Jr.–the only kid who made the list, Ronnie’s been my favorite friend for the past twelve years. (He’s now seventeen, and even though I’ve loved him since he was born, and we had some fun times when he was two, we really bonded when he was five. He’s truly magical. Maybe I should do a list of just his bon mots! Hmm.)

3) May Rose Salkin–the only real female (see below) who made the list, so kudos to you, Ma! 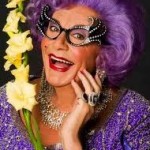