Trending
You are at:Home»HEALTH»KAREN’S RANT’S/HEALTH: PLEASE STOP WITH THE DRINKING JOKES AND MEMES ALREADY!
By Karen Salkin on September 29, 2020 · HEALTH, KAREN'S RANTS

PLEASE STOP WITH THE DRINKING JOKES AND MEMES ALREADY!

Why do so many people, especially celebrities, think that it’s cool to mention that they need/want/took a drink all the time? I don’t get it. They should all be doing the opposite, since, especially in the case of the celebs, so many youngsters want to emulate them! 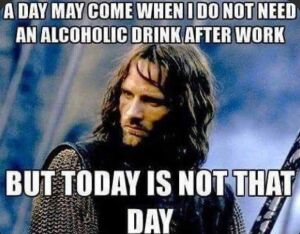 Here’s an example of this stupidity.

And no, I am not a “Friend of Bill.” (That’s the Alcoholic Anonymous euphemism for being an alcoholic. I’ve had way too many pals in the program, so, very sadly, I know that kind of thing.) I’m also not a teetotaler, per se. Even though I really do believe that no one should drink, for many reasons, there’s only one reason I do not imbibe. And that is…I detest the taste of alcohol!!! I don’t know how anyone can even swallow that nastiness, especially beer. That substance tastes like vomit! For reals.

One time, I was with my good friend Joseph at a big public event, and his brother met us. Joseph offered his bro a drink, and didn’t offer me one, so his sib said, “My brother very rudely didn’t offer you a drink,” whereupon I replied, “He knows I hate the taste of alcohol.” To which the guy stated, “You’re blessed,” so I correctly figured-out his struggle with the substance right away.

Another time, my younger friend Lyndsey and I were having lunch when she was suffering a hangover from the night before, so we discussed drinking. All of a sudden, she asked shockingly, “You’ve never been drunk?!” And I’m proud to say that, yes, I never have.

But I’m one of the few lucky ones for whom alcohol is not a temptation. I realize that. I’m not preaching here. 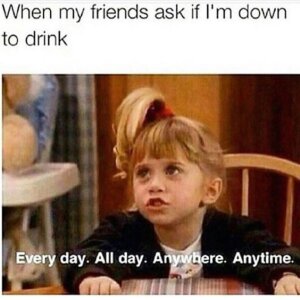 And perhaps an even worse example!

I’m just saying—keep it to yourselves! People seem to think it’s amusing to say they need a drink all the time. I can’t go onto Facebook and not see at least three or four stupid images of people lauding drinking, with sayings like, “It’s wine o’clock somewhere,” and “Vodka is getting me through this.” And then their Facebook buddies get in on the action of calling for a drink. It’s just creepy and disturbing. Are these people alcoholics? Or do they think it’s cute and/or amusing to talk about it all the time? Would it be okay to keep insisting they need a heroin fix? Where does their “cuteness” end?

I’m especially surprised when I see my fellow Brooklynites stating that stupidity. When and where did they learn that behavior??? Growing up there, all through high school and two years of college in that borough, I never saw any of my compatriots drink! Never. I saw lots of marijuana smoking in those last two years, but never drinking, not even at my boyfriend’s fraternity parties. We never even had “keggers” in that neck of the woods. So why do they keep writing that they need a drink now? Have their lives gotten so awful and desperate since we were teen-agers? 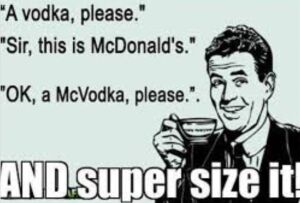 And one more not-at-all-funny meme.

I moved out here to LA in my late teens, for the next two years, and also saw only dope smoking, and a lot of cocaine, too. Then I moved to Rhode Island for the next two, and felt like a stranger in a strange land! All anybody ever did was drink! The group I was in, because of my boyfriend at the time, basically ostracized me for not drinking. It was crazy.

But, okay, that was all my own experiences. But right now, I’m just talking about the glorification of booze. For another public example, Blake Shelton thought it was amusing to recently joke, “2020 sucks and I refuse to spend another minute sober!” That’s the kind of thing I feel is totally unnecessary. I just don’t get the thought process behind declarations like that. 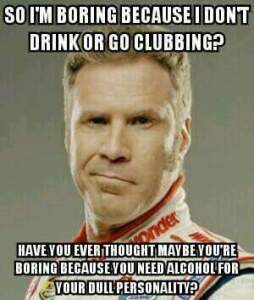 Now, this is the kind of drinking meme that makes sense to me!

I’m imploring anyone who reads this to think over your participation in the booze culture. And hopefully you’ll realize that you should be part of of the solution, not the problem. If you need a cocktail or two every now and then, sure, go on and enjoy it. (As long as you’re not driving or taking care of children.) But please, please, please—stop thinking it’s funny to advertise your “need” for liquor all the time! No one needs to know about it. It’s not cute, clever, or amusing. It just makes you seem desperate to fit in with the others who talk about it all the time. And you might just be hurting someone down the line. Everything in life has a ripple effect, and this is one pebble you do not want to cast. 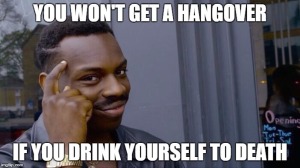 By the way, this is not about stopping anyone from drinking, (although that would also be a good thing.) It’s about stopping you from mentioning it all the time. But if you do need some motivation to stop drinking, here’s one article that I hope might help with that: www.self.com/story/a-young-woman-shared-a-shocking-photo-of-herself-to-raise-awareness-about-binge-drinking.