Trending
You are at:Home»KAREN'S RANTS»KAREN’S RANTS: THE COMPLETE INSENSITIVITY OF ALEX BALDWIN (AND FAMILY)
By Karen Salkin on November 4, 2021 · KAREN'S RANTS

THE COMPLETE INSENSITIVITY OF ALEX BALDWIN (AND FAMILY)

Okay, I’ve stayed silent on this new Alec Baldwin situation for long enough. But with all his activities on Halloween week-end, I must weigh in now. 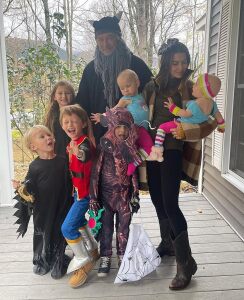 The Baldwin brood trick-or-treating in 2021 as if Alec does not have a care in the world…other than that he just killed cinematographer Halyna Hutchins.

Yes, of course I’m aware that the man must feel terrible for killing someone! But he’s sure not letting that stop him from going about his life. And that’s what I take issue with.

This is what I tweeted late Sunday night, when I saw the nauseating pictures of him trick-or-treating with his kids, dressed in a costume no less: “What is wrong with AlecBaldwin??? He had some nerve to put on a costume and take pictures with his family for Halloween. How does he not have the sensitivity to realize that the son of the woman he just killed would be having the worst holiday of his young life?! Disgusting.”

And it got picked-up everywhere. More on the reactions to my tweet in a minute. But first I must discuss the topic a bit further here, where I’m allowed more than two hundred characters. A lot more.

Alec Baldwin should be lying low somewhere. If he feels his depressed presence will adversely affect his children, he should go away by himself. And if his excuse for this most recent behavior is that he didn’t want to ruin Halloween for his kids, he should have just let his creepy fake-Spaniard wife take them trick-or-treating. Or one of his *brothers and their families could have done it. Most of his kids are too young to even know what’s going on anyway. And not both parents need to go trick-or-treating with their kids! And babies never need to go! Alec could have stayed home with the two infants, and let his wife take the four older ones. Period. *[Note: Yes, it appears these Baldwins celebrated Halloween a few states away from any of his family, but they could have arranged the location better if the occasion was so important to him that he didn’t mind hurting the family of Halyna Hutchins, the woman he had just killed.]

Even if he feels the need to be around his wife and kids at this terrible time, it’s not right of him to constantly be in public like that, dining out, (in a bar no less, when he’s an alcoholic,) celebrating the most frivolous holiday of them, Halloween, and traveling around New England; it’s just too much. Way too much.

Even if he and his detestable spouse don’t know any better, how does he not have a publicist who does? Wouldn’t the movie on whose set he shot and killed the cinematographer, of which he was an Executive Producer, have a publicist who could advise him of how to be a human being???

On a personal note, I can’t stand that man. I’m ashamed to say that I actually stuck-up for him many moons ago when I played his secretary in an awful movie way back in the day. I got to the set on the day of my scenes, and immediately heard rumblings of how difficult and contrary Alec was. I saw him being rude to the producers, but I thought it was to help others, so I gave him the benefit of the doubt. And then he was so nice to me–he told me he’d come get me if they were ready for our scenes, which the star of the film does not have to do for an an underling actress such as myself. So I thought well of him for a few years. 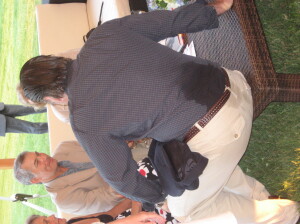 Alec Baldwin (and his sweaty rear) in the Hamptons. Photo by Karen Salkin.

But then I ran into him again in the Hamptons a dozen or so years later, and he was a total d-bag. We were both guests at a very exclusive cocktail party thrown by Ethel Kennedy and her daughters. It was an intimate affair, so everyone who was there was considered to be somewhat important, (like the Kennedys and Harry Belafonte; I was low-man on the totem pole, of course.) All of a sudden, I noticed Alec, (and his very sweaty butt,) and the friend I was with encouraged me to go say hi. I wanted to tell him how nice I thought he was all those years before, so I bravely reintroduced myself. I opened with, “I have a nice story to tell you about yourself, from when we worked together on a movie years ago, although I have a feeling it was probably your least favorite film you ever made.” He really wanted to know which one it was, so I told him. And then he became attitudinal towards me, and walked away without hearing the nice story about him; he didn’t even say good-bye! He made the encounter super-uncomfortable for me, and put a damper on that whole evening. And I had just said hi to him for the express purpose of complimenting him; there was absolutely no reason for him to be so nasty.

But his recent behavior takes the cake. Of course I feel awful for him. So many people seem to be focusing on exactly who is to blame for that gun being loaded on the set. No matter whose fault it was, Alec Baldwin still killed someone!!! And he has to live with that guilt for the rest of his life. But the way he’s going about his activities now is what’s questionable. He needs to just lie low. And if that means being away from his attention-seeking wife, then so be it. Has he no friends who can help him out for a bit? Maybe his whole brood should just disappear to his wife’s native Spain for a while. Oh yeah, that’s right—she, a native Bostonian, made-up her whole backstory about being from Spain!

But let’s get back to my tweet about Alec Baldwin’s Halloween, which has caused quite the stir. The tweet brings us into my next thoughts on this subject. I’m glad to see that it was re-posted in several publications, not for my own “fame,” but rather to make sure that the Baldwins were called-out for their extreme callousness. [Note: On the shallowest of notes, I knew that I had misspelled “sensitivity” right away, and went back to fix it. But Twitter does not allow edits, and I already had a few “likes,” so I left the mistake in, not expecting even close to the attention it attracted. So now my former-teacher self is still stewing over the error.]

Most of the commenters agreed with me, but one woman sarcastically asked: “How dare his children have Halloween! They must pay for their father’s mistakes!!!,” to which I replied: “His children are totally welcome to have fun! They have a mother, siblings, and an abundance of relatives to take them trick-or-treating. But he should be lying very low for a long while, and not out in costume, smiling, with his wife posting pictures of their happy fam.” 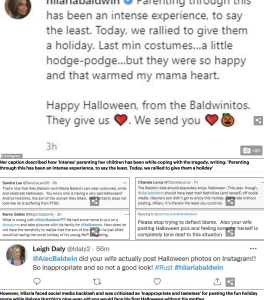 My big issue is with his absolute insensitivity for his victim’s devastated husband and nine-year-old son. Does Alec Baldwin think the Hutchinses are out cavalierly trick-or-treating??? I hope the son did go out, just to start living life again. But whether he did go or not, I can imagine how it must hurt that boy and his father to see the Baldwins having a jolly old time, with their family intact.

Making it all sooo much worse are his horrible wife’s words on Instagram: “Parenting through this has been an intense experience, to say the least. Today, we rallied to give them a holiday. Last min costumes…a little hodge-podge…but they were so happy and that warmed my mama heart.” She thinks parenting has been the “intense experience???” How about a man losing his wife and a young son losing his mother, and in such a tragic way??? How insensitive can she be?! Is she devoid of all sympathy, empathy, and human kindness??? I’m afraid so.

Speaking of social media posts, someone responded to my tweet with this ingenious missive: “Firearms expert Steve Wolf told The Post last week: ‘If that scene required [Baldwin] to put the gun to his head and pull the trigger, I’m sure he would have taken a look inside the gun. Wouldn’t you?’” 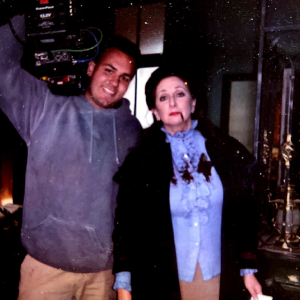 Karen Salkin (with one of the film’s camera men) after her bloody hostage bit on a western movie she did back in the day.

And as a matter of fact, my answer is yes. I had my own experience on a movie set that, while not even close to exactly the same, does relate to that concept. When I did a western film (don’t ask) a number of years ago, my character got killed by the bank robbers. (Of course.) So the producers expected me to wear “squibbs,” which are small detonators that are used to simulate gunfire on films.  I was assured they don’t hurt, but I stood my ground, so they had to shoot me (in both senses of the word) from outside the bank in which we were held hostage, (which means they shot that part of the scene without anyone shooting a firearm at me in real life,) and I just fell down and “played” dead. I was smart enough to not risk anything harming me, especially when I was not in charge of the props! I would not put my life in the hands of others. So I agree that is Alec himself was the one getting shot with it, he would have made sure to check everything about that pistol beforehand!!!

On a side note, bad judgement seems to run in that family. For example, his daughter and her boyfriend chose to wear bloody costumes on Halloween. I’m not sure exactly what they were supposed to be, but so shortly after her father had just killed another female, who was most likely bleeding from the gunshot wound as she was dying, how did Ireland think this was anything close to a good idea?! And when Alec was trying to be nice to the press for once in his life by stopping and answering their questions on his Vermont vacay last week, Hilaria could not stop herself from butting in, making Alec look worse. What is wrong with that woman? But I was gratified to see him finally snap at her a few times. Maybe that will be his new MO–rather than fighting with the press and coddling his wife, he’ll flip around his attitudes towards both of them. 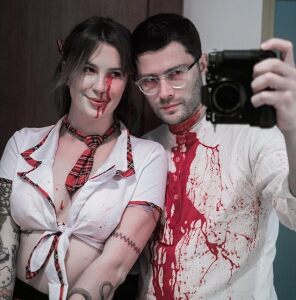 And while I’m on this rant, let me say that that woman is totally exploiting her kids. The even moderately-smart people in the public eye do everything they can to shield their children’s faces from the public, especially with there being so much crime, of every sort, right now. Even young, not-the-brightest-bulb Zayn Malik recently blew-up his relationship with Gigi Hadid over her mother posting a picture of their daughter’s face!!! But to make sure I was reporting everything correctly on here, I checked-out Hilaria Baldwin’s Instagram for the first time. And I was shocked to find that it is all pictures of her family, mainly her children!!! That’s just crazy.

Last thing—as most of you know, I’m a major Democrat, as is Alec Baldwin. So obviously, my thoughts on this matter are not all political—they’re only human. On that note, my heart goes out to Halyna Hutchins’ family. I hope they can find some peace in the near future.