Trending
You are at:Home»Uncategorized»KAREN’S RANTS: “FINAL” VERSUS “FINALS”
By Karen Salkin on December 19, 2013 · Uncategorized

All I can say on this topic is “Grrrr!” There are few speech errors that rub me the wrong way as much as adding an “s” onto the word “final” when you’re talking about just one! And because I watch so many competition shows, I have to hear that misuse all the time. [Note: Alex from the duo Alex and Sierra on The X Factor is the only person I’ve ever heard on those shows who says the correct word. Yet another reason I’m rooting for those two to win tonight!] 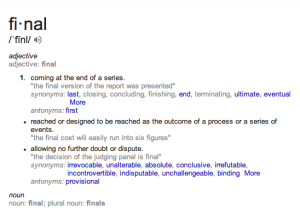 I’ll make this lesson brief, but please listen, people, and learn. When the word refers to just one final entity, such as the last contest of a competition show, that is a “final.” Period. If you’re talking about the last contest on several shows, then you’re referring to the “finals,” in the plural. But each series has just the one final, so the plural should never be used on those. Never ever. Never!

This is my theory on why so many people are idiots who have to use the wrong word: it came from school, when we had multiple finals. Everyone would say, “My finals are next week,” or “This is finals week,” which is correct because we all had more than one final. (Some of you still do!) Schools do them at the end of the term, hence the word “final.” And because there are multiple tests, we use the plural of the word. Duh.

But these television shows, on which the word is almost always used erroneously in the plural, have just one, solo, uno, individual, lone, solitary final. The word “final” should be singular.

When these hosts and contestants pluralize the word, it’s like nails on a chalkboard to me. So, I hope that this column has helped at least some of you to see the light. And I hope this is the final time I have to write about this situation!